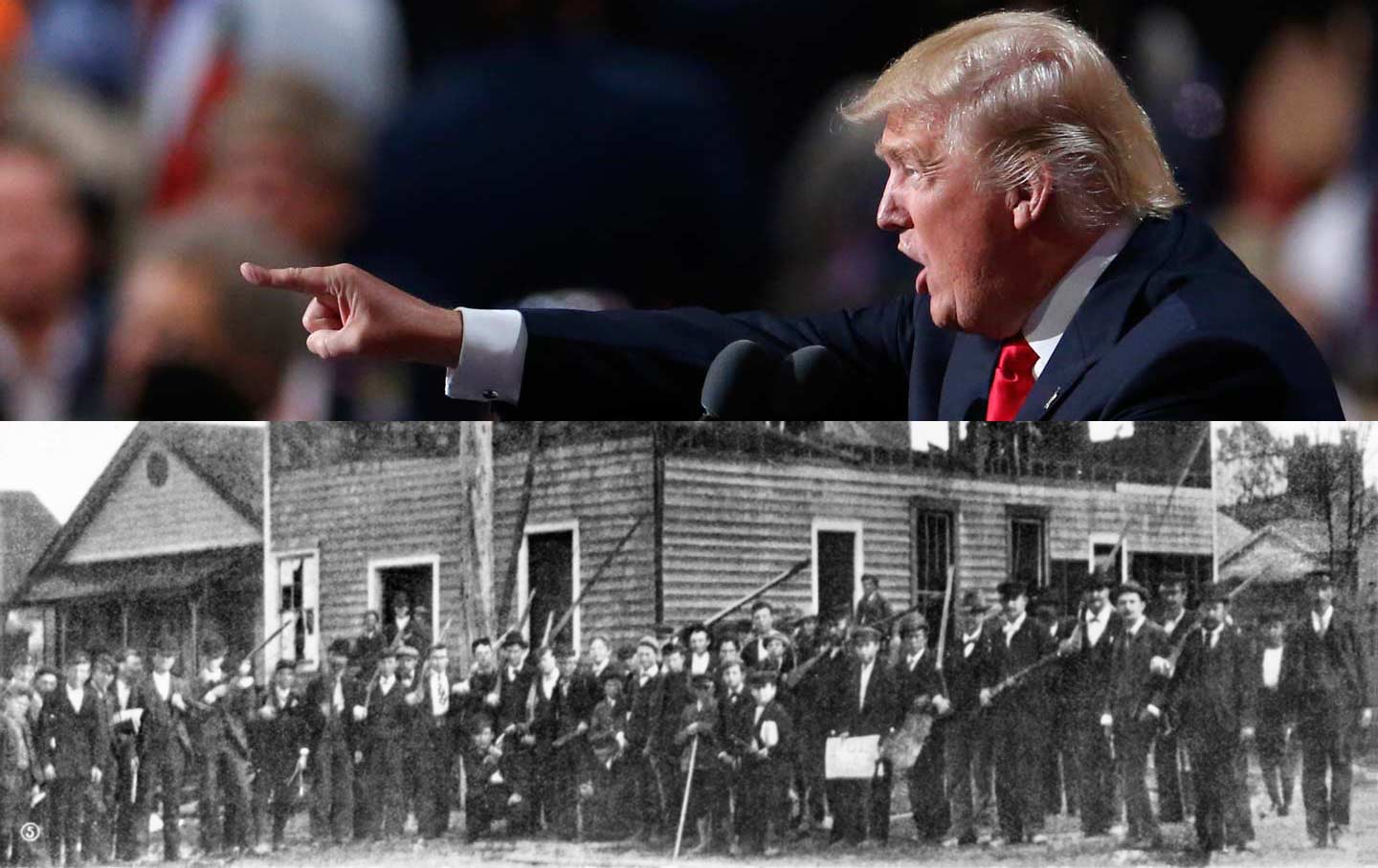 Top: Donald Trump. Bottom: A group of rioters pose outside the ruins of the Record building in Wilmington, 1898. (Top: Reuters / Carlo Allegri; bottom: Library of Congress)

Stopping on the campaign trail in Wilmington, North Carolina, Republican presidential candidate Donald Trump suggested that violence may be the only way to stop Hillary Clinton. He spent the following day basking in the shock value of his words, while maintaining that he’d been misunderstood. I’m not sure Trump understands the demons he has unleashed, but Wilmington is a good place to learn.

‘Hope’ Is a Verb, and It Can Revive Our Democracy

About 120 years ago, Charles B. Aycock, a leader of the white-supremacy campaign in North Carolina, aroused a crowd of angry white men looking for someone to blame for their problems. Aycock pointed at my ancestors, who had been enslaved in eastern North Carolina, and to their white neighbors, who had formed a Fusion party to vote together for policies that led to economic development for all families. Aycock suggested that the white race would be justified in using violence to overthrow a Fusion government in Wilmington, the state’s largest city at the time.

Two years later, following a Fusion victory in the election of 1898, Aycock’s crowd turned his words into deeds. Scores of angry white men burned down the only black-owned daily newspaper in the state, rampaged through the streets with a Gatling gun, shot dozens of un-armed African Americans, and banished from Wilmington every black and white Fusionist leader. This white-terror attack—the only successful coup d’état in a large American city—was sanctioned by every white church in Wilmington. It was also the precursor to many copycat white terror attacks, which firmly established Jim Crow laws throughout the South.

Donald Trump doesn’t need to know Aycock’s story to know the power of an appeal to white rage in North Carolina. He repeatedly calls Hillary Clinton “crooked,” then smirks when his crowds yell, “Lock her up!” Every Southerner, black and white, knows exactly what he was suggesting when he said the “Second Amendment people” know what to do if Clinton is elected.

Trump’s methods line up with the historic pattern of white hate groups who wait for politicians to use code words to call them to arms. Secret and not-so-secret political societies have been aroused by the success of multi-ethnic fusion coalitions across the South. Right here in North Carolina, political and corporate elites have spent pornographic sums of money to suppress the votes of a fusion coalition mobilized by our Forward Together Moral Monday Movement. Just two weeks ago, a federal court overturned North Carolina’s voter-suppression law. Trump knows it just got harder to win this swing state. I am not surprised that he would tap the repressed hatred of angry white voters.

But my heart is troubled when I see some of my fellow clergy publicly supporting him. These great grandchildren of the preachers who endorsed white terror in Wilmington are repeating the worst mistakes of our past. They are also rejecting the good news of a moral movement that is deeply rooted in this state’s history.

While Wilmington is home to a history of white terrorism, it is also home to Fusion party history, which has been a model for our Forward Together Moral Monday Movement over the past decade. Facing our history, we learned not only to face our demons but also to draw on the wisdom of those poor black and white farmers who learned after the Civil War that they had more in common than the plantation owners wanted them to believe. These unlikely partners who came together during Reconstruction paved the way for coalitions of black and white, rich and poor, civil rights and labor leaders, who joined hands in the civil-rights movement. Today, as white people become one among many minority groups in this country, we need fusion coalitions more than ever. Here amidst the ghosts of Wilmington’s past, we have seen just such a coalition arise.

Wilmington’s bloody history makes clear just how dangerous Donald Trump’s careless words can be; but the blood that cries out from this land also bears witness to the possibility of a Third Reconstruction in America. Maybe the spirits of those noble women and men who died in hope of a better America will stir us to stand against hatred and calls for violence, vote this fall, and work together in fusion coalitions for the United States we’ve not yet been.