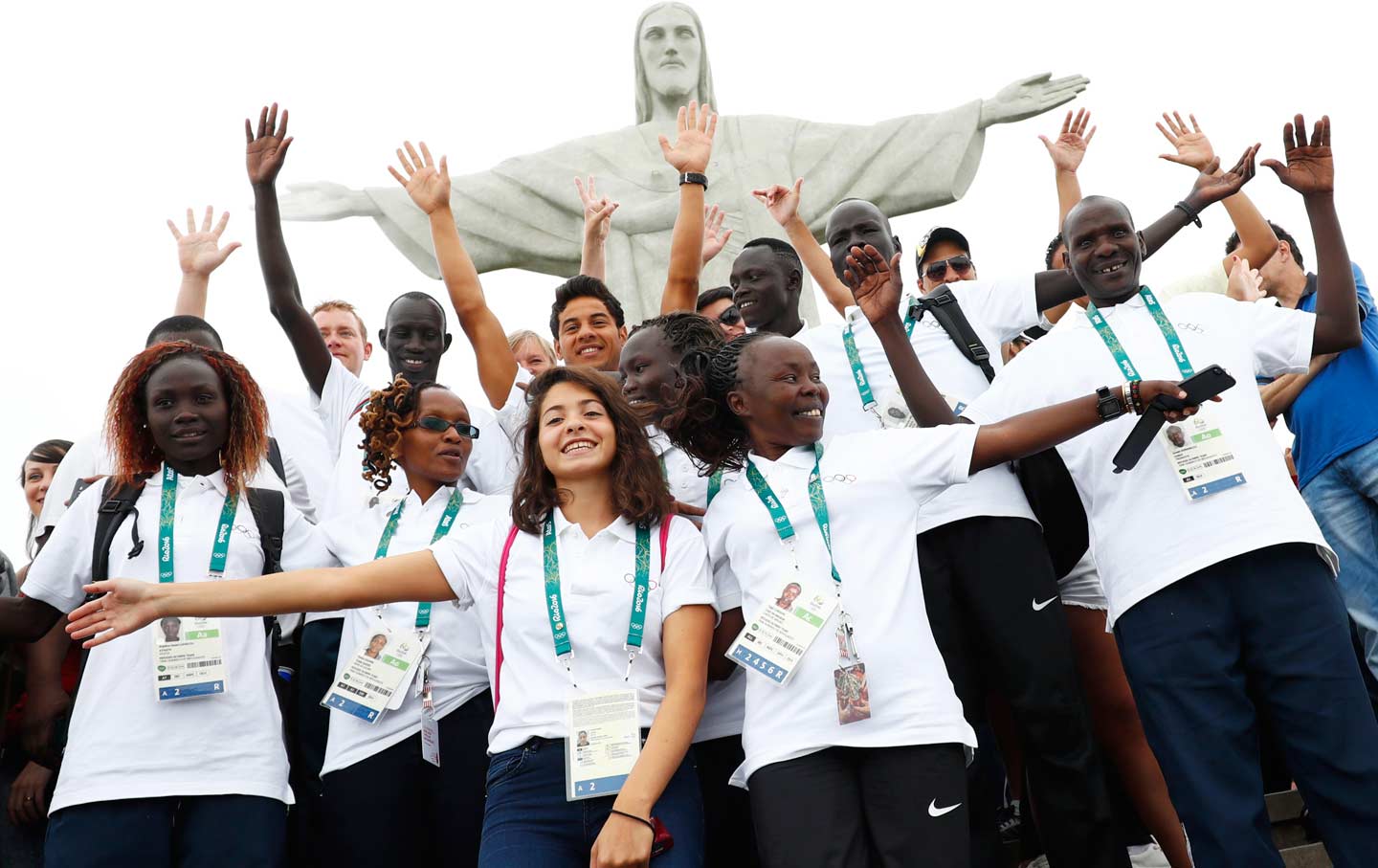 In an Olympics where “feel-good” narratives are few and far between, there is one storyline that journalists and Olympic lovers are clinging to like it’s a life raft in polluted Guanabara Bay. This is the tale of the first-ever All-Refugee Olympic team and, without question, their journeys are remarkable.

These 10 athletes will march into the opening ceremonies on Friday under no nation’s flag. Instead, only the Olympic flag will be unfurled, and the 10 competitors—the youngest of whom is 13—will represent the exploding refugee population sprawling across the globe, currently estimated at more than 60 million people.

They are swimmers from Syria, judo athletes from Democratic Republic of the Congo, and runners from South Sudan. They are testaments to the capacity of a human being to persevere. Expect to hear often, for example, the story of Yusra Mardini from Syria, who swam for three and a half hours, guiding a small boat with 20 refugees. She is 18. “We don’t have the same language. We’re all from different countries. But the Olympic flag united us together, and now we are representing 60 million [people] around the world,” she said at their first press conference in Rio. “We want to show everyone that we can do anything. Good athletes. Good people.… refugees are normal humans that had to leave their homelands. Not because they wanted to, not because they wanted to be refugees or run away or have drama in their lives. They had to leave.”

Upon their arrival to the Olympic village, they received a “rapturous welcome” and were mobbed by hundreds of other athletes. Expect a similar reaction when they walk out onto Maracanã Stadium for the opening ceremonies.

And yet, there is something about this story that strikes a discordant chord. It sounded off for me when I was reading one of the heart-rending backstories of these brave athletes and all of the sudden this quote from International Olympic Committee president Thomas Bach popped up on my screen:

These refugees have no home, no team, no flag, no national anthem. We will offer them a home in the Olympic Village together with all the athletes of the world. The Olympic anthem will be played in their honour and the Olympic flag will lead them into the Olympic Stadium. This will be a symbol of hope for all the refugees in our world, and will make the world better aware of the magnitude of this crisis. It is also a signal to the international community that refugees are our fellow human beings and are an enrichment to society. These refugee athletes will show the world that despite the unimaginable tragedies that they have faced, anyone can contribute to society through their talent, skills and strength of the human spirit.

Thomas Bach is someone acutely aware that the Olympics are in trouble: Citizens in potential host cities have been vocal in wanting no part of the massive social disruption that the Olympics bring. One of the reasons listed by protesters from Boston to Krakow is that the arrival of the games invariably means displacement for poor and vulnerable residents. That displacement creates what the United Nations call an “internally displaced person” or IDP. Every Olympics creates IDPs, the high-water mark being the staggering 1.5 million in Beijing back in 2008. Whether in Atlanta or Seoul, the Olympics have been a place where people became homeless because of the demands of the IOC.

Rio has had 77,000 people internally displaced since they were granted the Olympics in 2009. The most high-profile evictions went down mere yards from the Olympics in the community of Vila Autódromo, which only this week finished evicting the last holdouts. As I have met many of the families of Vila Autódromo who have faced down violence and heard their stories, I find that first line by Bach to be borderline obscene.

Read it again: “These refugees have no home, no team, no flag, no national anthem. We will offer them a home in the Olympic Village.” A temporary home is offered for 10 people, while hundreds of families are displaced from their actual homes. The stories from Vila Autódromo may not inspire journalists in the same way, but they are no less harrowing: accounts of elderly people being threatened, doors knocked down by police with guns drawn, and neighbors severed from one another. It’s not a feel-good story, but the villagers’ bravery is no less a testament to the human spirit, and you better believe it is an Olympic story.

I will never forget meeting Sandra in May. One of the few who refused to be be bullied or bought off, Sandra said that she was holding out because “it’s important to have a place for working people to live in Rio.” She then said, “They should give out Olympic medals for taking people from their homes.”

We all have heard the phrases “greenwashing” when a company or government hostile to environmental issues puts up a phony front to win undeserved public support. I don’t know if “refugee-washing” is a word but maybe it should be.