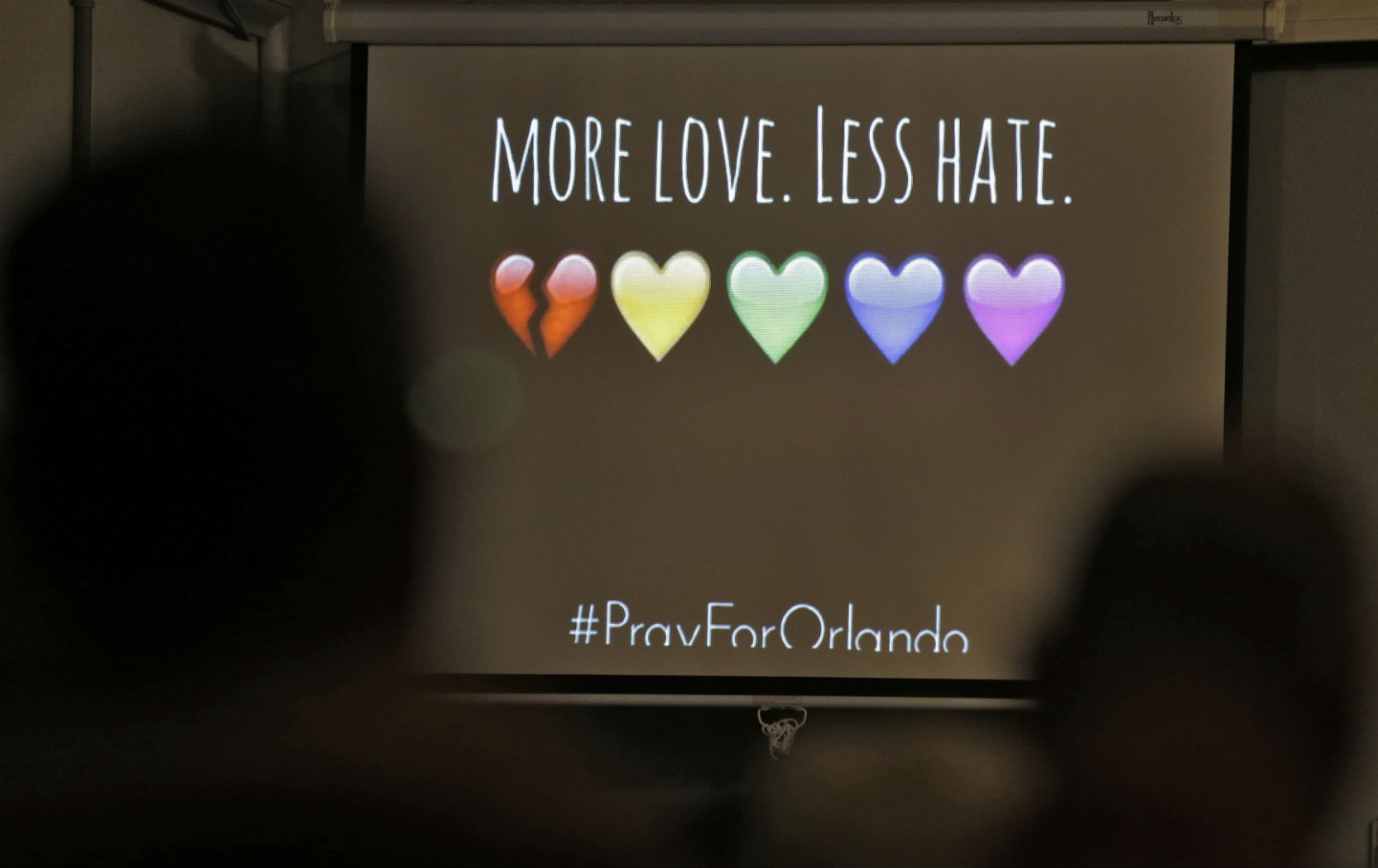 A message of the screen during a prayer vigil at the Joy Metropolitan Community Church after a fatal shooting at the Pulse nightclub in Orlando, Florida, on Sunday, June 12, 2016. (AP Photo / Chris O'Meara)

There are no words regarding the emotional whiplash I feel, having attended Muhammad Ali’s funeral on Friday and now, on Sunday, attending a vigil in Washington, DC, for the 50—and counting—slaughtered at the Pulse in Orlando on Saturday. Was this really all the same weekend? The juxtaposition is beyond tragic.

To hear about the remorseless killing of predominantly Latino LGBT people during Pride month is shattering enough. To then see Donald Trump and a collection of the worst anti-gay bigots be boastful, almost gleeful, about it because the shooter was Muslim is all the worse. Muhammad Ali, as eulogist Billy Crystal said, truly devoted the last half of his life to building bridges. These bridges are fragile; that’s what makes them matter. It is so much easier to just burn them down, and that is exactly what one shooter aimed to do, and now in death he is being assisted by an entire right-wing apparatus, which despises bridges about as much as it detests irony.

Never mind that by all accounts, we know that the shooter—whose name I will not write—was an American citizen. Never mind that he bought the automatic weapons legally, or was a violent misogynist, or worked for one of those shadowy global private security firms for almost a decade, or wasn’t even religious. The fact is that powerful people are demanding their villain of choice. So it won’t be the gun nuts, or those poisoned by seeing women as objects of violence, or the internal culture of these private security firms. It will be Muslims. That’s their narrative of choice.

It’s all so awful. And yet I can think of no better response to this cavalcade of hate than the message of Muhammad Ali ‘s funeral. The entire interfaith service was a testament—an act of resistance—against anti-Islamic bigotry, symbolized by the fact that the most powerful voice against this strain of hatred was Rabbi Michael Lerner, although he was hardly alone. The entire day brought together people of all faiths and no faiths from all over the world to celebrate a person who was tough enough to stand up to empire, racism, and the US state, as well as kind enough to care about the future of humanity.

At the painstakingly constructed service, as she said goodbye to her husband of 30 years in front of family, friends, 22,000 people at KFC Yum! Stadium, and the world, Yolanda Ali spoke the following truth. She said, “Muhammad wants us to see the face of his religion, al-Islam, true Islam, as the face of love. It was his religion that caused him to turn away from war and violence. For his religion, he was prepared to sacrifice all that he had and all that he was to protect his soul and follow the teachings of Prophet Muhammad, peace be upon him. So even in death, Muhammad has something to say. He is saying that his faith required that he take the more difficult road. It is far more difficult to sacrifice oneself in the name of peace than to take up arms in pursuit of violence.”

She also said the following, and it is sending a chill down my spine to even transcribe these words: “You know, as I reflect on the life of my husband, it’s easy to see his most obvious talents. His majesty in the ring as he danced under those lights enshrined him as a champion for the ages. Less obvious was his extraordinary sense of timing. His knack for being in the right place at the right time seemed to be ordained by a higher power.”

We need—desperately—to recognize the timing of Ali’s passing, crossing the same weekend as the worst mass shooting in US history since Wounded Knee. We need to use his death to promote an alternate vision to the competing fundamentalisms that want to turn our world into two warring camps: camps that hold a common agreement of seeing the LGBT community as something to demonize, oppress, and, when opportunity strikes, kill. We need the memory and voice of Muhammad Ali now more than ever. We need to remember the person who understood the importance of using his own funeral as a last act of resistance. We need the example of someone who said, “In war, the intention is to kill, kill, kill, kill and continue killing innocent people!” That war has come home, not just in Orlando but amid the lives of innocent families across the Middle East.

We need, above all else, the example of someone who put it all on the line to resist this mindless violence, because that will be our task in the very immediate future.