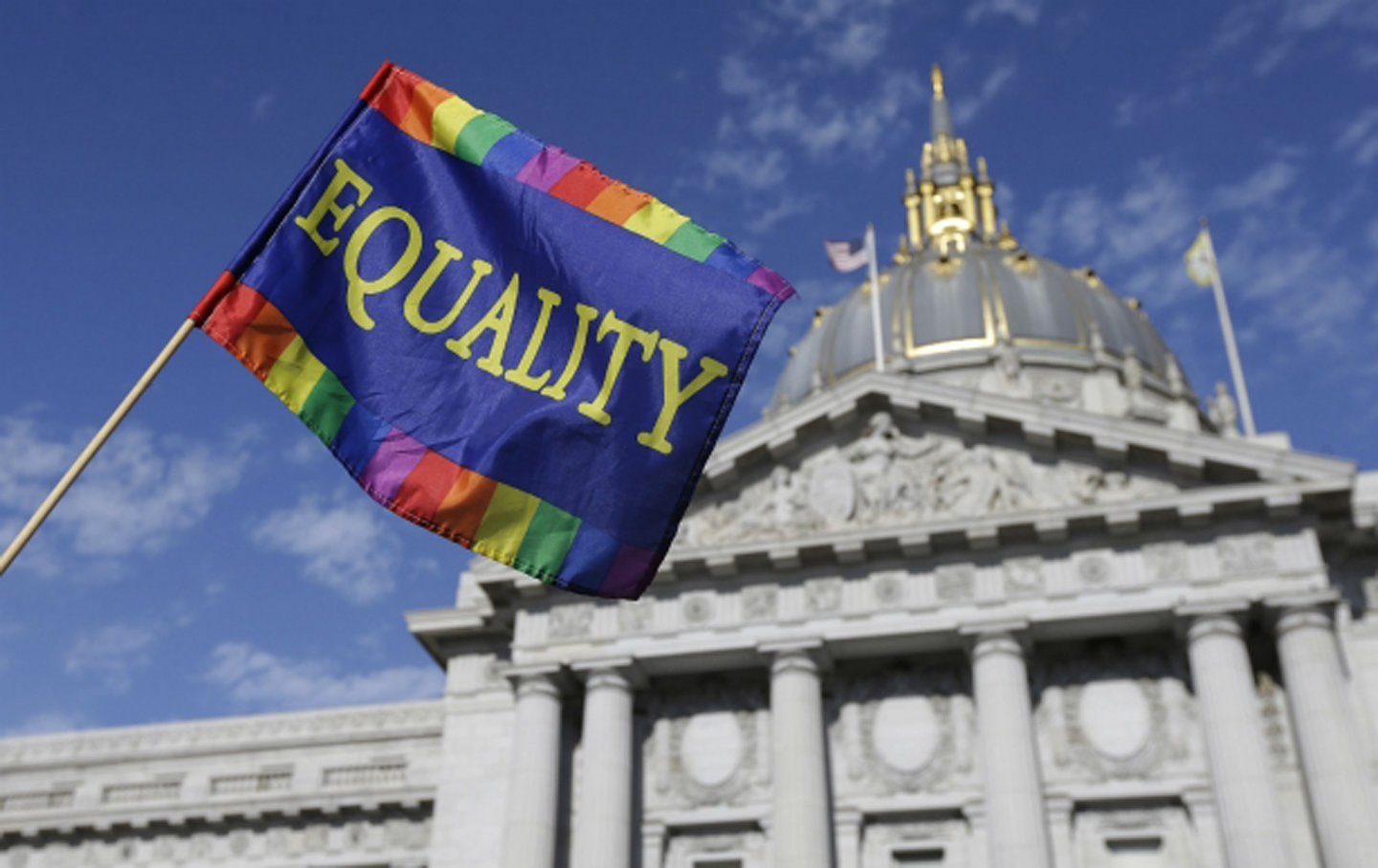 A flag raised outside City Hall in San Francisco, Friday, June 26, 2015, after the US Supreme Court ruled that same-sex couples have the right to marry nationwide (AP Photo/Jeff Chiu)

As a jubilant crowd at the Supreme Court celebrated Friday’s 5-4 ruling that same-sex couples have a right to marry, moans of impotent fury emanated from conservatives in and out of the Court. “The Supreme Court of the United States has descended from the disciplined legal reasoning of John Marshall and Joseph Story to the mystical aphorisms of the fortune cookie,” Justice Antonin Scalia fumed in his dissenting opinion. In his own dissent, Justice Clarence Thomas argued that the Court should not worry about human dignity: “Slaves did not lose their dignity (any more than they lost their humanity) because the government allowed them to be enslaved,” he wrote. Justice Samuel Alito, also dissenting, fretted that homophobes now “will risk being labeled as bigots.”

Among the field of Republican presidential candidates, the responses ranged from outrage to resignation; none embraced the ruling. Some were quick to throw red meat to the conservative base, ignoring yet another thing the GOP supposedly learned after getting crushed in 2012. But a few of the more serious candidates, who have read the polls and know that aggressive opposition to gay marriage spells trouble in a general election, tried to shift the focus to one of the next issues in the marriage debate, which Nan Hunter explores in detail here—the attempt to frame discrimination as the exercise of “religious liberty.”

Some candidates are already shifting their focus to frame discrimination as the exercise of “religious liberty.”

“This decision will pave the way for an all out assault against the religious freedom rights of Christians who disagree with this decision,” squawked Louisiana Governor Bobby Jindal, who recently issued an executive order designed to shield business owners who discriminate against same-sex couples. “The government should not force those who have sincerely held religious beliefs about marriage to participate in these ceremonies,” he argued in his statement.

Though his take was cautious, former Florida governor Jeb Bush also highlighted religious-freedom protections. “Guided by my faith, I believe in traditional marriage. I believe the Supreme Court should have allowed the states to make this decision,” Bush said. “In a country as diverse as ours, good people who have opposing views should be able to live side by side. It is now crucial that as a country we protect religious freedom and the right of conscience and also not discriminate.”

Florida Senator Marco Rubio was somewhat resigned. “I believe that marriage, as the key to strong family life, is the most important institution in our society and should be between one man and one woman.… While I disagree with this decision, we live in a republic and must abide by the law.”

But Wisconsin Governor Scott Walker urged opponents of gay marriage to keep fighting. “I believe this Supreme Court decision is a grave mistake,” he said. “As a result of this decision, the only alternative left for the American people is to support an amendment to the U.S. Constitution to reaffirm the ability of the states to continue to define marriage.”

Former Arkansas Governor Mike Huckabee and former Pennsylvania Senator Rick Santorum were predictably affronted. Huckabee declared that he would “not acquiesce to an imperial court any more than our Founders acquiesced to an imperial British monarch. We must resist and reject judicial tyranny, not retreat.” Santorum blasted the Court majority for “decid[ing] to redefine the foundational unit that binds together our society without public debate or input.”

And let’s not forget Donald Trump, who offered something truly incomprehensible:

Once again the Bush appointed Supreme Court Justice John Roberts has let us down. Jeb pushed him hard! Remember!

As with the Court’s decision upholding the Affordable Care Act, the ruling against gay-marriage bans is really a win for Republican candidates. They can use it to direct attention to the 2016 election, as Rubio, Walker, and former Texas governor Rick Perry did. “As we look ahead,” Rubio said, “it must be a priority of the next president to nominate judges and justices committed to applying the Constitution as written and originally understood.” Perry promised, “as president, I would appoint strict Constitutional conservatives who will apply the law as written.” And by taking the basic marriage question off the table, the Court offered candidates an exit from a debate they can’t win. As to who will actually take it—ask the nearest hippie.