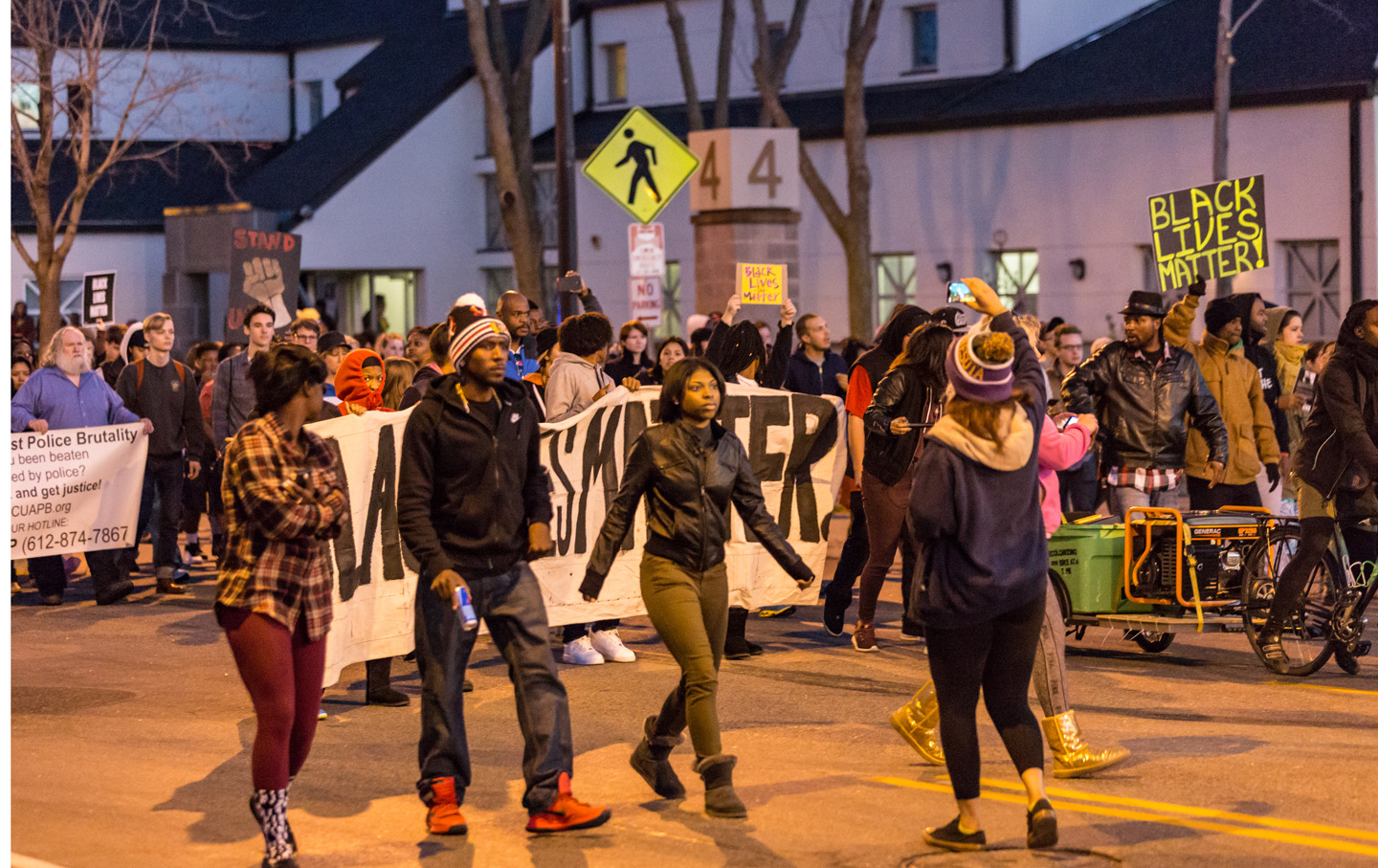 Last night, November 23, five people were shot while protesting at a police precinct in Minneapolis. The protests, which have lasted over a week, are in response to the police killing of 24-year-old Jamar Clark, who witnesses say was unarmed and handcuffed at the time of the shooting. Activists representing several different organizations, including Communities United Against Police Brutality, the NAACP, and Black Lives Matter have been camped out at the precinct and have been demanding the release of several videos—from the ambulance that was on scene, cell phone video from witnesses, and a public housing authority camera—that capture the shooting. These activists say that white supremacist groups have been out every night of the protest, threatening violence. On the night of the shooting, three men wearing masks and bulletproof vests were identified and removed from the protest area. The protesters believe these are the same men who opened fire and shot five people, none of whom are believed to have life-threatening injuries at this time. The shooters have not yet been identified.

This sort of violence, whether it’s done by the state or individual actors, is intended to frighten, to produce cowardice in the people fighting for answers in the death of yet another black person killed by the police. This is the kind of violence that is meant to remind black people of their place. It’s the defense of a racist status quo.

And it’s a natural reaction from those who seek to stem the current tide of change. The movement that has grown since the death of Trayvon Martin and accelerated after the death of Michael Brown is exerting great influence of the political landscape and threatens to produce real change. Every Democratic candidate for president has been challenged to present a comprehensive plan for reform of the justice system, the current president became the first ever to visit a federal prison, and student activists across the country are either forcing the ouster of college presidents or having their demands for institutional change taken seriously enough to have university administrators sign pledges. Even the nation’s top law enforcement officers are calling for reforms to mandatory minimum sentencing and a shift in drug laws.

Cracks are showing, but they can’t come without backlash. Any change in the system, no matter how minor, threatens to undo the foundation, and therefore the identity, of the country. The status quo produces its own defenders. And, as it appears now, those defenders opened fire in Minneapolis.

It has to be understood that this is not a fear that can be reasoned with. No amount of facts and logic will deter the defenders from doing their job. They will charge on regardless.

But no one who has put their body on the line in protest has done so without recognizing that the threat of death is imminent. Whether it comes from official state actors or vigilantes acting on behalf of white supremacy, violence is the ultimate tool of repression. Fighting for your life and rights is a dangerous occupation.

And the fight won’t stop. It’s frightening to think that a consequence of speaking out against injustice may be a bullet, but the cost of not speaking out is the continued slaughter. What the shooters wanted was for the protesters to cower in fear. What they are likely to find is that this only strengthens their resolve.