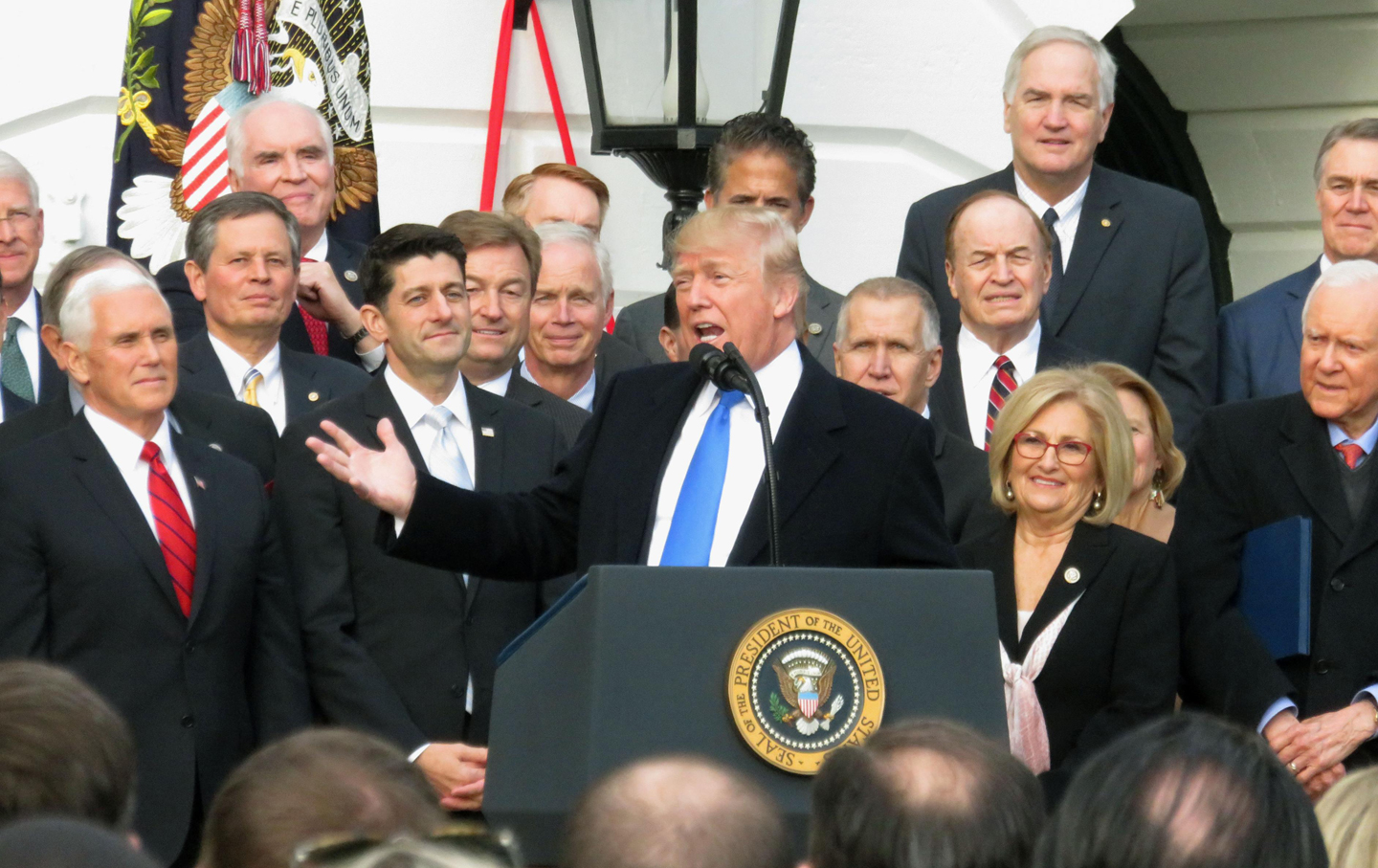 It just so happened that during the week that Republicans rammed a $1.5 trillion tax bill through Congress without a single Democratic vote, Philip Alston, the UN special rapporteur on extreme poverty and human rights, was finishing up a fact-finding mission to the United States. Alston visited places like Georgia, Alabama, and West Virginia, which voted for Donald Trump, but he also stopped in California, which went for Hillary Clinton, and Puerto Rico, which wasn’t allowed to vote for president at all. A veteran diplomat with tours in Afghanistan, Sri Lanka, and Albania, Alston was nonetheless shocked by what he saw here, in the richest country in the world. His devastating report described the conditions facing the one in eight Americans who live in poverty—rotting teeth, crushing debt, homelessness, hunger, drug addiction, untreated illness, and pollution. It also identified the political choices that keep poor Americans poor: neglect, discrimination, the criminalization of poverty, privatization, and the evisceration of the social safety net. “If you want to talk about the American dream, a child born into poverty has almost no chance of getting out of poverty in today’s United States, statistically,” he concluded.

The impact of the GOP tax plan on this already miserable state of affairs was not lost on the special rapporteur. “The proposed tax reform package stakes out America’s bid to become the most unequal society in the world,” he said. Or, as Thomas Piketty and his colleagues recently put it, the tax plan will “turbocharge inequality in America,” making it look “more and more like a rentier society.”

How the bill does this is relatively straightforward. It locks in permanent and steep tax cuts to corporations, down from 35 percent to 21 percent. It creates new exemptions in the estate tax and for pass-through corporations, which almost exclusively benefit the ultra-rich like the Trump family and Senator Bob Corker, both of whom own pass-through corporations. As a fig leaf, the bill temporarily reduces individual taxes for most, but by 2027 the richest 1 percent of Americans will see over 82 percent of its benefits. All told, this massive upward redistribution of wealth will add $1.5 trillion to the deficit, greasing the wheels for the cuts to Medicare and Social Security that Speaker Paul Ryan has already threatened.

How this monstrosity came to pass is a more complicated matter, one that could use a fact-finding mission or two of its own. By mid-December, less than a quarter of Americans supported the plan, and an overwhelming majority correctly observed that it was designed to help corporations and the rich, not the middle class. Not a single Democrat voted for the bill, including centrists up for reelection like North Dakota’s Heidi Heitkamp, West Virginia’s Joe Manchin, and Montana’s Jon Tester. Virtually every major newspaper in the country, as well as many leading economists, had editorialized against it. To overcome this wall of opposition, Republicans used special rules that evaded a filibuster, and they deep-sixed the town-hall meetings that protesters had earlier used to successfully rally in defense of Obamacare (although some activists managed to break through, like the courageous Ady Barkan, who suffers from ALS and who confronted Arizona’s Jeff Flake on a plane). 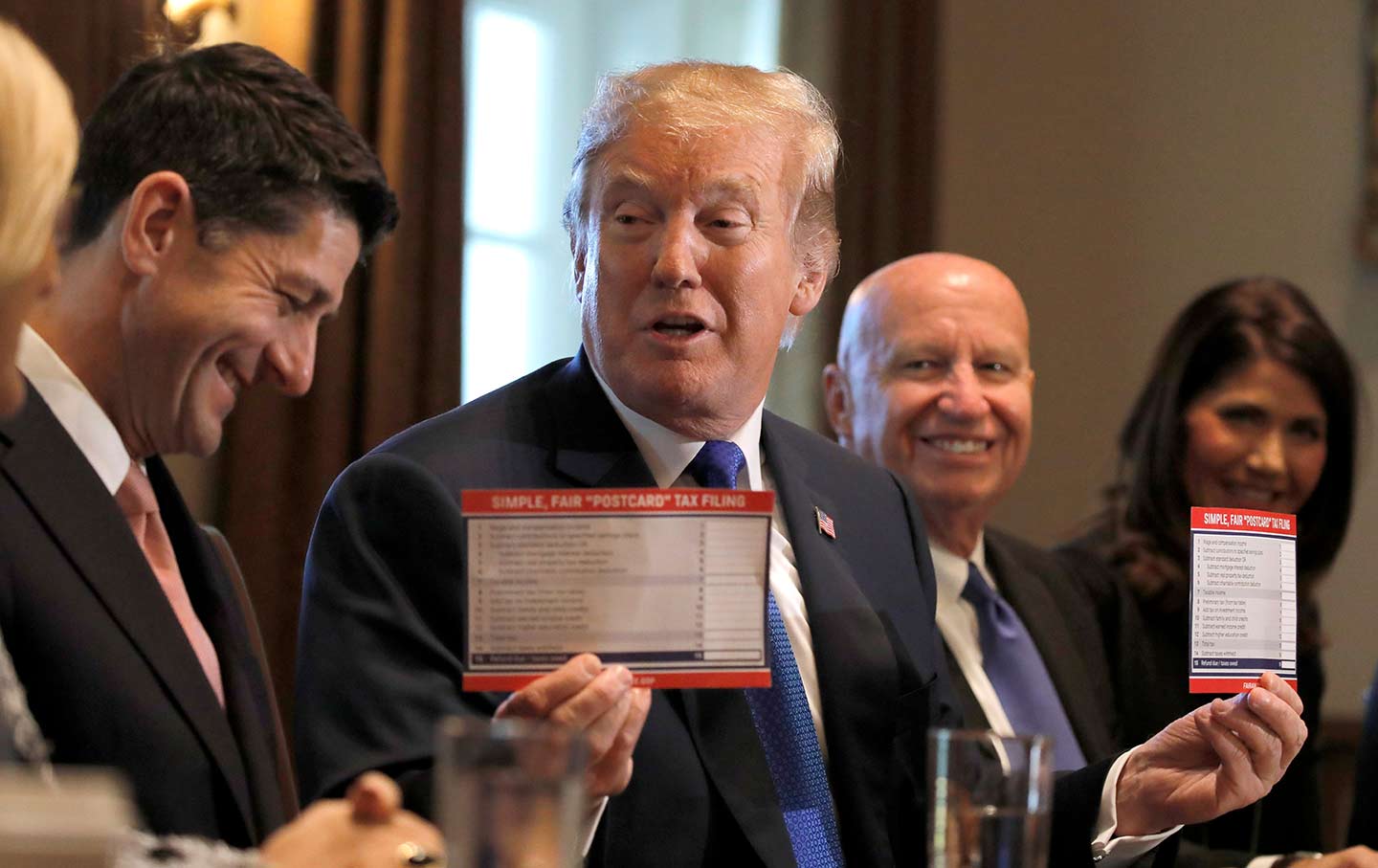 But this gamesmanship is just the tip of the anti-democratic bulwark that allowed the GOP to shove this transparently corrupt scheme through Congress. What the party-line vote revealed is that the Republican caucus is entirely insulated from the normal populist considerations that ought to prevail in a functioning democracy. They are captured by self-interest—whether personal, political, or both. If you were betting on Senator Lisa Murkowski to have a conscience, bet again. As Representative Chris Collins, who voted for the bill, put it, “My donors are basically saying, ‘Get it done or don’t ever call me again.’”

Throwing these enablers of oligarchy out of Congress is an obvious first step, but changing the rules that put them there in the first place is the longer game. That’s a frustrating conclusion, because it means a lot of hard and uncertain work in a terrain that is often as mind-numbing as tax law itself—the census, redistricting, voting rights, and campaign-finance reform. But this past week proved that there’s no way around it. For among the root causes of poverty in the United States identified by Alston was the withering of democracy itself. “The foundation stone of American society,” he wrote, “is being steadily undermined.” “The net result is that people living in poverty, minorities, and other disfavored groups are being systematically deprived of their voting rights…[and] some political elites have a strong self-interest in keeping people in poverty.”