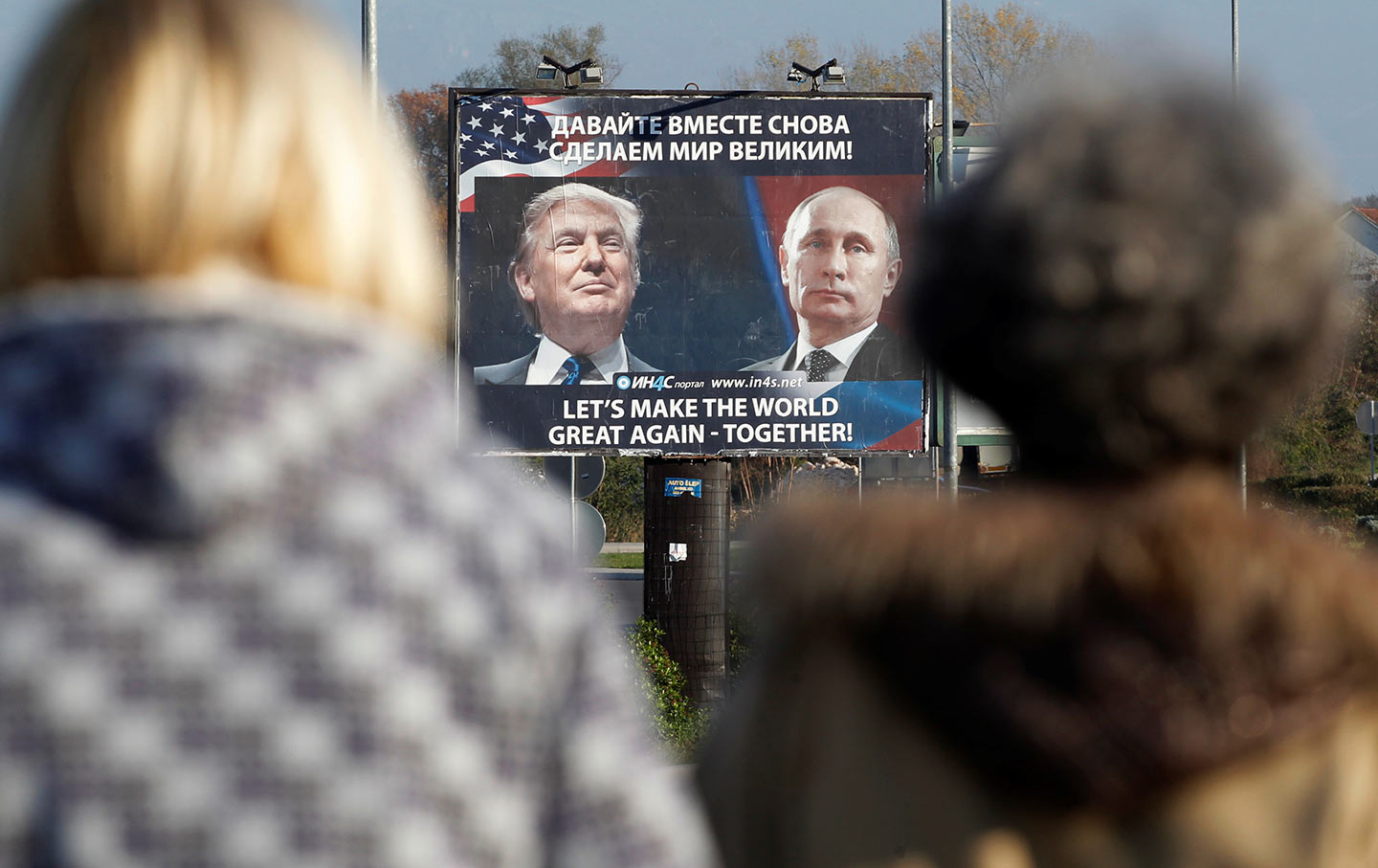 For decades, Russia’s self-described “liberals” and “democrats” have touted the American political system as one their country should emulate. They have had abundant encouragement in this aspiration over the years from legions of American crusaders, who in the 1990s launched a large-scale, deeply intrusive, and ill-destined campaign to transform post-Communist Russia into a replica of American “democratic capitalism.” (See my book Failed Crusade: America and the Tragedy of Post-Communist Russia.) Some Russian liberals even favored NATO’s eastward expansion when it began in the late 1990s on the grounds that it would bring democratic values closer to Russia and protect their own political fortunes at home.

Their many opponents on Russia’s political spectrum, self-described “patriotic nationalists,” have insisted that the country must look instead to its own historical traditions for its future development and, still more, that American democracy was not a system to be so uncritically emulated. Not infrequently, they characterize Russia’s democrats as “fifth columnists” whose primary loyalties are to the West, not their own country. Understandably, it is a highly fraught political debate and both sides have supporters in high places, from the Kremlin and other government offices to military and security agencies, as well as devout media outlets.

In this regard, Russiagate allegations in the United States, which have grown from vague suspicions of Russian “meddling” in the 2016 presidential election to flat assertions that Putin’s Kremlin put Donald Trump in the White House, have seriously undermined Russian democrats and bolstered the arguments of their “patriotic” opponents. Americans, who may have been misled by their own media into thinking that Russia today is a heavily censored “autocracy” in which all information is controlled by the Kremlin, may be surprised to learn that many Russians, especially among the educated classes but not only, are well-informed about the Russiagate story and follow it with great interest. They get reasonably reliable information from Russian news broadcasts and TV talk shows; from direct cable and satellite access to Western broadcasts, including CNN; from translation sites that daily render scores of Western print news reports and commentaries into Russian (inosmi.ru being the most voluminous); and from the largely uncensored Internet.

How many Russians believe that the Kremlin actually put Trump in the White House is less clear. Widespread skepticism is often expressed sardonically: “If Putin can put his man in the White House, why can’t he put a mayor in my town who will have the garbage picked up?” Others, who believe the allegation, often take some pleasure, or schadenfreude, from it, having grown resentful of US “meddling” in Russian political life for so many years. (In recent history, the remembered example is the Clinton administration’s very substantial efforts on behalf of President Boris Yeltsin’s reelection in 1996.)

But what should interest us is how Russiagate allegations have tarnished America’s democratic reputation in Russia and thereby undermined the pro-American arguments of Russia’s liberal democrats, who were never a very potent political or electoral force and whose fortunes have already declined in recent years. Consider the following:

§ Russian democrats argue that their country’s elections are manipulated and unfair, including, but not only, those that put and kept Vladimir Putin in the Kremlin. “Patriotic nationalists” now reply that Russiagate rests on the allegation, widely reported and believed in the United States, that an American presidential election was successfully manipulated on behalf of the desired candidate and that the entire US electoral system may be vulnerable to manipulation.

§ Russian democrats protest that oligarchic and other money has corrupted Russian politics. Their opponents argue that special counsel Robert Mueller’s convictions and other indictments—in the cases of Paul Manafort and Michael Cohen, for example—prove that American political life is no less corrupt financially.

§ Going back to Soviet times and continuing today, a major complaint of Russian democrats has been the shadowy, malevolent role played by intelligence agencies, particularly the KGB and its successor organization. Patriotic nationalists point to disclosures that their US institutional counterparts, the CIA and FBI, played a secretive and major role in the origins of Russiagate allegations against Trump as a presidential candidate and since his inauguration.

§ Russian democratic dissidents have long protested, and been stifled by, varying degrees of official censorship. Their Russian opponents argue that campaigns now underway in the United States against “Russian disinformation” in the media are a form of American censorship.

§ Many Russians distrust their media, particularly “mainstream” state media. Their opponents retort that American mainstream media is no better, having undertaken a kind of “war” against President Trump and along the way having had to retract dozens of widely circulated stories. In this connection, we may wonder what Russian skeptics made of an astonishingly revealing statement by the media critic of The New York Times—an authoritative newspaper in Russia as well—on January 21 that the “ultimate prize” for leading American journalists is having “helped bring down a president.” By now, Americans may not be shocked by such a repudiation by the Times of its own professed mission and standards, but for Russian journalists, who have long looked to the paper as a model, the reaction was likely profound disillusionment.

§ Putin’s Russian democratic critics often protest his “imperial” foreign policies, so imagine how they interpreted this imperial statement by Washington Post columnist Richard Cohen on January 15: “Nations, like children, crave predictability. They need to know the rules. The United States is like a parent. Other countries look to it for guidance and to enforce the rules. Trump has utterly failed in that regard.” Any Russian with a medium-range memory is unlikely to miss this echo of the Soviet Union’s attitude toward the “children” it ruled. And yet, a columnist for The Washington Post—also an authoritative newspaper in Russia—emphasizes Trump’s failure to “enforce the [imperial] rules” as a Russiagate indictment.

§ Perhaps most Russians who are informed about Russiagate believe that all the various allegations against Trump are actually motivated by US elite opposition to his campaign promise to “cooperate with Russia.” This means, as Russia’s “patriotic nationalists” have always argued, that Washington will never accept Russia as an equal great power in world affairs, no matter who rules Russia or how (whether Communist or anti-Communist, as is Putin). To this, Russia’s liberal democrats have yet to find a compelling answer.

One Russian, however, who personifies biographically both that system’s recent democratic experiences and its nationalist traditions, has had a mostly unambiguous reaction to Russiagate. Despite US mainstream-media claims that Russian President Putin is “happy” with the “destabilization and chaos” caused by Russiagate in the United States, such consequences are incompatible with what has been Putin’s historical mission since coming to power almost 20 years ago: to rebuild Russia socially and economically after its post-Soviet collapse in the 1990s, and to achieve this through modernizing partnerships with democratic nations—from Europe to the United States—in a stable international environment. For this reason, Putin himself is unlikely to have plotted Russiagate or to have taken any real satisfaction from its woeful consequences.

Which leaves us with an as-yet-unanswerable question. Eventually, Trump and Putin will leave office. But the consequences of Russiagate, both in America and in Russia, will not depart with them. What will be the subsequent, longer-term consequences for both countries and for relations between them? From today’s perspective, nothing good.

Stephen F. Cohen’s book War with Russia? From Putin and Ukraine to Trump and Russiagate has just been published. This commentary is based on his most recent weekly discussion with the host of The John Batchelor Show. Now in their fifth year, previous commentaries are at TheNation.com.