As the votes rolled in, one thing became increasingly clear. Hillary Clinton won the presidential election by a nearly 3 million vote margin, but lost the Electoral College by 74 votes—the greatest discrepancy between the popular and electoral votes in American history. The result spawned an uproar. “The election was rigged” and it’s time to get rid of it, the Los Angeles Times exclaimed. Before leaving the Senate, Barbara Boxer of California even introduced legislation that would replace the Electoral College with a popular-vote system.1

But despite the opprobrium aimed at it, the Electoral College remains little understood. Here’s a quick rundown: The number of Electoral College votes each state has is equal to the number of senators and representatives it sends to Congress. Each state is guaranteed two senators and one representative, so each state gets at least three electoral votes. Because of the 23rd Amendment, our nation’s capital also gets at least three electoral votes.2

Every 10 years, the Census Bureau counts the population in every state and applies a convoluted formula to determine the number of representatives (and therefore the number of electoral votes) each state will receive.3

Because small states get three electoral votes regardless of their population, and because the Bureau’s formula prioritizes giving new electoral votes to smaller states, this system creates a predictable bias in favor of small states. And this small-state bias has grown astronomically over time. In 1804, the first presidential election after a census-based reapportionment, the most over-represented state (Ohio) was 90 percent better represented than it would have been if electoral votes were tied perfectly to state populations. In 2015, the most over-represented state (Wyoming) was 306 percent better represented than it would be under a proportionate system.1 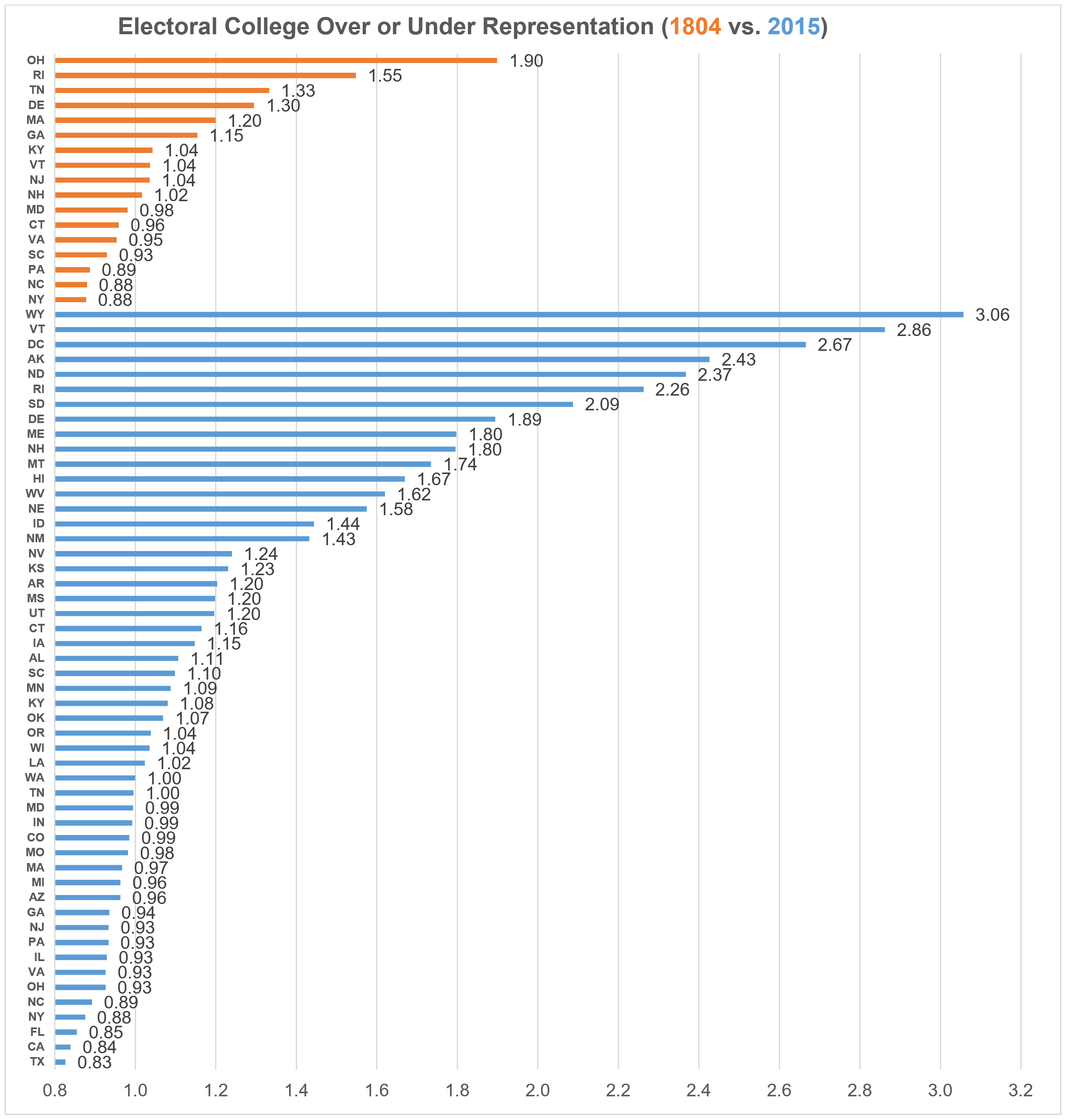 Not a single state was two times over-represented in 1804. Today, six states and DC get at least two times more electoral votes than they would under an equal-population system, while Texas and California each get 15 percent fewer electoral votes. In 1804, no state was under-represented to that extent. It is hard to imagine that the Framers anticipated the huge disparities in representation the Electoral College currently produces.6

But it’s not just that certain states are over-represented. Specific segments of the population get to wield far more power under the Electoral College than they would otherwise. States identified as Republican strongholds, for example, are more over-represented, on average, than states of any other partisan bent.7 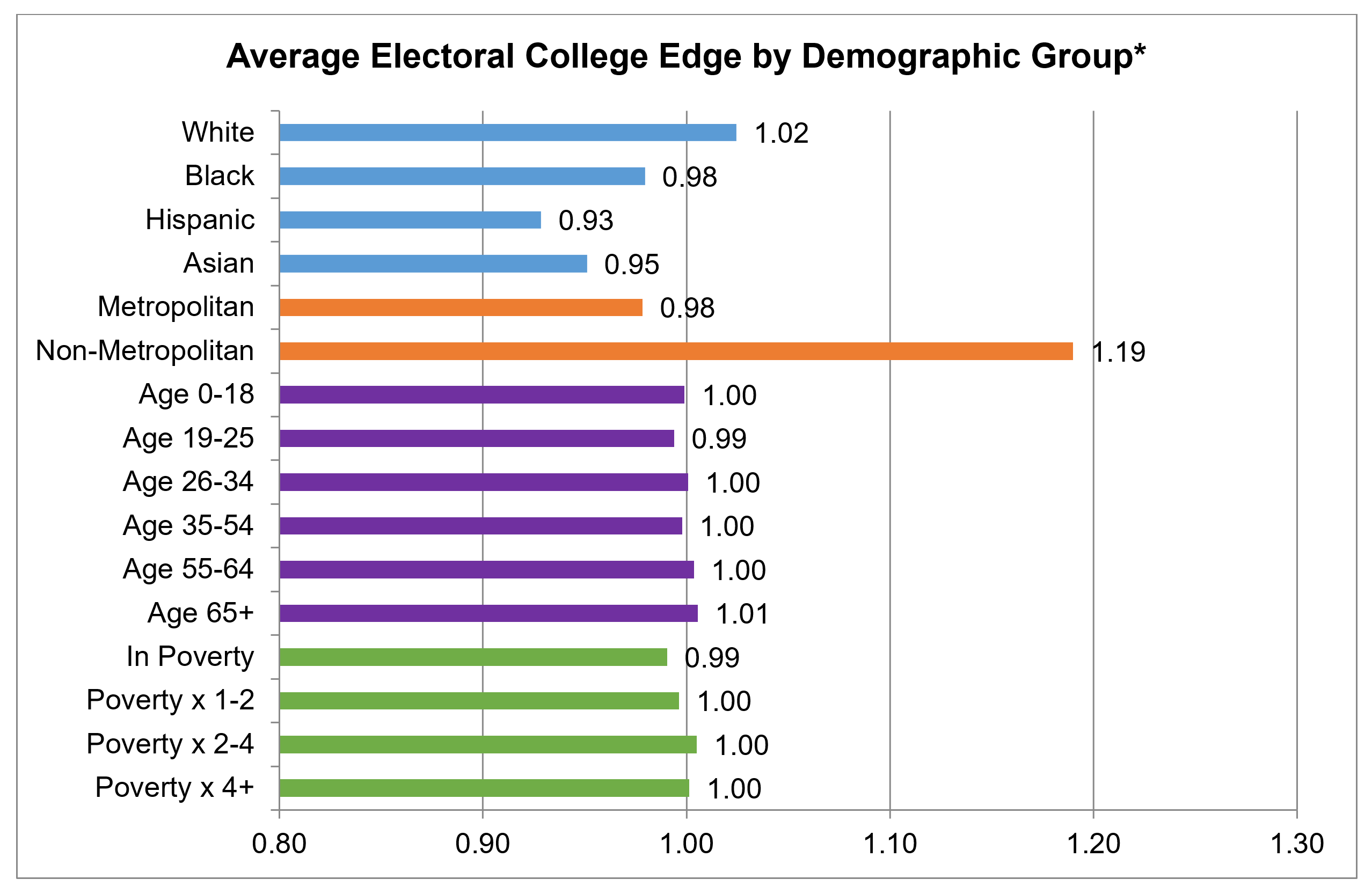 * Green bars represent the Electoral College Edge experienced by individuals at varying income levels. For example “Poverty x 1-2” refers to voters whose incomes are between 1-2 times the federal poverty threshold.

Despite the changing demographics in the country as a whole, the under-representation of Hispanic people in the Electoral College is likely to endure. Applying the same methodology to population projections by the Urban Institute suggests that in 2030, 22 percent of the population will be Hispanic, and they will be 7 percent underrepresented.13

But there’s a catch. To achieve this Framer’s-era distribution without removing electoral votes from any state, we would have to give many states a lot of additional electoral votes—about 45 to California, 32 to Texas, 23 to Florida, and about 200 combined to other states in inverse proportion to their current disadvantage. Obviously, a sudden addition of 45 Representatives in any one state might be contentious, but we can take incremental steps to approach the Framer’s era distribution of Electoral College representation by making a sizeable increase in the number of representatives and electors in the next election. As radical a solution as it may seem, drastically expanding the size of Congress may be the only way to ameliorate the bias embedded in the Electoral College.18

Democrats keep losing the Electoral College while winning ever-larger popular-vote victories because their support is overly concentrated in under-represented states like California and New York. Clinton won California by over 3 million votes, netting 55 electoral votes. Trump’s combined popular vote margin in Pennsylvania, Florida, Michigan, and Wisconsin was under 250,000, but those victories netted him 75 electoral votes.20

Moving forward, Democrats should seek to ensure they not only secure huge victories in very progressive and populous states, but also invest time and resources in securing victories in states where votes are likely to impact the outcome of the election. But which states are those?21

Because elections are decided by a vastly different number of voters in different states, and because states have very different numbers of electoral votes, voters in some states are far more likely to impact the outcome in the Electoral College. A voter in a state with a large spread between the two major candidates and/or a small number of electoral votes would have a small likelihood of affecting the election. Think of Washington, DC—an extremely partisan city with a measly 3 electoral votes. Casting your ballot there, for either party, is unlikely to influence the outcome of the presidential election. In contrast, a voter in a state with a small spread between the two candidates and/or a lot of electoral votes can make a difference. Think of Florida, where elections have been decided by a tiny number of voters, but the state provides a whopping 29 electoral votes. Casting a vote in Florida is more likely to swing how the state apportions its huge prize, which in turn is more likely to impact the outcome of the election.22

Combining these two factors (major candidate margin and electoral votes), in 2016, voters in New Hampshire and Michigan had the biggest likelihood of influencing the election.23 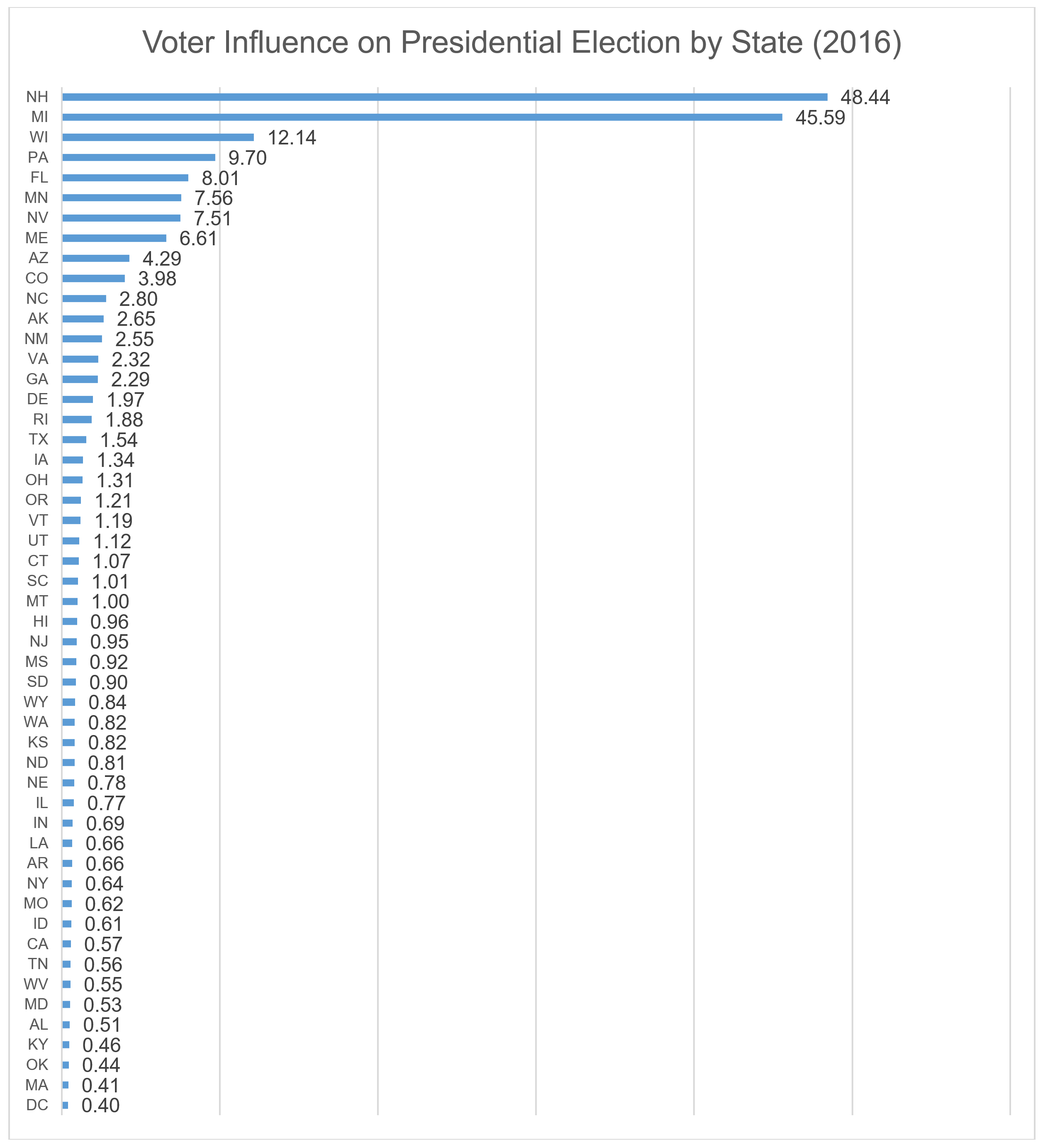 The data used to create the chart above were collected from CNN.com on November 20th, 2016 and therefore may under-represent the power of a vote in certain states, like Michigan, Wisconsin, and Pennsylvania, where votes counted in the latter third of November suggested even closer election outcomes.

Not surprisingly, the top five states where a vote can make a difference are also typical swing states, and the bottom five are stable Democratic or Republican states. What is surprising is the huge range of how valuable a vote in a given state can be. A vote in New Hampshire is over 120 times more valuable than a vote in DC. While this might seem counterintuitive given that both places have three electoral votes, recall that George W. Bush won by two votes. Moreover, the tiny margin between Trump and Clinton in 2016 meant that a voter in New Hampshire was a lot more likely than a voter almost anywhere else to help their candidate of choice secure any points where it counts.25

Moving beyond the top five most influential states, many non-swing-states made the top twenty. A vote in Minnesota mattered 7.5 times more than a vote in the average state, and a vote in Alaska, New Mexico, Delaware, Rhode Island, and Texas (yes, Texas) mattered anywhere from 1.5 to 2.65 times more. Votes in all of these states mattered more than votes in Ohio and Iowa, two typical swing states.26

First, campaign strategically in states where a vote is more likely to affect the outcome in the Electoral College. While many of these states are swing states, and swing states certainly receive a great deal of attention and ad revenue, there are votes yet to be had in each of the strategic states mentioned above. Even Minnesota, which had the highest turnout rate in 2016, still only saw 75 percent of its eligible voters cast ballots. That leaves a quarter of the electorate. And the average state is far less engaged. Sixty percent of eligible voters nationwide participated in the 2016 election.30

Second, overturn or repeal voter identification laws in those key states. Voter identification laws are having a clear impact in key states. They are in effect in New Hampshire, Michigan, Wisconsin, and Florida—four of the top five states with an impact on the Electoral College. And a federal court found that voter identification laws in Wisconsin could be keeping 300,000 voters (or 9 percent of the state’s electorate) from voting, and that these 300,000 voters are more likely to be poor, Latino, and Black. Current data suggests that Trump won Wisconsin by fewer than 23,000 votes. Aggressively taking on these laws is not only a strategic means of providing Democrats with a potential pathway to victory in 2020. It is also a moral imperative for those hoping to remove at least one threat to the franchise experienced by groups that are already partially disenfranchised by the bias in the Electoral College (among other threats to their right to vote).31

How the Electoral College Really Started

We Need to Kill the Electoral College

Finally, minimize the negative impacts of voter registration purges in key states. Both NBC and Rolling Stone have reported that such purges—allegedly designed to ensure individuals are not registered to vote in multiple states or are not registered if they are non-citizens—have a disproportionate, negative effect on the franchise of Black, Hispanic, and Asian voters. This is largely because those populations use fewer surnames and thus are more vulnerable to false-positive identification. Mark Swedlund found that these disproportionate purges are happening in Virginia and Georgia—two of the top 15 states where a vote is likely to impact the outcome in the Electoral College. Ensuring adequate safeguards against hasty purges in these key states will also safeguard the franchise for vulnerable groups while helping Democratic candidates benefit from every legitimate ballot cast in states more likely to impact the outcome in the Electoral College.32

The Founding Fathers envisioned a democracy where all voters could help determine the destiny of the country through free and fair elections. As bias in the Electoral College grows and obstacles to the franchise persist, our nation’s democratic promise fades. To rekindle this promise, and revive fading faith in our democratic institutions, we must restore a semblance of balance to the Electoral College and overcome the laws and practices that are subverting the voices of millions.34