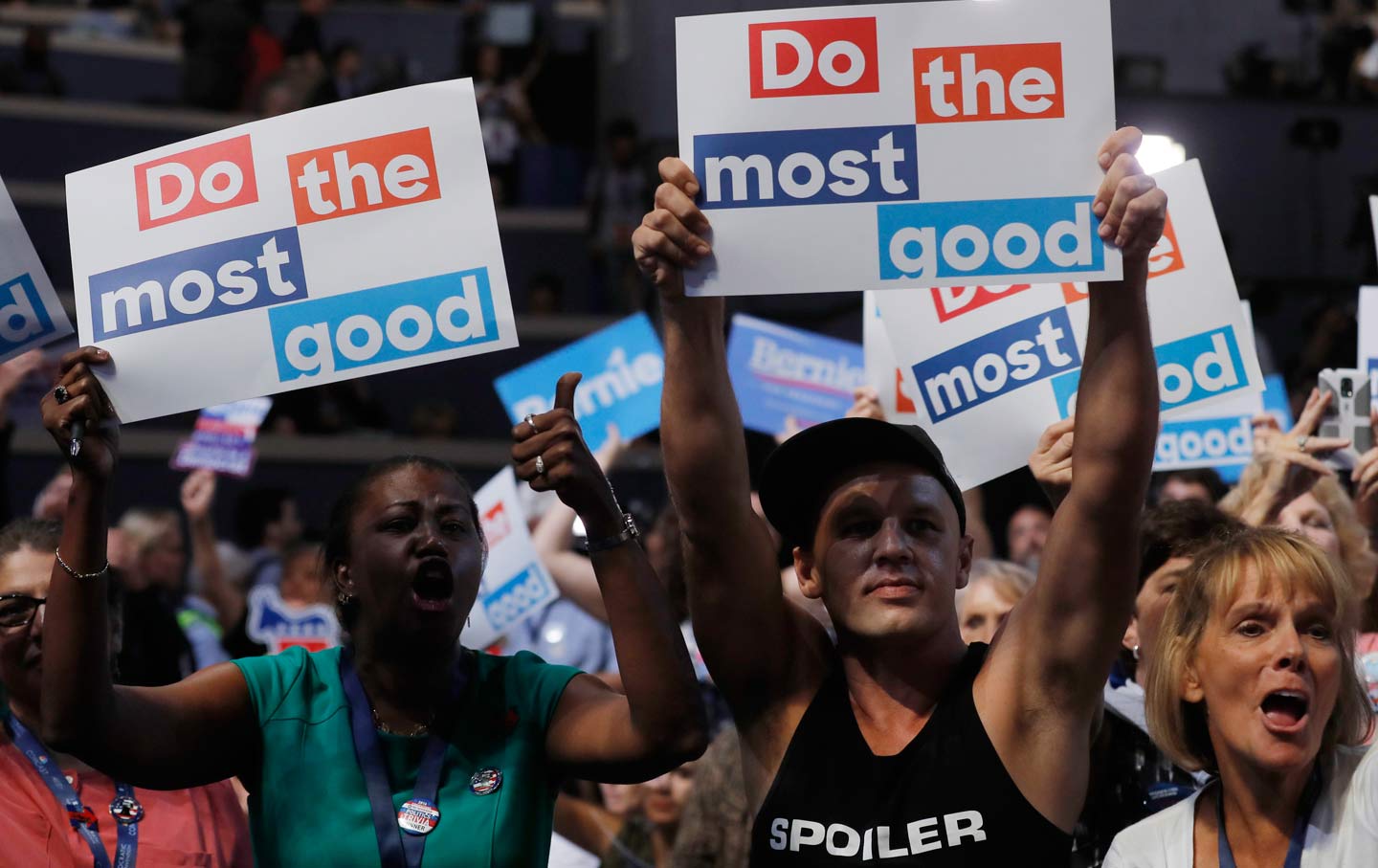 Going into the next few days, here’s a meditation for Hillary Clinton and Bernie Sanders voters alike: Please take 10 minutes to ponder the difference between electoral politics and movement politics. On the convention floor in Philadelphia they’re being conflated, by both sides in the Democratic family argument and by too many reporters.

Begin with FDR’s famous maxim: “OK, you’ve convinced me. Now go out and put pressure on me.” What FDR understood: Elected officials, even the best and most principled, operate within the parameters of possibility that they discern in their constituency. In that sense, elected officials—and American presidents most of all—are the end of the political digestive system. Electoral politics is usually the last place change gets felt. Even a sympathetic, justice-minded president is only likely to speed reform when backed by a powerful grassroots campaign, as Lyndon Johnson did with the Civil Rights Act and Barack Obama did with marriage equality.

And a reactionary president can halt or reverse decades of progress if there’s a gutted vacuum where a vital movement used to be, as Ronald Reagan understood better than anyone.

Movement politics, on the other hand, is about reshaping and redefining those parameters. Moving the goalposts. It’s not only cynicism that has moved Hillary Rodham Clinton to oppose the Trans-Pacific Partnership, and embrace a vice-presidential candidate who is far to the left of the Bill Clinton legacy on most issues. It’s her awareness—too slow to dawn, perhaps, but awareness nonetheless—that after a generation of free-trade bills and Wall Street deregulation and prison expansion, the terms of debate have changed. Thank you, Bernie.

When Bernie Sanders says the revolution continues, this is what he means. His campaign—movement politics in the guise of a primary run—has changed the terms of debate, and done so with more success than many of us who voted for him expected. Look—the previous high-water mark for a socialist in American politics was Eugene V. Debs, winning 1 million votes from jail during World War I. Sanders has won 12 million. That is historic. And the argument Sanders pushed—both within the Democratic Party and beyond it—does not end tonight or on Election Day.

But listen up, fellow Bernie voters: What happens in the next 102 days is electoral politics—messy, inevitably hindered by compromise and ugly alliances. It is also essential, and has everything to do with whether the exciting shifts of recent months will continue, or turn—as they did after Reagan’s victory in 1980—into constant, defensive rearguard actions to protect a diminishing list of civil-rights gains of the past rather than further advance social justice. By the same token, conventional Democrats ought to go out and spend 10 bucks on “Thank You, Bernie” T-shirts and lawn signs. He’s allowed the Democratic Party to actually have an argument about ideas, and restored luster to the party’s once-embattled social-justice wing. (As Joe Biden said yesterday, “Bernie did more to change the party than the party did to change him.”)

You can believe, as I do, that HRC is a deeply unreliable ally. All that means is that it is the job of movement politics, as it always is, to keep the electoral politicians on track, to keep pushing the ideas and strategies which alone can invigorate American politics long after the votes are counted on November 8.