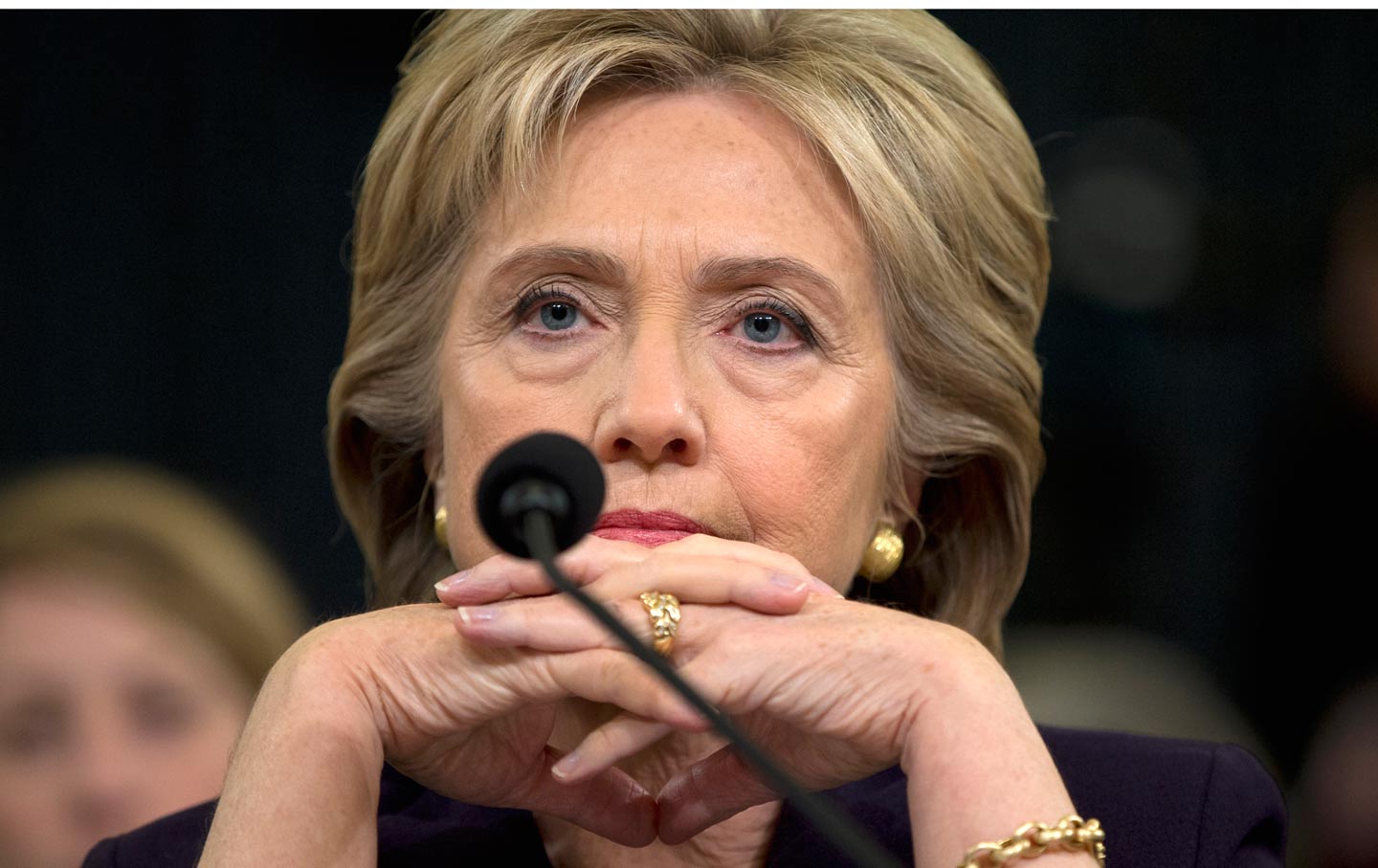 Three hours into the Select Committee on Benghazi hearing Thursday, Chairman Trey Gowdy, rocking a subdued fauxhawk, grew red with anger and slick with sweat. His GOP colleague Representative Susan Brooks, who’d printed out hundreds of pages of Clinton’s e-mail, and kept the stacks handy, stroking them occasionally, really should have offered some of that paper to Gowdy, so he could wipe himself down. The sports fan in me recognized the need for a time-out, and maybe some Gatorade, but no one else did.

It sounded like Clinton was supposed to be the mom-in-chief, not the Secretary of State.

The temperature rose as ranking committee Democrat Elijah Cummings objected to Gowdy’s trolling about the non-issue of Clinton-friend Sidney Blumenthal’s e-mail. Before the lunch break, Cummings and other Democrats moved to make Blumenthal’s committee testimony public, to show just how far afield of its charge to investigate the causes of the Benghazi compound attack Gowdy’s work had strayed.

But Gowdy objected, strenuously, and a little ominously. With a Draco Malfoy flourish, he closed the first half of the hearing: “I’ll tell you what, if you think you’ve heard about Sidney Blumenthal so far, wait until the next round!”

And with that, Gowdy’s credibility, if any still existed, was gone for good. It was Gowdy Doody time, and it stunk.

Fast forward to the end of Clinton’s 11-hour ordeal, and Gowdy’s own verdict on the charade didn’t much help his cause. He didn’t have an answer when reporters asked what he’d learned from Clinton’s calm, detailed, occasionally passionate testimony. “In terms of her testimony, I don’t know that she testified that much differently today than she has the previous times she’s testified,” Gowdy told a brief press conference. “So I’d have to go back and look at the transcript.”

When he does, he’ll find a few real accomplishments.

Gowdy and friends indicted Clinton for receiving gossipy e-mails from an old friend, Blumenthal, some of which were rude about her boss, President Obama, and others in his administration.

They indicted her for being polite to that same friend, sometimes, recklessly, encouraging him to keep in touch.

They indicted Clinton for having a press secretary who cared about the press she received.

Otherwise, they didn’t leave a mark. It was a festival of mansplaining, with Representative Jim Jordan the angriest and Representative Bill Pompeo the most condescending. But it must be said: Female committee members Susan Brooks and Martha Roby got their licks in. Brooks made much of Clinton’s not being sure when she’d last talked to Stevens, though she supervised something like 275 ambassadors. She didn’t like the fact that the secretary went home to work on the night of September 11, though CIA director David Petraeus did too. Brooks asked for the name of every staffer who stayed behind when Clinton went home, as though she’d left little children alone and vulnerable.

Roby picked up the gendered questioning when she asked whether and when Clinton had met personally with all of the Benghazi victims. I expected her to ask whether she’d hugged them, or whether she’d cried, or made them a home-cooked meal. It sounded like Clinton was supposed to be the mom-in-chief, not the secretary of state.

Overall, Gowdy created a Bizarro-world picture of Clinton’s work at State. Everyone knows his partisan committee got a big assist in credibility and purpose when it was discovered Clinton had used a private e-mail server for her non-classified communication during her time as secretary. It wasn’t against the law, or even State guidelines, but it still felt like bad judgment, and the mainstream media can’t get over it, turning to Gowdy for “leaks” that never add up to what he says they do over these last few months.

In Hillaryland as depicted by Gowdyworld, the only work that mattered was that done by email.

In the end, Gowdy’s e-mail political bonanza became a case of be careful what you wish for. Yes, the chairman got some credibility, for a time. But he then proceeded to funnel most of his depictions of Clinton wrongdoing through the filter of e-mail—and it created a very distorted picture of the way the State Department works—or anyone else.

In Hillaryland as depicted by Gowdyworld, the only work that mattered was that done by e-mail. People don’t meet, talk by phone, exchange classified cables, get briefed by aides, have conference calls or in-person meetings, or lunch or breakfast or dinner together. Their e-mail accounts, we’re supposed to believe, are their most tangible and important work product. So early on, Representative Susan Brooks, a former US attorney who knows better, produced a big pile of Clinton e-mail print-outs, alongside a little pile. The big one represented Clinton’s 2011 e-mail on Libya; the smaller pile her 2012 Libya oeuvre.

This was to suggest Clinton ignored security and other issues in Libya in the year of Chris Stevens’s death. Brooks stroked both e-mail piles lovingly; she seemed a little deranged by her props. Clinton calmly made clear the myriad of ways she communicated with the wider world, and Stevens, about the Libya challenge, seeming bemused by Brooks’s big e-mail stash. The moment, like so many others, eventually passed into nothingness.

Likewise, the sheer number of e-mails from Blumenthal, an old friend, but not an official adviser, counted all out of proportion to their meaning at the hearing. Allow me a moment of personal privilege: I worked with Sidney at Salon in 2004, when he was Washington bureau chief. Before or since, I have never had a more prolific e-mail correspondent. He’s indefatigable. I couldn’t and didn’t keep up. The committee expressed shock that Clinton didn’t seem to remember every Blumenthal e-mail message; it made total sense to me. There’s not enough time in the day to read everything Sid, a loyal friend, will send you if you’re in his orbit.

But the committee mentioned Blumenthal 82 times, according to the Washington Post transcript. And the fact that he had Clinton’s e-mail address, and Chris Stevens didn’t, counted as a big reveal on Thursday.

Right-wing commentators began throwing in the towel, and throwing tomatoes at Gowdy and Co., mid-afternoon. “Unless something happens, it’s starting to look like Hillary Clinton won’t merely survive this hearing—she will have come out on top,” The Week’s Matt Lewis tweeted. The New York Post’s John Podhoretz followed: “Why doesn’t Pompeo just go over and swear her in for president now—if he goes on like this he’ll practically get her elected.” Byron York’s Washington Examiner post was headlined “Benghazi bust.”

And so Clinton’s excellent October continued: After she aced last week’s debate (on style and substance if not ideology), she’s seen Vice President Joe Biden finally announce he won’t run, after Jim Webb gave up his cranky, long-shot bid. On Friday morning, Lincoln Chaffee, too, dropped out of the race. Let me channel the Beltway media, which never see anything as a positive for Clinton, and suggest it’s not to her advantage if the race gets dull and her nomination becomes inevitable. We’ll have to count on Senator Bernie Sanders to make sure that doesn’t happen.

But one thing is certain: She’s put the Benghazi Select Committee behind her. “I’ve lost more sleep than all of you put together,” she told the panel about her anguish over the compound attack. I’m sure she got more sleep than Trey Gowdy Thursday night. And she deserved it.