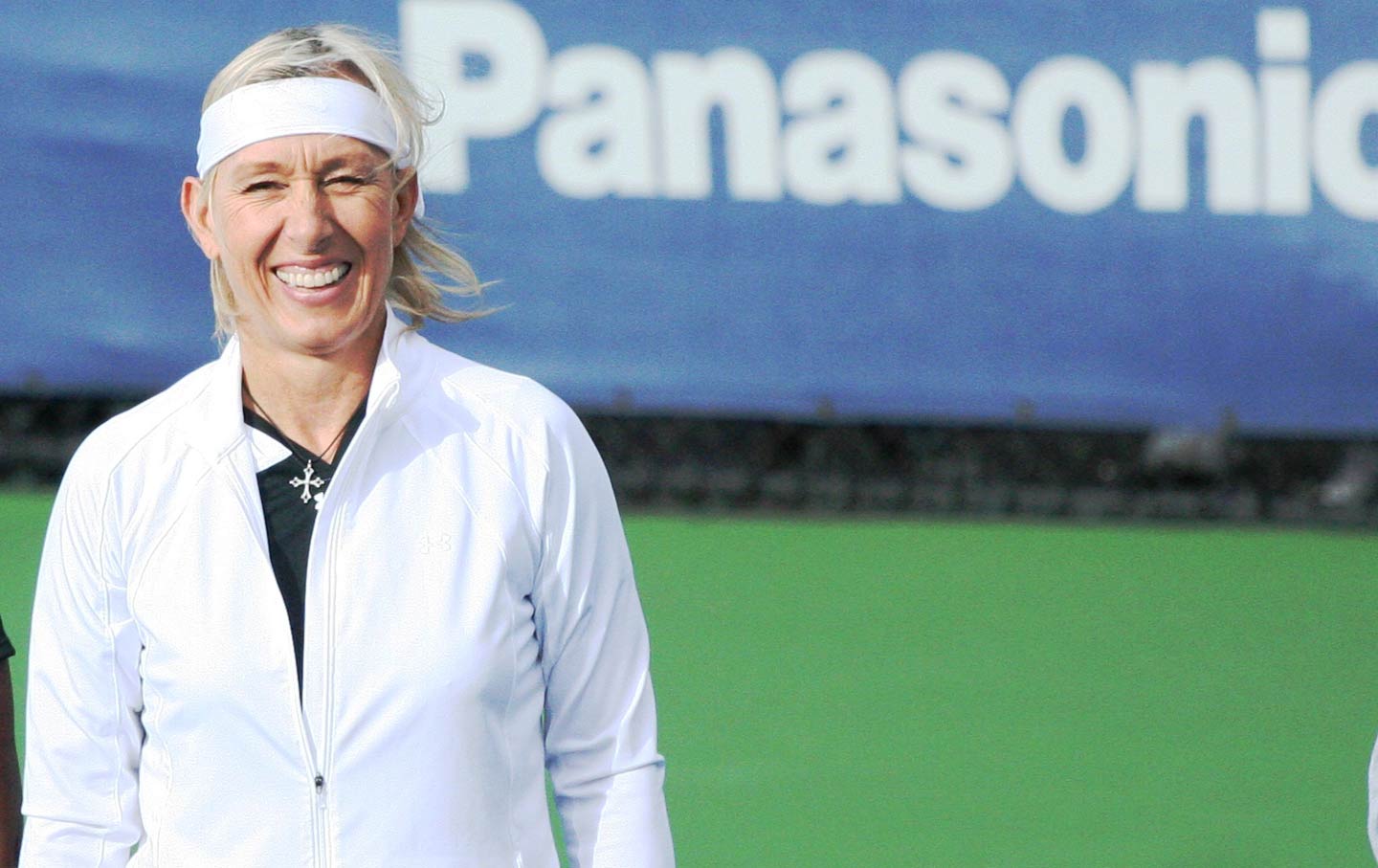 Martina Navratilova changed the political and personal trajectory of my life. Last week I was able to speak with her about the impact so many of us felt every time she took the court. What I failed to do was say “thank you,” and the following is an effort to remedy that oversight.

Martina, of course, is best known as a tennis legend: someone who, over a five-year stretch in the 1980s, won an astonishing 98 percent of her matches. She also connected with me through a TV screen and challenged some of the worst, most retrograde ideas floating around my pubescent head.

Growing up in New York City in the 1980s was not an experience one would describe as cloistered. Homeless vets, the crack epidemic, this middle-aged billionaire with orange hair and a yoooge ego trying to buy and pave over Central Park, and the police killings of Michael Stewart and Eleanor Bumpurs shattered any illusions I had of good governance, philanthropic one-percenters, and Officer Friendly. But I was also swimming in a soup of sexism and homophobia, as the backlash against the 1960s was in full swing. Those bigoted ideas could have felt as natural as eating pizza after school, but the great challenge to my acceptance that women and LGBT people were somehow inferior was the existence of Martina Navratilova. Just to see her walk into the court, all ropy, veined muscles and power as her partner at the time, Judy Nelson, sat in the family section was seismic for my own personal development.

For so long I’ve wanted to ask her just how politically conscious all of that was: her appearance, her training, and the open, as well as proud, way she lived her truth in the heart of the Reagan 1980s. Last week I was able to finally pose those questions. She said that despite being a very politically conscious person, these were not in fact conscious acts. She said:

My mom told me to cover up my arms ever since I was little because I was muscular. She wanted me to be feminine, which did not come easy to me. My body was what it was and I worked it to be a better tennis player. But I also did not fear not looking a certain way. Nowadays I’m hearing from woman players that they don’t want to get into the gym and get stronger because they don’t want to look more muscular than they are. And I’m thinking that’s crazy. You’re a female athlete. You do what you need to do to be the best tennis player you can be, which is exactly I did. And that was that. It was all about function.

As for having her partner in the family section, she said it wasn’t an act of political audacity. It was about having the people closest to her there to provide support.

What was was audacious was me leaving my country and my family when I was 19. So after defecting and being without my family for five years, not being able to see them not having them come see me, everything else was a piece of cake.

But for all of the subconscious politics Martina was executing on the court, she has never been shy about stating her beliefs. This proved to be the case in the interview as well when she said to me:

I tell you if I was in the same position I was in 1975 trying to leave a communist country and trying to live a free life, America is not the country that I would think about going to considering how many rights the GOP is trying to take away. I mean they have openly said it. Ted Cruz, if he’s elected president, the first thing he will do is return Don’t Ask Don’t Tell and roll back same-sex marriage laws. Which is law—hello!—you can’t really take it away. It’s really terrifying the direction we’re going in now. [By voting for Donald Trump] it’s like people are saying they want a totalitarian regime. That’s what I ran away from: authoritarian figures. It’s kind of the same ball of wax where these people tell you what to feel, what to do with your life and your body, women’s rights, gay rights, who to love…. Of course I’m not going to go live anywhere else, but it’s just frustrating. You feel like you are making progress and you just go backwards. There was a joke in Czechoslovakia: The Communist Party dance, it’s one step forward, two steps backward, and everyone is still clapping. That’s what I feel we’re doing right now…. Here I am going to political rant which I didn’t intend to do but I saw it coming when Bush got elected. I said he’s making all the decisions based on money and what’s good for the wealthy and the middle class is disappearing. I said this 15 years ago.

Here’s hoping we’re finally listening. There’s more to the interview. People can listen to it here in its entirety, but it felt bizarre to not take a step back and just say “thank you” to a deeply undervalued “athlete activist” who has shaped so much of the person I am. I doubt that I’m alone.