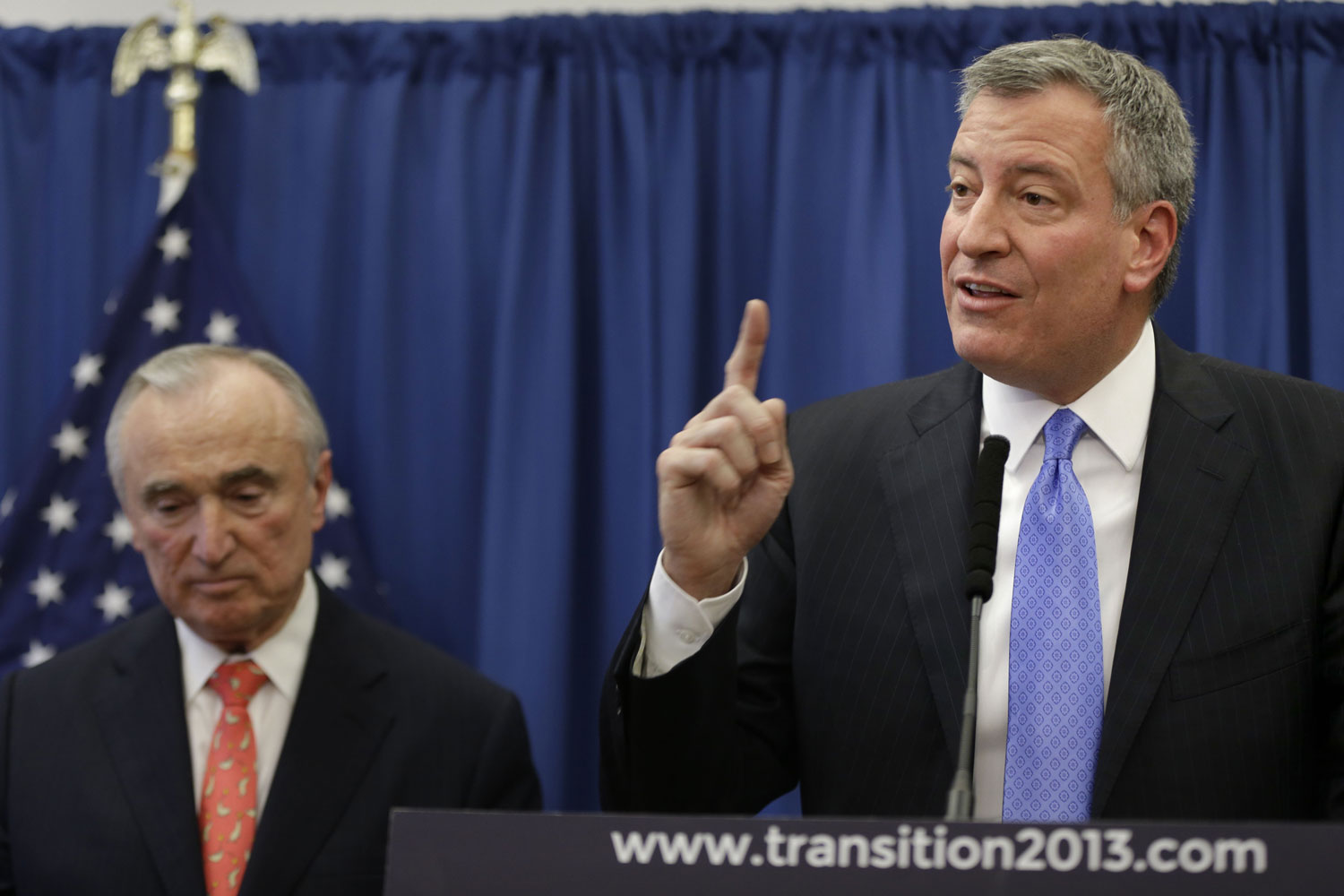 New York, and indeed the entire country, is waiting to see what the newly sworn-in Bill de Blasio will do the first week of January to fulfill his promise to reform stop-and-frisk. His first step should be to drop the appeal of Floyd v. City of New York, a move he promised to make many times on the campaign trail. Floyd is the landmark class action lawsuit challenging the New York Police Department’s stop-and-frisk practices as unconstitutional and discriminatory—an argument that Federal District Court Judge Shira Scheindlin agreed with in a blistering decision that has since been appealed by the Bloomberg administration.

In finding the NYPD liable for unconstitutional, racially discriminatory stop-and-frisk practices, the District Court ordered both a court-appointed monitor to oversee reforms and a joint remedial process that brings all the stakeholders to the table to come up with solutions. The court’s remedial order is a measured and sensitive blueprint for long-overdue reform and can provide the new mayor and commissioner with concrete tools to figure out how to make stop-and-frisk work for the police department and the communities they police.

De Blasio has said that the legal decision finding the stop-and-frisk practices unlawful is correct and that he will move away from Bloomberg-era policing tactics. He has also said that he will work with the court-appointed monitor. These are great signs. However, the road to reform will be a long one, and De Blasio and his police chief, Bill Bratton, will need to make the Floyd remedies a top priority in order to bring real change to neighborhoods that have been living under siege for years.

Once the stop-and-frisk appeal is dropped, here are the top ten actions de Blasio and Bratton should take as part of the Floyd remedies processes to move forward with stop-and-frisk reform and end racial profiling.

1. Allow community stakeholders to be part of the process for change. The court ordered the city to work with plaintiffs to develop reforms. It has suggested a collaborative process used successfully in Cincinnati as the model. There they changed policies, crime continued to drop and they saw a reduction in shooting deaths, all while vastly improving the relationship between the Cincinnati Police Department and communities of color. Over time and when done correctly, a joint remedial process can build community relationships with police and break down decades of mistrust.

2. Embrace a court-appointed monitor to help the Police Department develop the right reforms and make sure they are fully and effectively implemented. Every other major city that has experienced longstanding and department-wide problems that led to federal lawsuits has used a monitor with full access to the department. Monitors capitalize on departments’ existing systems, bring in experts to help and troubleshoot ways to minimize costs or avoid further expensive litigation. Even more important, they provide independent reports for the court and the public and legitimize police departments’ reforms. A court monitor is not to be confused with the soon-to-be-appointed inspector general of the NYPD, who is also needed but has more limited authority, a larger portfolio and can’t do the job of a monitor.

3. Create an early warning system as part of the remedial process. Many other large urban police departments have a centralized, integrated data system that allows supervisors to monitor police officers in order to spot troubled officers and misconduct before a police shooting or other critical incident occurs. The new administration should develop a system with the monitor, plaintiffs and experts in the policing field, relying in part upon existing data collection methods.

4. Create strong and meaningful internal auditing procedures to ensure real assessment of the constitutionality of stops and frisks. Public institutions like schools and hospitals use internal audits to prevent problems and evaluate their internal procedures. The NYPD can and should do that as well. In fact, the department was required to create audits as part of the 2003 settlement agreement in Daniels v. City of New York, the Center for Constitutional Rights’s predecessor case to Floyd, but created superficial audits without much meaning, which they nevertheless failed year after year.

5. Train and retrain officers to prevent targeting of young black and Latino men. The nine-week trial brought to light evidence that bias is ingrained at the highest levels of Bloomberg’s NYPD, with some leaders viewing innocent behaviors by certain civilians as inherently suspicious. New leadership must see that officers are trained on the correct law and make sure they know that stopping the “right people” (NYPD officials’ code for black and Latino men) is a form of racial profiling. They should follow steps taken by other police departments, including the Los Angeles Police Department under Bratton’s leadership, and incorporate tools to recognize unconscious bias into police department training.

6. Improve accountability when an officer illegally stops or profiles someone. The parties and the monitor will need help from experts to devise effective and fair solutions. Whatever the processes put in place, though, they must correct the current bias against complainants. The head of the Department Advocate’s Office, the office responsible for discipline of NYPD officers, testified at trial that even when the Civilian Complaint Review Board believes that a civilian’s version of an encounter is true, the NYPD credits the officer’s version instead, without conducting its own independent investigation.

7. Supervise and evaluate not the just the number but the constitutionality of NYPD officers’ stops and frisks. Supervisors must talk to officers about why they stopped, frisked and searched individuals and ensure that objective and individualized suspicion existed for the actions taken. It will also be necessary to change the system of documenting stops to allow supervisors to do a better job of determining whether a stop was made according to the law.

8. Create a Police Department culture where constitutional policing is expected and taken seriously. Bratton has said that constitutional policing is compatible with effective policing. It is more than compatible, it increases public safety: people in high-crime neighborhoods are more likely to report crime and cooperate with the police if they know complaints are fairly investigated, bad cops are punished and police are in their neighborhood to prevent crime, not to target young people going to school or work.

9. Get rid of harmful quotas and change CompStat. Police officer unions, community members and a federal court all agree that a race for more numbers should not drive stop-and-frisk practices.

10. Rely on experts in policing and other relevant fields. Experts can help the parties, monitor and new commissioner improve stop-and-frisk practices. Best practices and reliable research can only make policing better and communities safer.

With the backing of the overwhelming majority of New Yorkers, Bill de Blasio has set his sights on fixing the abuses of the NYPD’s stop-and-frisk practices. It’s a long road to reform, but these steps provide a reliable and tested starting point. Together, the plaintiffs in Floyd, stakeholders and new administration can build a better, safer New York.