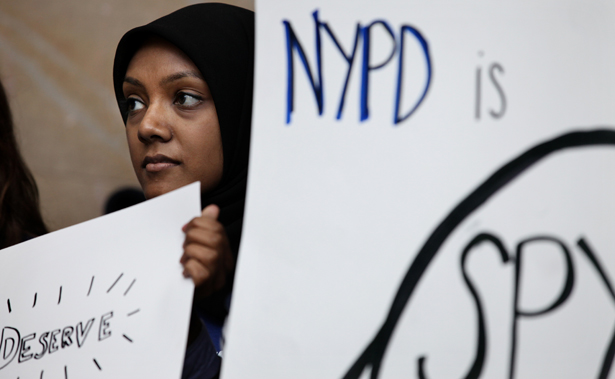 NYU student Fatima Kutty gathered with other students, faculty and clergy to discuss the surveillance of Muslim communities by the NYPD. (AP Photo/Craig Ruttle)

A few weeks ago, I wrote about how the stop-and-frisk numbers in New York City, as of March, had dramatically declined, but the NYPD was arresting increasing numbers of subway dancers, panhandlers and those caught on minor violations such as drinking beer in public. The long fight against the unconstitutional stopping, questioning and frisking of black and brown youth had yielded results, but the NYPD simply shifted strategies to ensure their continued criminalization.

The week before that, Anna Lekas Miller wrote here at The Nation about the disbanding of the NYPD’s Zone Assessment Unit—the outfit responsible for spying on Muslim communities. Again, the work of activists and grassroots organizers resulted in what appeared to be progress. But Lekas Miller wrote at the time:

Yet, as much as the demise of the Zone Assessment Unit signals a step in the right direction, many Muslim community members question how significant the move really is. They worry that the change is more cosmetic than actual, a splashy declaration that obscures the way surveillance continues by other names. And after more than a decade under the NYPD’s watchful eye, who can blame them for the suspicion?

And, as luck would have it, this weekend we learned about the Citywide Debriefing Team, described by The New York Times as “a squad of detectives [that] has combed the city’s jails for immigrants—predominantly Muslims—who might be persuaded to become police informants.” Here’s more:

Last month, the Police Department announced it had disbanded a controversial surveillance unit that had sent plainclothes detectives into Muslim communities to listen in on conversations and build detailed files on where people ate, prayed and shopped. But the continuing work of the debriefing team shows that the department has not backed away from other counterterrorism initiatives that it created in the years after the Sept. 11 attacks.

These informants differ from traditional police informants, who are often asked to provide police with information about criminal activity. The Citywide Debriefing Team recruited people solely on the basis of their Muslim identity, with no prior knowledge of any crimes necessary. So while the NYPD has ended its practice of mapping and spying on Muslims using plain clothes police officers, it’s producing the same results with a different tactic. Not much different from what has happened with stop-and-frisk.

And this keeps happening because we, as American citizens, refuse to question the fundamental goals of policing.

We often find ourselves caught in a debate about the particularities of certain egregious police tactics. And while it’s important to protect communities and people in the here and now, what we miss is a larger discussion about the role police should have in law enforcement. Right now, we seem to have conceded that the police ought to play a preventive role, pre-empting crime by aggressively seeking out potential lawbreakers. That means that the police are granted discretion to determine who constitutes a potential lawbreaker. In a country built on suspicion of the “other,” that more often than not means black and Latino youth, and in a post-9/11 world, Muslims of Middle Eastern descent. As such, police are given tools (stop-and-frisk, surveillance) that abuse the rights of the already marginalized, under the auspices of serving and protecting the greater good.

Then those communities fight back. They take to the streets and to the courtrooms in a fight to be treated like human beings and not presumed to be thugs or terrorists, under whatever definition of those terms that is being used to justify police overreach. And sometimes they win. But the wins are fleeting because the police adopt new, some may say more refined, approaches to doing the same job of terrorizing these communities.

The cosmetic changes to the police state give us the false impression that the nature of policing has changed, that somehow it isn’t about monitoring, arresting and locking away the “other” as a way of “protecting” the true citizenry. We honestly believe that if we do away with the most blatantly destructive, racist, xenophobic, sexist etc. police practices then we do away with the problems of police abuse. Not if the philosophy doesn’t change.

Yesterday, it was reported that the “New York Police Department will significantly limit the practice of seizing condoms for use as evidence in prostitution-related cases, ending a procedure that health officials had long criticized as undermining their efforts to protect [sex workers] from disease.” Now, how long before the police find a way around this, too?