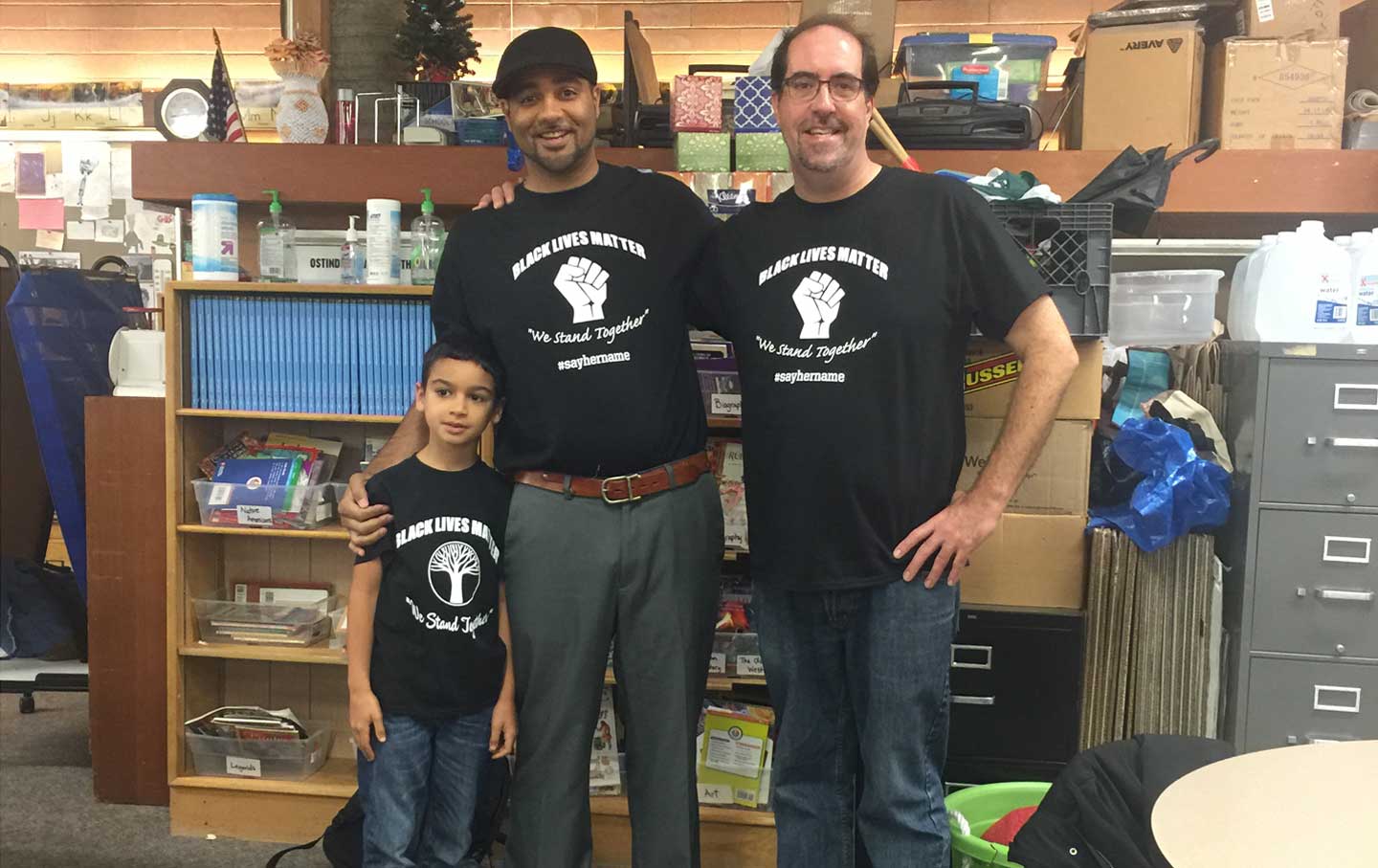 Jesse Hagopian, center, with his son and his son's fourth-grade teacher in Seattle, Washington, on October 19, 2016. (Courtesy of Jesse Hagopian)

For a city with a black population of just 8 percent, Seattle has always had a rich tradition of resistance to racism, stretching from the civil-rights movement to a particularly unique and effective chapter of the Black Panther Party to today’s movement for black lives.1

On Wednesday, another chapter in that history will be written. Over 1,000 Seattle educators plan to attend school wearing T-shirts to school that read “Black Lives Matter/We Stand Together.” This action was supported unanimously by their union, the Seattle Education Association, and has been backed by people like 1968 Olympian Dr. John Carlos, Noam Chomsky, Jonathan Kozol, and Melissa Harris-Perry. These prominent names and others signed onto a statement of support that reads:2

Seattle teachers…have our full support. In the United States today, we cannot do enough to affirm and support our black students. Seattle’s teachers are not only well within their right to exercise freedom of speech by wearing such T-shirts, they are making an important gesture of solidarity—one that gives us hope for the future.3

After the school day, there will be a rally and roundtable discussion that will include community leaders, teachers, students, Seattle-born Grammy Award–winning artist Kimya Dawson and the Seattle Seahawks’ Michael Bennett.4

It is not merely the presence of the outspoken Bennett that also makes this a sports story. This action showcases the dynamic relationship between sports and social movements. The seeds of this action were planted last month when teachers at Seattle’s John Muir Elementary were going to wear Black Lives Matter shirts to coincide with a community cultural festival only to have their school face bomb threats for their efforts. Their event was canceled, but the idea for a citywide solidarity event started to take shape.5

Colin Kaepernick’s anthem protest for police accountability is creating space for others to take their own actions. At Seattle’s Garfield High School, the football team and the women’s volleyball team made national news by taking a knee during the anthem. These young people also faced threats of violence for their actions but students, faculty, and administration stood together.6

This put Seattle on the map nationally in discussions both on the sports pages and in Black Lives Matter circles. Now the teachers are taking it to the next level in a manner organically connected with the actions of students. Alongside community leaders and members of the Seattle Seahawks, members of the Garfield sports teams who took a knee will be part of leading Wednesday’s after-school rally as well.7

One of the organizers for Wednesday’s action, Garfield history teacher Jesse Hagopian, said to me, “You can only understand the Seattle educator’s union unanimous vote for this action in the context of the Garfield High School football and girls’ volleyball teams who are taking a knee for Black lives during the national anthem and helping to inspire people across the city and the country to take action against racial injustice.”8

What we are seeing in Seattle is a textbook example of the dynamic relationship that can develop between sports and social movements. It starts with the movement off the field. It always does. Then it reflects on the field of play, bringing this protest to a space that challenges both right-wing sports fans and a liberal status quo that has always pushed for sports to be a “safe space” from resistance politics. This relationship is highlighted by the presence of Seahawk Michael Bennett—the Bernie Sanders–voting, NCAA=dragging, Black Lives Matter–supporting defensive end—who could probably be elected mayor of the city on the day he retires. Bennett is emboldened by the Garfield athletes and activists, and now, in turn, their collective courage has emboldened hundreds of teachers in arguably the most important union in the city, to take up the call for solidarity and black lives. Their union statement reads:9

Whereas the SEA promotes equity and supports anti-racist work in our schools; and,10

Whereas we want to act in solidarity with our members and the community at John Muir who received threats based on their decision to wear Black Lives Matter t-shirts as part of an event with “Black Men United to Change the Narrative”; and,11

Whereas the SEA and SPS promote Race and Equity teams to address institutionalized racism in our schools and offer a space for dialogue among school staff;12

Therefore be it resolved that the SEA Representative Assembly endorse and participate in an action wearing Black Lives Matter t-shirts on Wednesday, October 19, 2016 with the intent of showing solidarity, promoting anti-racist practices in our schools, and creating dialogue in our schools and communities.13

This response is not only an example of community, sports, teachers, and unions “laying siege” to racism. It is also a moment in this dreary fall political season of how hope can blossom when we organize beyond the ballot box.14

Update: Any discussion about sports, politics and #BlackLivesMatter in Seattle this fall has to include Seattle Reign soccer star Megan Rapinoe, who takes a knee during the anthem as an act of solidarity. I have written about Rapinoe extensively and think that what she has done holds national importance. I neglected to remember when writing that she plays for a Seattle franchise and is absolutely a part of  what has germinated throughout the city, most notably the idea that white people have a role to play in the struggle against racism and police violence. I regret that she was not mentioned in the first draft of this piece.15