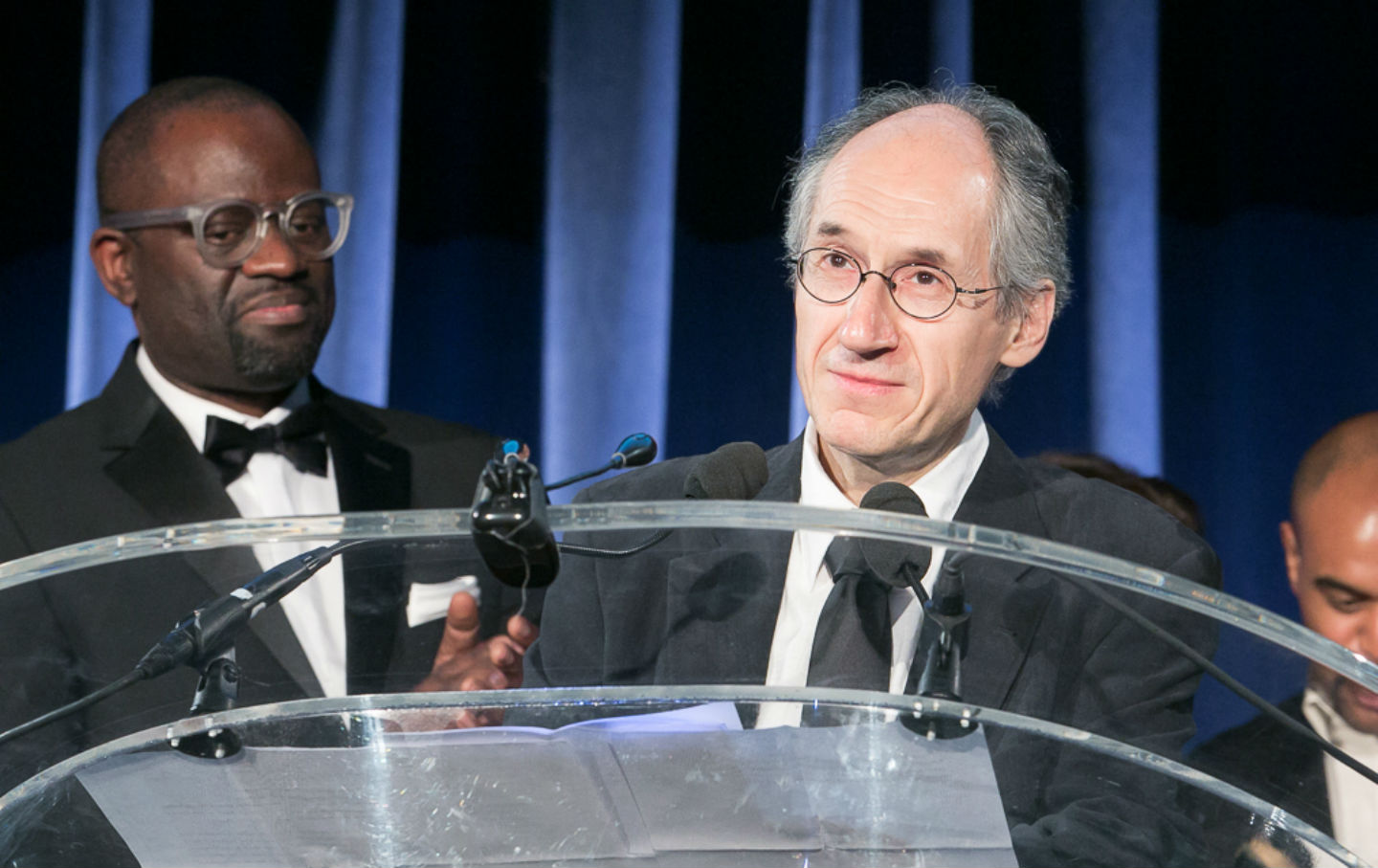 As a former board member of PEN and a believer in its mission—to defend writers’ freedom of expression in the United States and around the world—I was pleased to accept the organization’s invitation to be a table host this year.

And then, as the world knows, six writers, eventually supported by more than 100 other PEN worthies (not including, among others, Salman Rushdie, Art Spiegelman, and our own Katha Pollitt; see page 8), announced that they would boycott the dinner to protest PEN’s decision to give the first PEN/Toni and James C. Goodale Freedom of Expression Courage Award to Charlie Hebdo, the Paris-based satirical journal whose editors had been murdered only months before for doing what they did, which was deploying satire (mostly visual) to attack the powers that be. The protesters objected that Charlie’s “cartoons of the Prophet must be seen as being intended to cause further humiliation and suffering” for a “population that is already marginalized, embattled, and victimized.”

Here let me state my interest: As author of The Art of Controversy: Political Cartoons and Their Enduring Power, I was and am a believer in the power of visual language, but I also know how often cartoons are misinterpreted. When The New Yorker ran cover art during then-senator Barack Obama’s first presidential campaign that showed him and his wife, Michelle, in terrorist garb, a number of readers canceled their subscriptions in protest. In fact, as New Yorker editor David Remnick explained at the time, the cover was not intended to attack the Obamas as terrorists, but to satirize “the distortions and prejudice about Obama.”

Also, although I cherish PEN’s mission and share its values, I have seen its custodians go astray in the past. For example, back in the pretty good old days when I was on PEN’s board, none other than PEN president Norman Mailer took it upon himself to invite Ronald Reagan’s secretary of state, George Shultz, to address PEN’s annual celebration. As E.L. Doctorow pointed out at the time in The Nation, by inviting Shultz, “PEN has put itself in the position of a bunch of obedient hacks in a writers union of an Eastern European country gathering to be patted on the head by the Minister of Culture.” Noting that Shultz’s State Department had applied the ideological exclusion provisions of the McCarran-Walter Act, “which keeps out such dangers to the republic as the Nobel Prize winner Gabriel García Márquez,” Doctorow asked, “Why has American PEN betrayed itself?”

Was PEN betraying its mission once again by bestowing the award on Charlie Hebdo? Was short-story writer Deborah Eisenberg right when she wrote to PEN’s executive director: “To me…the decision to confer [the award] on Charlie Hebdo almost looks less like an endorsement of free expression than like an opportunistic exploitation of the horrible murders in Paris to justify and glorify offensive material expressing anti-Islamic and nationalistic sentiments already widely shared in the Western world.” She suggests that, instead, PEN might have given its courage award to someone like Chelsea Manning, Edward Snowden, or Laura Poitras. I wish that PEN (like the Fertel Foundation and the Nation Institute, which have awarded Ridenhour Prizes for Truth-Telling to both Snowden and Poitras) had done exactly that, but I don’t think the decision to honor Charlie partook of anti-Muslim prejudice, and here’s why:

First, the widespread claim that Charlie is not an equal-opportunity religion-basher turns out to be wrong. Le Monde conducted a study of Charlie covers from 2005 to 2015 and found that only 13 percent of them “poked fun mainly at Muslims…in fact, Charlie Hebdo was not ‘obsessed’ with Islam. If there was an obsession, it was rather directed at Nicolas Sarkozy and, to a lesser extent, Le Pen and François Hollande.”

Second, and more important, I agree with those who have noted that the Goodale award is for courage, not content. When I called Jim Goodale to ask what he thought of PEN’s decision to bestow the award on Charlie, he said that he and his wife were all for it—and after making clear that they both understood that the donors should have no say in the selection of awardees, he added that “the award is not for what is said. It’s for the right to say it. In this case, journalists got killed for what they said. They should be honored, and my wife and I are extremely proud to do that.”

And finally, a word about satire as a form. As the long-ago founder, editor, and publisher of Monocle, whose editorial policy was that “the views of our contributors, no matter how conflicting and contradictory, are the views of the editors,” I plead guilty to having a sentimental attachment to journals of political satire as unique and effective instruments of criticism, constructive and otherwise.

I’ll end on a personal note. In 1999, a number of people who had been blacklisted in Hollywood during the McCarthy era (along with others who identified with them) objected when Elia Kazan—who had “named names” before HUAC—was honored for “lifetime achievement” at the Academy Awards. The protesters didn’t boycott the ceremony, but chose rather to sit silently while others stood and cheered. I wish the PEN boycotters had done the same.