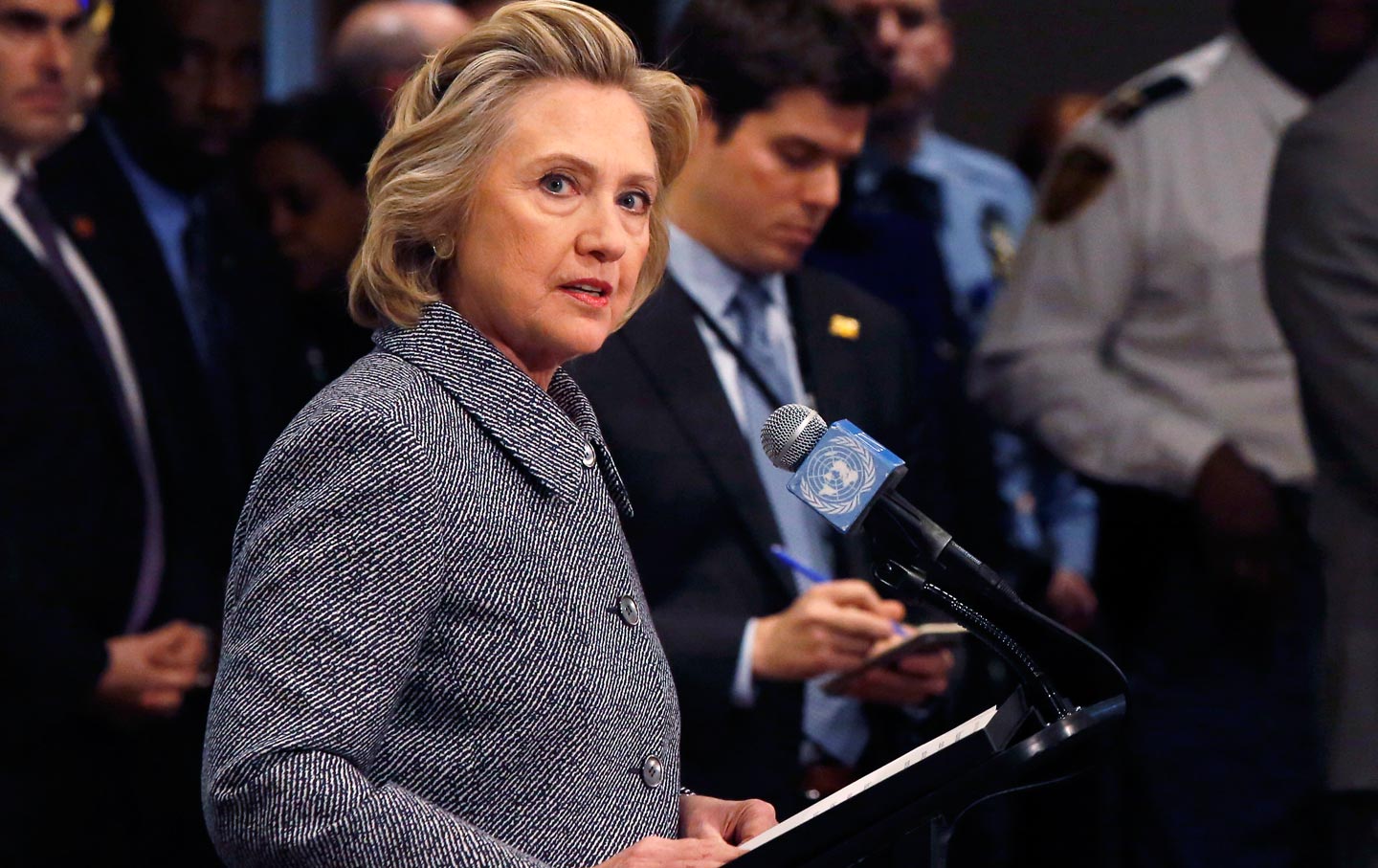 Former secretary of state Hillary Clinton, at a news conference in New York, said she did not e-mail any classified material to anyone while at the State Department. (Reuters / Lucas Jackson)

When Bernie Sanders told Hillary Clinton in their first debate back in October that he was “sick and tired of hearing about your damn e-mails,” he spoke for most of us. Yet she continues to be vulnerable on this issue: While the FBI recently recommended no charges in the matter, FBI Director James Comey took the opportunity to rebuke Clinton for her decision to maintain private e-mail servers, which led to a drop in the polls. That’s why Republicans are doing everything they can to keep her e-mail in the news. And now they have a new front in their campaign: They’re arguing that Clinton violated the Freedom of Information Act (FOIA) by storing official information on her private e-mail servers. Anti-Clinton legal activists have brought a lawsuit in US District Court for the District of Columbia based on a potential FOIA violation, and the FBI’s decision did not resolve that question—so expect to hear lots more about Clinton’s e-mails between now and November.

The Freedom of Information Act has historically been a powerful weapon against government secrecy. Government officials everywhere, including Hillary Clinton, have always liked secrecy; by keeping the public from learning what they have done, government officials hope to avoid criticism, hinder the opposition, and stay in power. But democracy in America is not powerless before this practice. FOIA requires that officials give the information in their files to “any person” who requests it—unless it falls into a small number of exempt categories, including “national security.” Journalists and historians have relied on the FOIA for several decades to do their work, exposing official lying, corruption, and cover-ups. (I’ve been one of them: I sued the FBI for their Nixon-era files on John Lennon, challenging their claim that releasing parts of the file would endanger “national security.” When the files were eventually released, they didn’t involve national security, but they did document White House abuse of power in ordering Lennon’s deportation from the United States as the 1972 election was approaching in an effort to silence him as a critic of Nixon’s.)

There’s one big problem, however, with the FOIA: It applies only to documents in the files of federal agencies—and that’s why Clinton’s setting up private servers creates a conflict with the freedom-of-information law. Officials long ago figured out that they could avoid disclosing the records of their actions by moving records outside of government-agency control. The most notorious has been Henry Kissinger. Of course, in his day as secretary of state there was no e-mail; instead, there were telephone records. When he left Washington, Kissinger prevented disclosure of his phone records under the FOIA by removing them from the State Department and donating them to the Library of Congress, which is not a “federal agency,” and which agreed that, for a long time to come, those records would be made public only with the consent of the other parties to the calls. The Reporters’ Committee for Freedom of the Press challenged the agreement by filing a FOIA lawsuit for the documents. The Supreme Court eventually ruled that, since the records were no longer at the State Department, it didn’t have to comply; and, since the Library of Congress is officially part of Congress, it didn’t have to comply either, because the FOIA doesn’t cover Congress.

Kissinger’s intent in removing documents from the State Department was to keep them secret. When Hillary Clinton set up a private e-mail server at her home, did she have a similar intent? We don’t really know. Initially, she said the private server was for private e-mail—“emails about planning Chelsea’s wedding or my mother’s funeral arrangements.” Thanks to the FBI investigation, we know that was false—30,000 e-mails on those private servers dealt with her work as secretary of state.

That’s why Republicans are now focusing on Clinton and the FOIA. When Comey appeared before the House Committee on Oversight and Government Reform, Committee chairman Jason Chaffetz asked if the FBI had investigated whether Clinton had intentionally tried to undermine the FOIA by setting up a private server. Comey said the FBI had not investigated that question, but that “our best information is she set it up as a matter of convenience.”

Was it a crime for Hillary to use her private server for official communications? No. It was not a crime then—and it’s not now. But it violated the spirit of the Federal Records Act and the FOIA, which require preserving government documents so that they can be located and considered for release to requesters. Dan Metcalfe, who headed the Justice Department’s Office of Information and Privacy from 1981 to 2007, wrote in Politico that although Colin Powell as secretary of state used a private e-mail account at aol.com, it was “unprecedented” for a secretary of state to set up her own private server “so that the records of her email account would reside solely within her personal control at home.” That made it possible, he wrote, for her “successfully to insulate her official emails” from the FOIA. He called that “a blatant circumvention of the FOIA by someone who unquestionably knows better.”

But it wasn’t until complaints like that arose that the State Department established a system for saving the e-mail of secretaries, two years after she left office. Tom Blanton, director of the National Security Archive and a leading authority on FOIA issues, told me that the “irony is, if she had only used state.gov for her email, almost none would have been saved, because state didn’t start e-archiving the secretary’s messages until [John] Kerry, and even then only after the Hillary story broke…. Having 30,000 e-mails from her is way beyond anything from any other secretary of state.”

If this case has a deterrent effect on other officials who might seek to circumvent FOIA, that will be good.

Indeed, Congress did not set rules regarding officials’ use of private e-mail accounts until 2014, after the Clinton e-mail scandal broke. Even under the new law, officials are not barred from using private e-mail for official business; instead, it requires that copies of work-related e-mail be forwarded to a .gov account within 20 days.

Now the federal courts are hearing an FOIA suit brought by the right-wing legal organization Judicial Watch, which sued the State Department three years ago seeking documents on Hillary Clinton’s employment of Huma Abedin in the State Department at the same time that Abedin was employed by the private Clinton Foundation. (Judicial Watch has been filing FOIA requests for documents about the Clintons every year for more than two decades.) The case took on new life when the existence of Clinton’s private server was revealed and Judicial Watch raised the question of Clinton’s intent in setting it up. Judge Emmet Sullivan of the US District Court for the District of Columbia in May permitted Judicial Watch to depose two of Clinton’s closest aides, Abedin and former chief of staff Cheryl Mills, and said last month that he might require Clinton herself to testify. That would get the e-mail back in the news and disrupt Clinton’s campaign—which is, of course, the goal of Judicial Watch.

In an unlikely coincidence, the same week that the FBI reported on Clinton’s e-mail, the US Court of Appeals for the DC Circuit ruled that officials can’t use private e-mail accounts to evade the requirements of the FOIA and the Federal Records Act. The case had many similarities to Clinton’s: The White House Office of Science and Technology had claimed it didn’t need to hand over e-mail messages to and from its director because those e-mails had been sent and received from the server at the Woods Hole Research Center—an institution that was not a “federal agency,” and thus not subject to the FOIA. Judge David Sentelle, chief judge of the Court of Appeals for the DC Circuit, wrote that it was against the law for a government official to “deprive the citizens of their right to know what his department is up to by the simple expedient of maintaining emails on an account in another domain.”

But even if the courts eventually rule that Clinton had violated the FOIA along with Federal Records Act, the remedy in such cases is simply for the defendant to hand over the documents the plaintiffs have requested—it’s not a criminal proceeding. Even so, the Republicans would make the most of Clinton’s losing a Freedom of Information lawsuit.

On Monday, the judge in the case heard oral arguments, just in time for the opening of the Republican National Convention. Judicial Watch argued that Clinton’s testimony is “required” to determine whether her intent in setting up a private server was “thwarting of FOIA.” Clinton’s attorney David Kendall replied that she’d explained why she set up the private server many times—including the FBI investigation and the House Benghazi committee hearings: It was “for the purpose of convenience.” “The answer’s not going to change,” Kendall told Judge Sullivan, and thus there was “no legal justification” for requiring her to answer Judicial Watch’s questions under oath. The judge raised the possibility of a compromise solution, requiring that Clinton respond to written questions. He’s expected to issue his ruling “soon.”

How important is this issue, really? It was wrong for Hillary to set up a private server and use it for official business. If this case has a deterrent effect on government officials in the future who might seek to circumvent the FOIA, that will be good. But is it a reason to vote against her in this year’s election? Steven Aftergood of the Federation of American Scientists is a widely recognized authority on government secrecy and FOIA litigation. “This issue has been inflated way out of proportion,” he told me. “Among the top ten reasons to support or oppose Clinton for president, her records-management practices would not have a place on the list.”

Nevertheless, the Republicans have found a new way to keep Clinton’s e-mail in the news for the months leading up to the November election—no matter how sick and tired we may be of hearing about it.