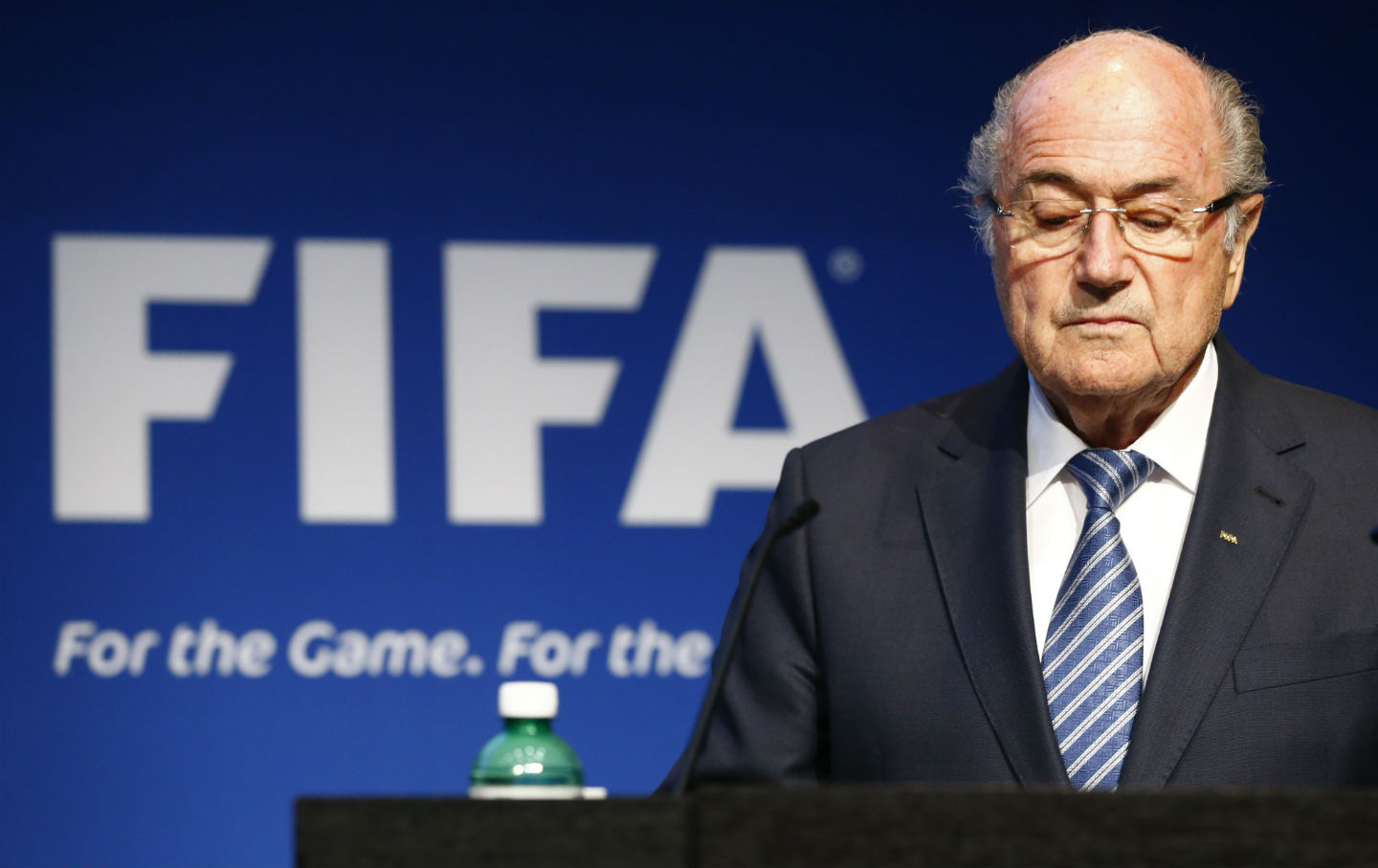 In news that knocked the sports world over with a feather, the 79-year-old FIFA boss Sepp Blatter resigned Tuesday at an impromptu Zurich press conference. Just three days after winning re-election for the fifth time amidst unprecedented scandal, Blatter’s 17-year reign has come to an end. He took no questions and gave no concrete reasons for his departure, making speculation the order of the day. But pompous, bizarre, and off-key to the last breath, Blatter lectured the world that he “will organize an extraordinary congress for a replacement for me as president…. I am now free from the constraints of an election. I will be in a position to focus on profound reforms. For many years we have called for reforms. But these are not sufficient.”

The most “profound reform” that Blatter could possibly pull off has now been completed, relieving the soccer body of himself. Blatter was a dark cloud over the sport: a walking, talking gaffe machine and despot. Imagine a more pompous George W. Bush without a teleprompter and you can get an idea. The Women’s World Cup kicks off in days, and the play promised to be overshadowed by the possibility of indictments against Blatter, as well as reliving endless examples of his sexism.

The indictment question is a very live one. As The New York Times reported Monday, Jérôme Valcke, FIFA’s secretary general, allegedly accepted $10 million in bribes. Blatter has said he knows nothing of this. Today’s resignation makes one wonder. Then there are the threats from European leagues to boycott the 2018 World Cup that came after Blatter’s reelection.

But the greatest reason is rooted in skittishness by the only entities more powerful than Blatter and his coterie: the sponsors. FIFA already lost second-tier sponsors like Johnson & Johnson and Castrol in January due to scandal fatigue. Now there has been a campaign linking top sponsors like McDonalds, Adidas, and Budweiser to the mass deaths of migrant workers in Qatar. Tragically and also predictably, their word is more powerful than the millions of Brazilians who took to the streets.

Blatter’s abdication creates an opportunity to truly reform FIFA in a manner I discussed last year: break it up so there can be a separate entity in charge of transparency, investigations, and oversight. Currently the FIFA foxes luxuriate among the chickens.

Then there are the larger issues of debt, displacement, and militarization of public space that plague countries that host the games. Blatter turned FIFA into a neoliberal Trojan horse and there is no indication that any of the “reformers” coming from Western Europe give a damn about those priorities. Then there is the specter of the United States playing the role of hero. It is difficult imagining issues such as guaranteeing a voice in FIFA by African nations and solidarity with the embattled Palestinian Football Association finding support under the US flag.

Dangers loom, but, if nothing else, Blatter’s leaving in shame is a moment of joy for anyone who has suffered under his rule by graft and shameless love of dictatorship and autocracy. It creates an opening for campaigners to make the ruling body of international soccer worthy of the game. In his press conference, Blatter said, “I only want to do the best for FIFA.” It may not have been by choice, but on this day he certainly did.