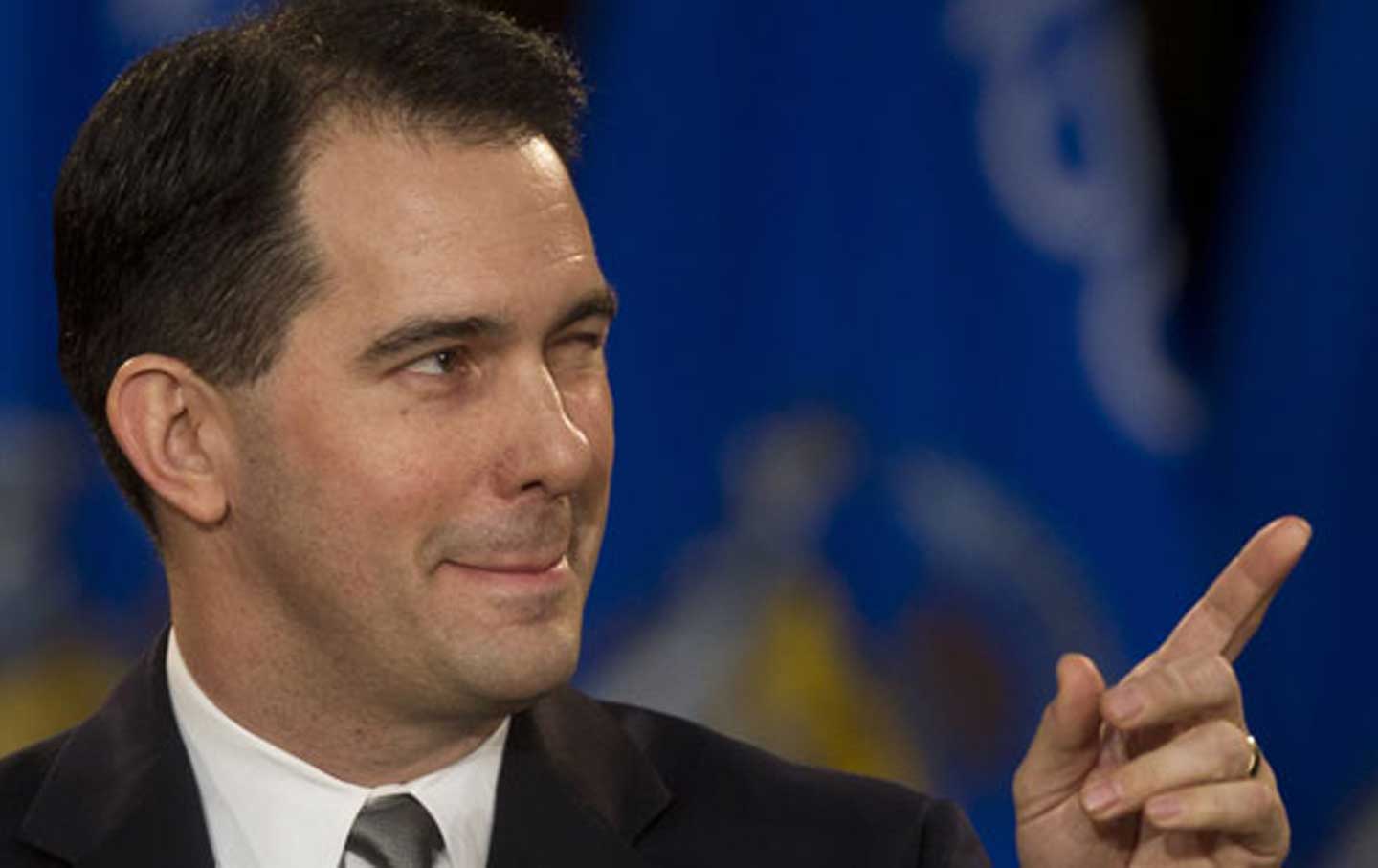 Sports as political money laundering—the process of billionaire owners taking public funds for stadiums and then donating their newfound lucre to the very politicians who facilitated their stadium grab—is nothing new. But it’s difficult to think of an example as brazen—and brazenly hypocritical—as the heist going down in Wisconsin. Governor, presidential candidate and Koch brothers lickspittle Scott Walker is a man who has staked his reputation on the merciless slashing of public spending, with schools and state worker pensions the normal targets. He takes these actions while bellowing about the near-religious merits of free enterprise and “small government.” Well, Walker actually does have a cause that he believes deserves hundreds of millions in public spending. Not schools or hospitals, but a new stadium for the Milwaukee Bucks. The team’s owners are a collection of billionaires who bought a majority interest in the franchise for $550 million, with the last owner, former Wisconsin senator Herb Kohl, retaining a minority stake. They even recently released a new logo shaped like the state of Wisconsin. Yet these good-hearted local folk also let the media run wild with the idea that they would leave the state without a new arena.

As local teachers union leader Mike Rosen said to me, “The billionaire owners and the NBA are blackmailing city and county leaders into bankrolling an arena in one of the nation’s poorest and most segregated cities. The arena and related real estate deals do not address Milwaukee’s good jobs crisis and will do nothing for the unemployed and underemployed in the areas near the north side and south side neighborhoods. The county’s contribution of $80 million which is to be generated through collecting unpaid debts and fines, mainly from our poorest citizens is unconscionable and irresponsible. This is a bad deal and should be rejected.”

It wasn’t. But even more revoltingly, Bucks co-owner and real estate tycoon Jon Hammes—just days before this deal was pushed through—signed up to become the co-finance chair of… wait for it… Scott Walker’s 2016 presidential campaign. Hammes, along with Cubs co-owner Todd Ricketts, will be putting their deep-pocketed, highly connected influence to work toward the goal of raising up to $3 billion for what has been described repeatedly as potentially the most expensive presidential campaign in history.

This absence of shame—coupled with an adolescent’s ardor for Ayn Rand—has long been Scott Walker’s defining characteristic and we are witnessing it again in his slavish pursuit of Bucks-bucks. Take a step back, and the man’s cheeky chutzpah provokes a near awe: Walker has—amidst a highly scrutinized presidential campaign—chosen to bankroll a billionaire backer with corporate welfare who in return will head his presidential financial operation. The optics of this are patently corrosive enough as is, but it’s even worse than that. Walker and the Wisconsin state legislature will pay for it by slashing roughly the same amount of the cost of the stadium from the state’s higher education budget. Over a quarter-billion for the arena and a quarter-billion siphoned from higher ed, and the giving of absolutely no fucks in how it all looks.

This isn’t politics. This isn’t differing economic philosophies. This isn’t even simple hypocrisy. This is trolling-as-governance, and Scott Walker is an expert in this art. This is what compels him to compare trade unionists to ISIS or stand up for the Confederate flag before the Charleston dead had even been put to rest (and then flip on the issue again), or rail against marriage equality while his own children cringe in shame, or stand up for the sanctity of Native American mascots. These qualities undoubtedly make him attractive to a section of the Republican base, the ones currently waving Confederate flags north of the Mason-Dixon Line and hosting Muhammad-drawing contests. He is attempting something audacious: trying to win the Republican nomination solely by relying on a coalition of the “jackass” wing of the party. One can already see his finance team approaching all egg avatars to join the Walker team.

As for Jon Hammes, he has reportedly bought an acre and a half of property around the area where the new Milwaukee Bucks stadium is to be built. They were purchased in advance of the deal being sealed on this stadium in the Wisconsin state legislature. At least we know why Hammes sees a kindred spirit in Scott Walker: They both share an absence of shame and an utter absence of fear that anyone will hold them to account.