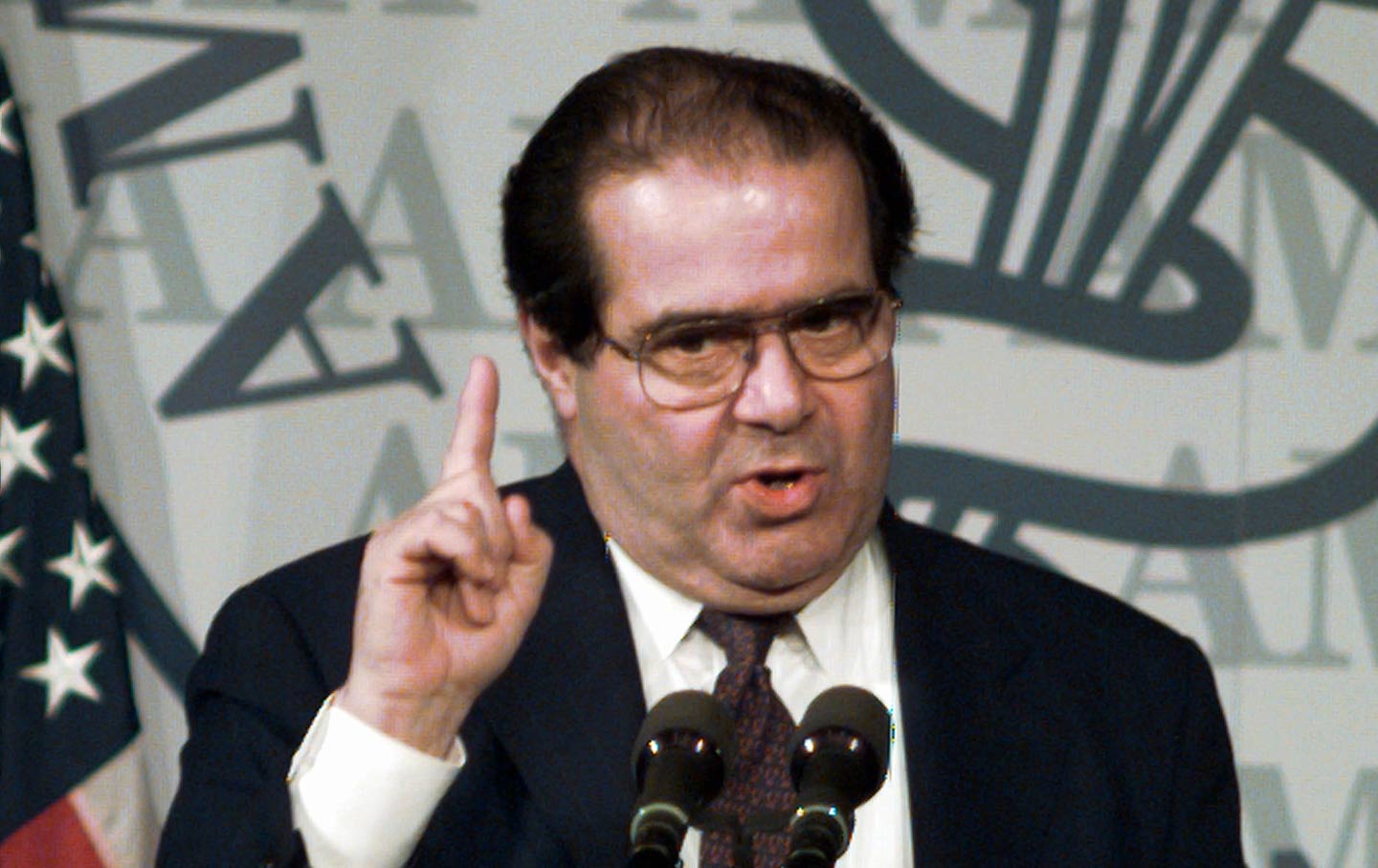 Supreme Court Justice Scalia said that while the Supreme Court is the highest judicial venue in the country, Congress, not the justices should decide on abortion rights, the death penalty, and physician-assisted suicide. (AP Photo / Susan Walsh)

Antonin Scalia was a paradoxical figure. The late Supreme Court justice is widely credited as one of the most brilliant and important jurists in American history, having changed legal debates on the fundamental question of how judges should interpret the Constitution. But at the same time, he was on the losing side of many of the Court’s most important decisions, including those that upheld the Affordable Care Act, affirmed Roe v. Wade, struck down sodomy prohibitions, extended judicial review to Guantánamo detainees, recognized same-sex marriage, permitted affirmative action, and invalidated the death penalty for juveniles. For a historically influential judge, he lost a remarkable number of headline cases. So how influential was he really?

Of course, many great justices have been on the losing side of important cases. Indeed, one mark of a judge’s greatness is that he dissents so persuasively that, over time, his arguments are adopted by court majorities and became law. Oliver Wendell Holmes Jr. and Louis Brandeis wrote powerful dissents against the convictions of antiwar protesters for their speech during World War I. These dissents are now viewed as the foundation of modern First Amendment jurisprudence, as the force of their reasoning, over time, assumed the force of law.

Not so with Justice Scalia. There seems virtually no chance that his impassioned dissents decrying marriage equality, rejecting constitutional protection for consenting adults enjoying sexual intimacy, and defending the execution of children, for example, will ever become majority opinions. In dissent, he was more likely to be railing about the past than showing his prescience about future developments. He was, in short, the most influential justice without influence in the Court’s history.

This seeming paradox, however, actually reflects different sides of the same coin. Scalia’s theory of constitutional interpretation, known as originalism, maintains that judges should be guided by the original meaning of the Constitution’s terms at the time they were adopted. Any other mode of construing the Constitution, he insisted, gives judges far too much leeway to impose their personal value judgments.

There is no question that Justice Scalia made originalism respectable. His tireless advocacy on behalf of this interpretive method almost single-handedly transformed it from a widely rejected straw man in the 1980s into a serious subject of legal theory today. One sign of his success is that even unabashed liberals, such as Yale law professor Jack Balkin and the late Doug Kendall, founder of the Constitutional Accountability Center, have sought to adopt the method to their ends. And in at least one important decision, District of Columbia v. Heller, the 2008 case involving the Second Amendment right to bear arms, all nine justices engaged in avowedly originalist argument.

But to be an originalist means always to be looking backward. As a result, unless an originalist justice is so persuasive that the Court as a whole adopts his or her method, that justice is unlikely to be very good at predicting or influencing future legal developments. As constitutional law evolves over the course of history to respond to new challenges, originalists are likely to be left behind, gazing back at a more and more remote (and less and less relevant) history.

Scalia was never able to attract a majority of the Court to his particular constitutional faith. Indeed, Heller is the exception that proves the rule. One would be hard-pressed to name any other significant case in which the Court engaged in exclusively originalist interpretation. Everyone agrees, of course, that the Constitution’s original meaning is in some sense a starting point, but apart from Clarence Thomas, no justice who served with Scalia treated originalism as determinative.

Most justices in most constitutional cases over the course of the Court’s 227 years have adopted a more pragmatic “common law” method, in which the principal guides are not the historical understandings of the framers, but the Court’s long line of precedents. Those precedents in turn reflect an adaptation over time of constitutional doctrine to the felt necessities and evolving understandings of the day. In this view, whether the due-process clause protects the right of gay and lesbian couples to marry is decided not by asking how the framers felt about same-sex marriage, but whether the underlying principles of the Court’s prior “right to marry” precedents apply with equal force to gay and straight couples.

Justice Scalia has never been more apoplectic than in his dissent in Obergefell v. Hodges, the court’s 2015 case recognizing the right of gay and lesbian couples to marry. He condemned the majority opinion, written by fellow conservative Justice Anthony Kennedy, as “pretentious” and “egotistic” and said that if he ever to joined such an opinion, he would have to “hide my head in a bag.”

Why such vituperation in a case involving an issue—marriage equality—about which Scalia claimed to care little? Precisely because the majority opinion was an unequivocal refutation of originalist method. If one interprets the Constitution by reference to what it meant when a group of propertied white men voted to adopt it two centuries ago, gay and lesbian couples of course have no right to marry. Recognition of the right depended on evolving understandings. As Justice Kennedy put it, in terms that no doubt smacked of apostasy to the originalist: “Rights come not from ancient sources alone. They rise, too, from a better informed understanding of how constitutional imperatives define a liberty that remains urgent in our own era.”

As the period of the framing grows more and more distant from our own, Scalia’s insistence on tying the nation to the understandings of that generation will become increasingly anachronistic. As brilliant and talented as he undoubtedly was, Scalia’s interpretive method condemned him to the wrong side of history.