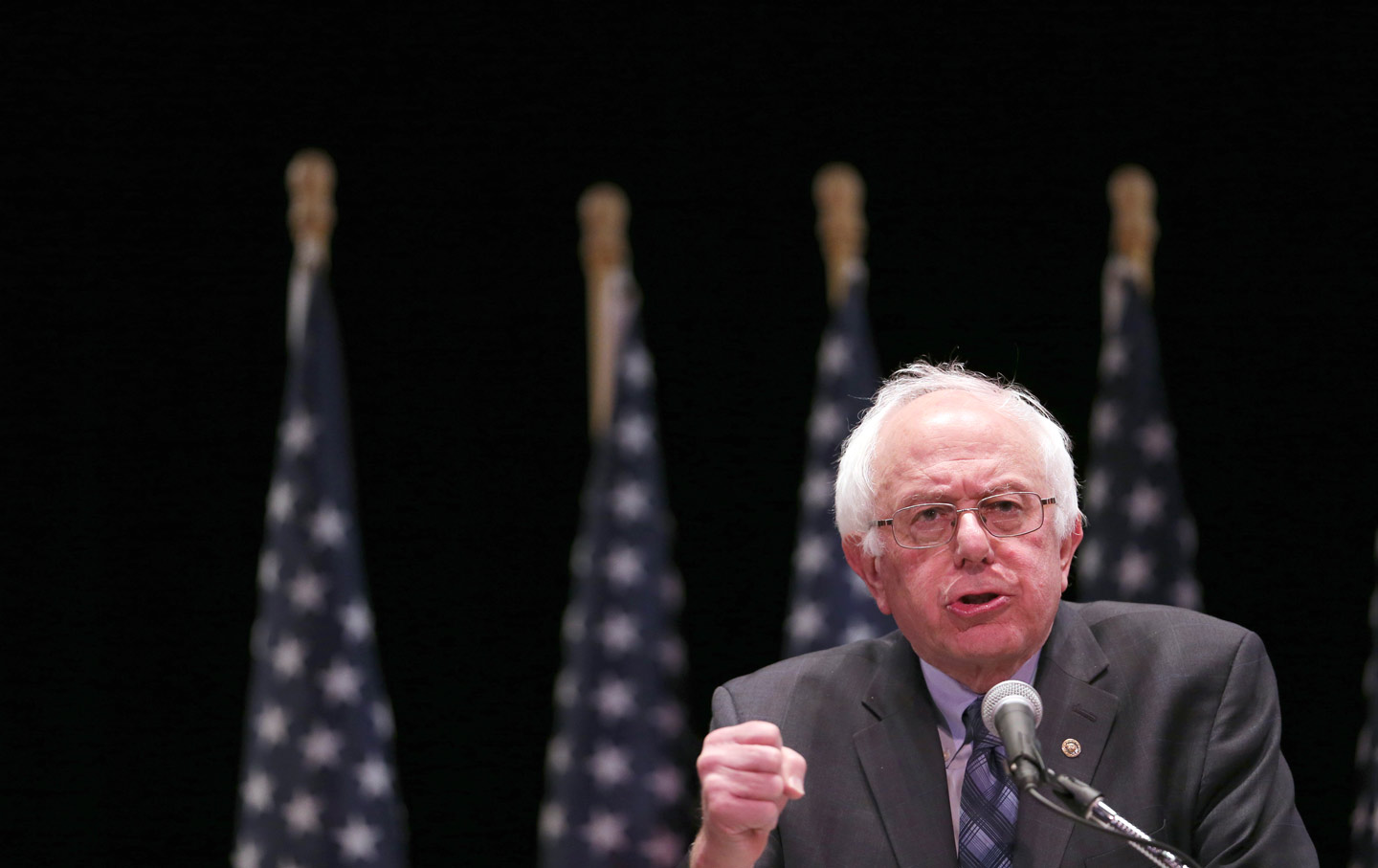 Speaking just a few dozen blocks from Wall Street Wednesday, Bernie Sanders announced that, with regard to so-called “too-big-to-fail” banks, he would “break them up.”

“If a bank is too big to fail, it is too big to exist,” announced the senator from Vermont, as he brought his presidential campaign to New York City’s Town Hall.

Echoing and referencing President Franklin Delano Roosevelt, who took on Depression-era bankers and speculators as part of a broad effort to renew the economy, the senator pledged that a Sanders administration would in its first 100 days develop a list of “too big to fail” financial institutions. ”Within one year,” he announced, “my administration will break these institutions up so that they no longer pose a grave threat to the economy.”

"We have got to establish a tax on Wall Street speculators." -- Bernie Sanders

In a detailed and aggressive speech, which sought to contrast his positions with those of the front-runner for the Democratic nomination, former secretary of state Hillary Clinton, Sanders promised to establish “a 21st-century Glass-Steagall Act” to renew and extend upon New Deal regulations against Wall Street and big-bank speculation.

The senator proposed caps on ATM fees and credit-card interest rates—saying “big banks need to stop acting like loan sharks and start acting like responsible lenders”—and pledged to establish “a national usury law” that would crack down on abusive practices.

Sanders also said he would “structurally reform the Federal Reserve to make it a more democratic institution responsive to the needs of ordinary Americans, not just the billionaires on Wall Street.”

“We need a banking system that is part of the productive economy—making loans at affordable rates to small and medium-sized businesses so that we create decent-paying jobs. Wall Street cannot continue to be an island unto itself, gambling trillions in risky financial instruments,” said the senator, who made it clear, again and again, that he would support prosecuting wrongdoing by speculators, bankers, and CEOs who engage in fraudulent practices.

“Not one major Wall Street executive has been prosecuted for causing the near collapse of our entire economy,” said Sanders, who read a long list of media headlines about “unethical and illegal activity” by Wall Street executives and financial-service professionals. “That will change under my administration. ‘Equal justice under law’ will not just be words engraved on the entrance of the Supreme Court,” he said. “It will be the standard that applies to Wall Street and all Americans.”

The senator earned loud applause when he announced that, just as it would crack down on too-big-to-fail banks, his administration would operate on the premise that “big-time bankers will not be too big to jail.”

Pronouncements of that sort tend to earn headlines, and there is nothing wrong with that.

But it was also significant that Sanders discussed implementing a financial-speculation tax, declaring that “[if] we are serious about reforming our financial system, we have got to establish a tax on Wall Street speculators. We have got to discourage reckless gambling on Wall Street and encourage productive investments in the job-creating economy.”

It was equally significant that the senator proposed practical to Wall Street wrongdoing and speculation: a public option. Specifically, he called for setting up a postal-banking system, like other countries have, and like the United States had until the 1960s.

Promising to crack down on pay-day lenders that prey on the most vulnerable families in America, and to offer real alternatives for low-wage workers who do not have easy access to financial services, Sanders said he would fight to “allow the United States Postal Service to engage in basic banking services.”

Senator Elizabeth Warren and unions representing postal workers have talked up postal banking for a number of years, just as Congressman Keith Ellison and the National Nurses United union have campaigned for a “Robin Hood Tax” on financial speculation. But the Sanders speech ups the ante by making these challenges to banking as usual part of the presidential race.

The senator acknowledged that Wall Street will not respond well to talk of regulation, prosecution and establishing public alternatives to big private banks. He anticipated the fights to come. But, just as FDR spoke 80 years ago of his willingness to accept the hatred of Wall Street in order to establish a fairer economy, Sanders said, “If elected president, I will rein in Wall Street so they can’t crash our economy again. Will they like me? No. Will they begin to play by the rules if I’m president? You better believe it.