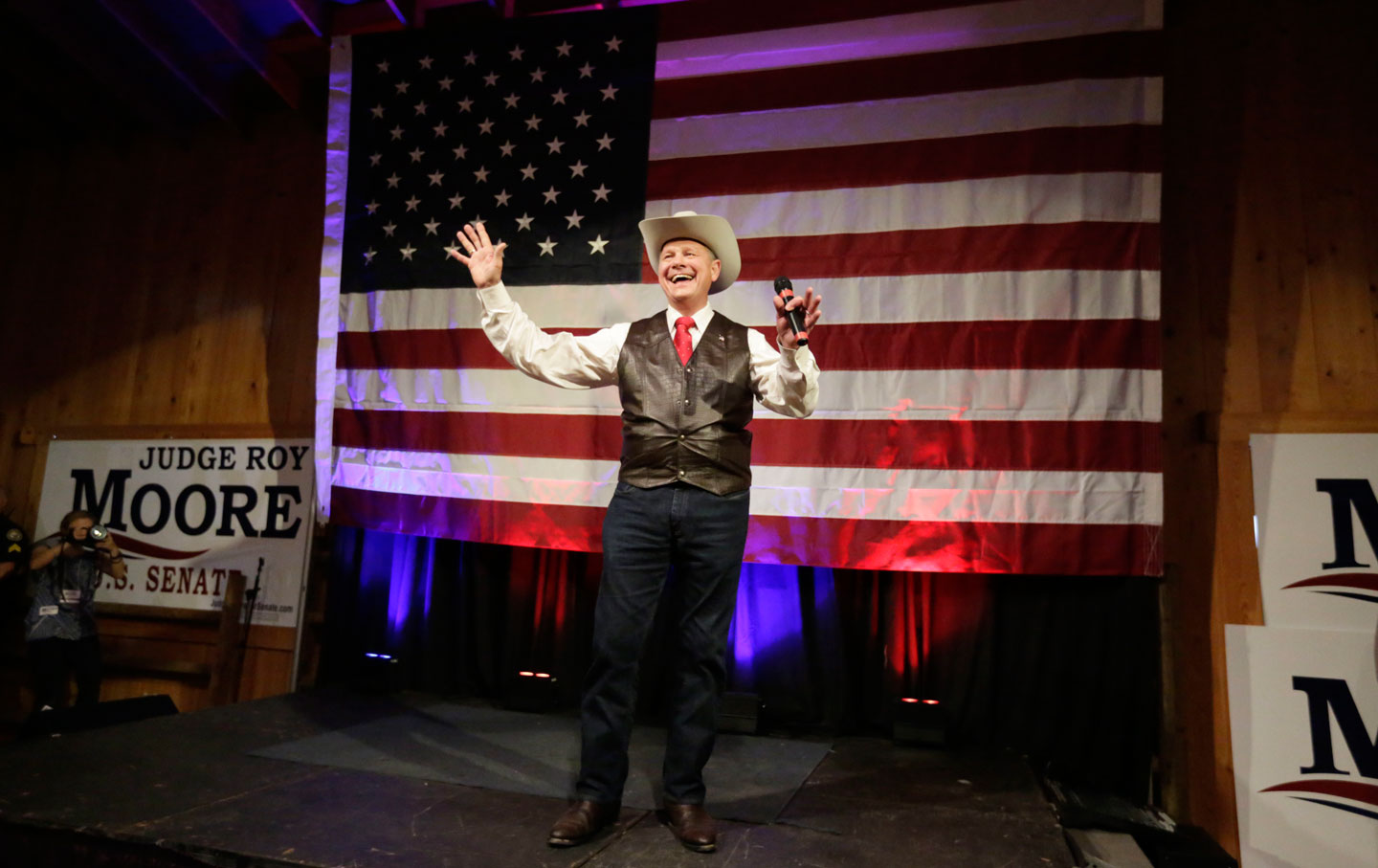 Democrats are desperate to win back control of the Senate, and they are assembling a slate of candidates to make their play for power in next year’s election cycle. But they could dramatically improve their prospects for retaking the chamber in 2018 by grabbing a surprise seat away from the chamber’s Republican majority in 2017. Which seat? The one representing the deep-red state of Alabama, which Jeff Sessions abandoned in order to join the Trump administration.

Who would make the audacious suggestion that Democrats could take the Sessions seat in a December 12 special election? Donald Trump.

On the eve of Tuesday’s Alabama Republican runoff primary, Trump argued that voters should back the candidate he had endorsed—appointed incumbent Luther Strange—over an exceptionally controversial and exceptionally extreme rival, former judge Roy Moore.

Trump waded into the Republican contest on Strange’s behalf because, the president said, Moore would be vulnerable in race against a credible Democrat.

“Roy Moore is going to have a very hard time getting elected against the Democrat,” the president said in a pre-primary interview. “Against Luther they won’t even fight,” Trump said on Monday, while arguing that Moore “has a very good chance of not winning in the general election.”

On Tuesday night, those words came back to haunt Trump. When the results in the Republican runoff were tabulated, Moore had trounced the president’s pick by a 55-45 margin.

Trump, who now says he will campaign for Moore, was busy deleting the pro-Strange tweets he sent before the runoff vote. But Trump can’t delete his assessment of Moore’s prospects, which were rooted in knowledge of judge’s sordid history of disregard for the rule of law, racial and religious bigotry, and political opportunism on a scale grander than that of the president himself.

“Moore, who brandished a revolver during a rally on the eve of the runoff, has promised that he will never compromise,” explained a Washington Post assessment of the newly minted Republican nominee in the highest-stakes special election of 2016.

He has twice been suspended as the chief justice of the Alabama Supreme Court. In 2003, Moore disobeyed a federal judge’s order to remove a statue of the 10 Commandments from the state judicial building. Then last year, after getting elected back to the court, he was removed again after urging state judges to defy the U.S. Supreme Court decision that legalized same-sex marriage. Moore believes in the supremacy of the Bible over the Constitution, and he compares homosexuality to bestiality. Karl Rove has been calling him this year’s Todd Akin.

(Akin was the Missouri Republican Senate nominee who lost a 2012 Senate race after he started spouting off about “legitimate rape.”)

Roy Moore has a track record as an avid “birther,” who as recently as last fall was questioning whether Barack Obama, the nation’s first African-American president, was born in the United States. He argued that Minnesota Democrat Keith Ellison, the first Muslim elected to the Congress, should be prohibited from swearing his ceremonial oath of office on a Quran, and claimed that Ellison’s qualifications to serve in the US House could be questioned because Islam is “directly contrary to the principles of the Constitution.”

An American Bridge study of Moore’s record describes him as “unfit for public office” and notes that “Moore has a history of making racist statements, calling people ‘red and yellow’ and allying himself with white supremacists.”

None of these details prevented Moore from defeating Trump’s preferred contender in Tuesday’s runoff primary, but the president is right when he says Moore is apt to be tripped up in December.

In a deep-red state like Alabama, any Republican nominee in a statewide race has an advantage. But the last time Moore was in a partisan statewide contest, in a 2012 Supreme Court race, he took only 51.8 percent of the vote. And that was in a presidential election year when Republican presidential nominee Mitt Romney was winning 61 percent support across Alabama.

Moore is vulnerable, and national Democrats, unions, and progressive groups need to wrap their head around that prospect. This has to go beyond the kind words for the Jones campaign that are already being spoken by top Democrats. To upset Moore, what’s required is a mission-critical commitment by an opposition party that cannot afford to miss political openings.

That will involve a leap of faith. Alabama’s recent electoral history had not given Democrats much to cheer about.

So it is understandable that national Democrats have tended to ignore this year’s special election to fill the Alabama seat.

Understandable, but unacceptable. The Democratic Party has decayed in recent election cycles, as it has shrunk into itself. In 2016, the party won just 20 states and the District of Columbia. It won just 12 of 34 contests for US Senate seats—and those wins were largely concentrated in states where the party’s presidential nominee prevailed.

Yet there is solid evidence that Democrats can still win very big races in very red states. Just ask Louisiana Governor John Bel Edwards, who won his state’s 2015 gubernatorial race with 56 percent of the vote. He did that in a state that a year later would give Democrat Hillary Clinton only slightly more of the vote (38 percent) than she got in Alabama (34 percent).

In contrast to Strange and Moore, the Democratic nominee for the Alabama Senate seat is a strikingly qualified and able contender, former United States Attorney Doug Jones. A onetime staff counsel for the Senate Judiciary Committee, he has decades of legal and political experience in Alabama. And Jones has a record of accomplishment that stands in stark contrast to the résumés of both Republican contenders.

The Democrat is best known for his efforts in the late 1990s and early 2000s to finally achieve a measure of justice in the case of the 1963 Sixteenth Street Baptist Church bombing in Birmingham. Jones is credited with playing an essential role in winning murder convictions against two of the men who murdered four young girls almost 40 years earlier. Frequently honored for his work on not just civil-rights cases but also cases involving women’s rights, workers’ rights, and the environment, Jones is hailed by Pulitzer Prize–winning journalist and author Diane McWhorter as “bold and aggressive, but also willing to take a risk to be on the right side of history.”

Polls taken before the Republican runoff primary had Jones within four points of Moore.

Jones says, “I think the people in this state are looking at themselves and are saying, ‘we’re tired of being embarrassed.’”

If Doug Jones is right about his native state’s capacity for embarrassment, and if Donald Trump is right about the vulnerability of an embarrassing candidate like Roy Moore, then Democrats have every reason—and every responsibility—to make a major play for Alabama this fall.