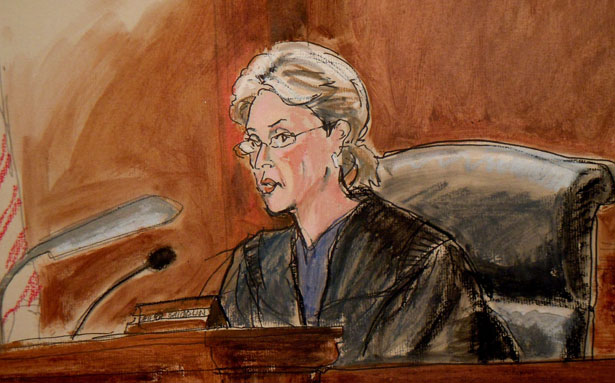 That was good news for New Yorkers. Nearly 90 percent of the 4.4 million people the police stopped for questioning between 2004 and 2012 had done nothing wrong, according to evidence presented at a nonjury trial Scheindlin conducted last spring.

But the announcement leaves in limbo a devastating ruling by a federal appeals court panel, which removed Scheindlin as the judge presiding over challenges to the NYPD’s stop-and-frisk policing since 1999. The removal order was a crushing blow to Scheindlin’s professional standing and sent a chilling message to other judges: tread carefully when handling cases that challenge government action.

Scheindlin issued two rulings last August. One found the NYPD’s stop-and-frisk procedures unconstitutional, and the other ordered the city to implement reforms under the supervision of a court-appointed monitor.

The class plaintiffs in the stop-and-frisk challenge have asked the entire Court of Appeals for the Second Circuit to review the removal order, issued by a three-judge panel of the court. But given the legal posture of the case—a new judge has already been assigned to preside over it, and the panel has ordered the request for review held in “abeyance”—it is likely the full-court review will never take place.

Should the panel’s removal order remain on the books, it would set a terrible precedent. The court’s removal of Scheindlin even before it decided the appeal was very likely unprecedented. Moreover, the ruling was so marred by departures from customary practices as to raise questions about the panel’s neutrality.

In a sign of undue haste at a court known for its attention to detail, the unsigned ruling contained a glaring error, which the three judges were forced to correct two weeks later. Further, the panel removed Scheindlin even though the city never sought her removal in the case; the panel then faulted her for taking a step the city had not objected to six years earlier—and it did so in a manner that precluded her from defending herself from the suggestion that she had been unethical.

Research by University of Virginia Law School professor Toby Heytens, soon to be published in the Stanford Law Review, underscores the aberrant nature of the panel’s removal order. Heytens found that appeals court replacements of trial judges have been highly unusual. More important, he did not find a single case issued by any of the nation’s thirteen federal circuit courts in which removal was required before an appeal had been decided on the merits.

That does not mean the city didn’t have a route to seek Scheindlin’s removal. It could have asked her to recuse herself; if she refused, it could have taken the issue to the Second Circuit, where it would have had to demonstrate her bias, and she would have had an opportunity to defend herself.

The importance of having such an opportunity is underscored by the way the circuit’s initial order was drawn. Scheindlin’s replacement was required, the panel wrote, because she “ran afoul” of her ethical duty to maintain the “appearance” of fairness. Two weeks later, the panel rolled back its misconduct finding, but the revised order did not remove the stain on Scheindlin’s reputation, and despite the softer formulation, the panel did not back off its removal. Why insist on what the court’s own precedents describe as an “extraordinary remedy” if her conduct was not serious enough to warrant it?

Nor were the panel’s reasons for removing Scheindlin persuasive. It faulted her for suggesting to the challengers in 2007 that they file a new “related case” rather than extending a 1999 settlement. In an exception to the standard practice of randomly assigning cases, a court rule permitted Scheindlin to handle both cases as long as they were related. The two cases were in fact closely intertwined. The 1999 case had been settled, and the one Scheindlin suggested be filed as “related” aimed to build on the earlier agreement by using data it generated to prove that rules it required had been ineffective in curbing unconstitutional stops.

The panel also wrote that Scheindlin had signaled bias against the city in her remarks to reporters during the trial. In the most controversial one, she told The New Yorker that “too many” of her peers who had previously worked as federal prosecutors in Manhattan had become “government judges.” That comment undoubtedly riled many former prosecutors now on the bench, but the point she was making was that she treated all litigants equally.

If the panel’s removal of Scheindlin stands, it could jeopardize a prized heritage. Since the mid-twentieth century, federal trial judges have dismantled Jim Crow and other, more recent laws that sanctioned discriminatory patterns affecting housing, schools and the right to vote. They have also tackled abysmal conditions in jails, mental hospitals, homeless shelters and foster care.

Many of those rulings generated public outrage because they ran against ingrained social norms and required public funds to remedy constitutional violations affecting the poor and powerless. Perhaps no federal judge faced more venomous attacks than Frank Johnson Jr., who issued dozens of decisions remedying racial discrimination in Alabama. Segregationist Governor George Wallace branded Johnson an “integrating, scalawagging, carpet-bagging liar.” Crosses were burned on his lawn twice, and his mother’s home was bombed. Johnson had twenty-four-hour federal protection for fifteen years. But could he have persisted if he had faced a hostile circuit court armed with the power to remove him from cases with the stroke of a pen?