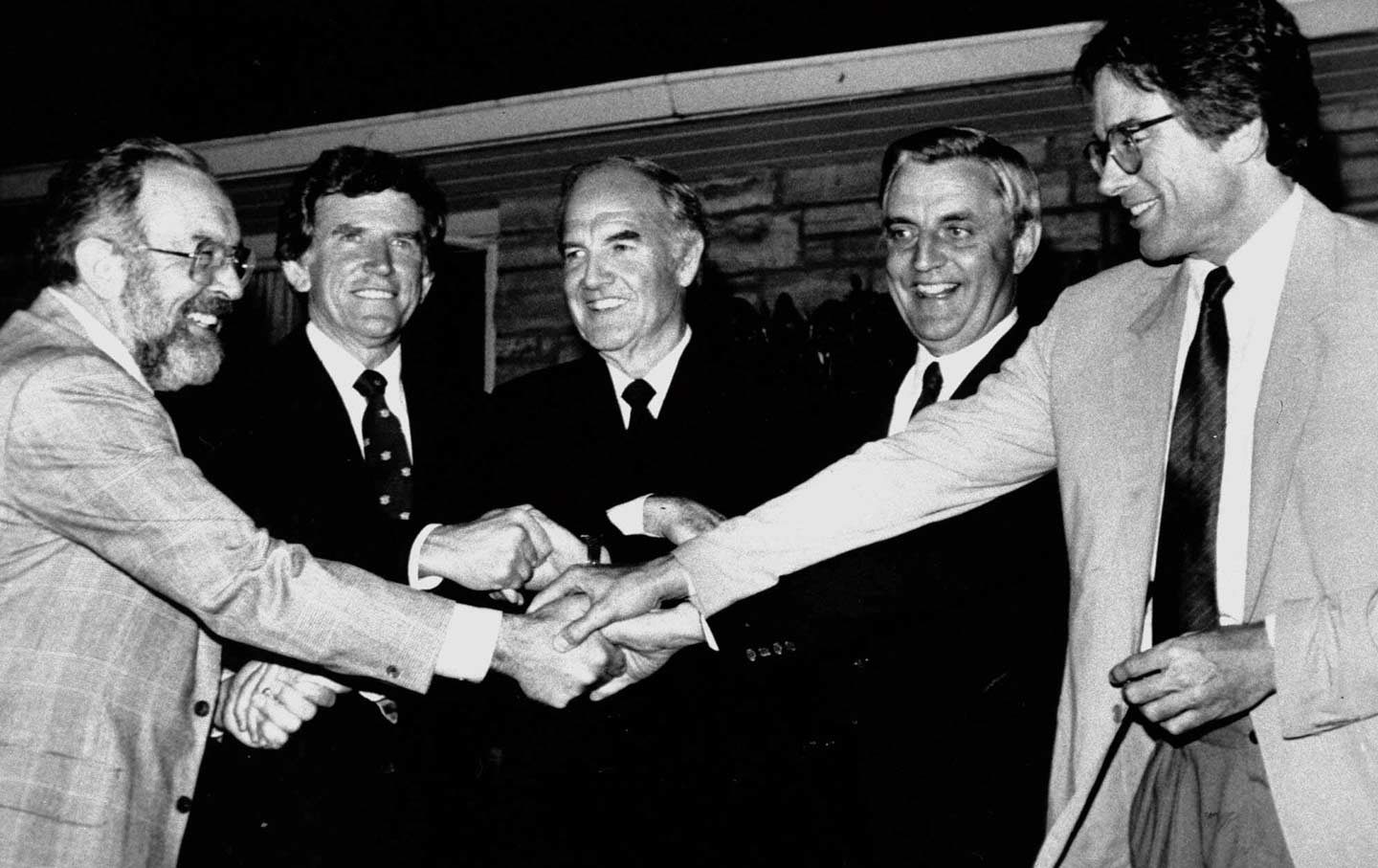 Question: What do persuading the Greek military junta to release former prime minister Andreas Papandreou; defending (and raising funds to protect) Daniel Ellsberg after he was accused of leaking the Pentagon Papers to various newspaper outlets; persuading Yassir Arafat, chairman of the Palestine Liberation Organization, to recognize Israel and disavow terrorism; exposing the CIA’s use of an American university as a front to help prop up a corrupt regime in South Vietnam; helping Norman Lear organize People for the American Way; and assisting and helping to make possible countless other liberal and free speech organizations (not to mention The Nation magazine itself!) have in common?

Answer: At the heart of each of these courageous actions was Stanley Sheinbaum, who died last week at age 96. Stanley mumbled, but his voice on behalf of peace, liberty, economic and social justice, human and civil rights and liberties, was loud and clear.

In 1978 when Hamilton Fish and I arrived at The Nation as publisher and editor, we had a problem: a sizeable annual deficit and insufficient cash to cover it while we did our best to grow the magazine towards self-sufficiency. Our solution: to find a small group of 100 shareholders, each of whom would commit to investing $5,000 per year for three years, despite the fact that as limited partners they would have no say in the day-to-day editorial and business operations of the magazine.

Stanley, along with the full support of his wife, Betty Warner Sheinbaum, was among the first to join the partnership. Beyond that, as he and Betty were to do for so many others, they assembled scores of potential investors from among their well-heeled Los Angeles friends and neighbors in their Westwood home, to hear and enthusiastically endorse our pitch.

I had met Stanley in 1959 when I was a speechwriter for Michigan’s Governor G. Mennen (“Soapy)” Williams; Stanley was on the economics faculty at Michigan State, but I knew him as my secretary’s (and his first wife, Lynne’s) chauffeur, who would drive her to work and pick up at the end of each day. He always had the smartest observation on the political events of the previous day.

His next stop was the Robert Hutchins Center for the Study of Democratic Institutions in Santa Barbara, California, where along with his assistant, Richard Parker, now of The Nation’s editorial board, and one of The Nation’s other loyalists—W.H. (“Ping”) Ferry—Stanley helped demonstrate that a daily dialogue could be the ideal preparation for his life as a citizen-activist. The rest is history and/or the behind-the scenes making of history.

But it wasn’t until Bob Scheer contacted him on behalf of Ramparts magazine that Stanley took a small pamphlet he had written at the center, and went public on how he discovered that the CIA was behind the Michigan State program he directed in Vietnam. His foresight, care, and courage in breaking that story and the precision and accompanying message about how it undermined our democracy, was to change Stanley’s life as well as the country he cared so much about.

In the course of his unique role as an often invisible agent of change, Stanley accumulated more than his share of friends, not least of whom was his old buddy Al Ruben, the award-winning television writer who in Stanley’s early years also served at the far left of his conscience; later, he was at the heart, along with Lear, Harold Willens, and others of what became known as “the Malibu mafia,” a relatively radical funding and fundraising caucus on behalf of all good things, which met as often as not, in the Sheinbaum living room.

The Nation was lucky to count Stanley among its friends, but so was humankind itself.