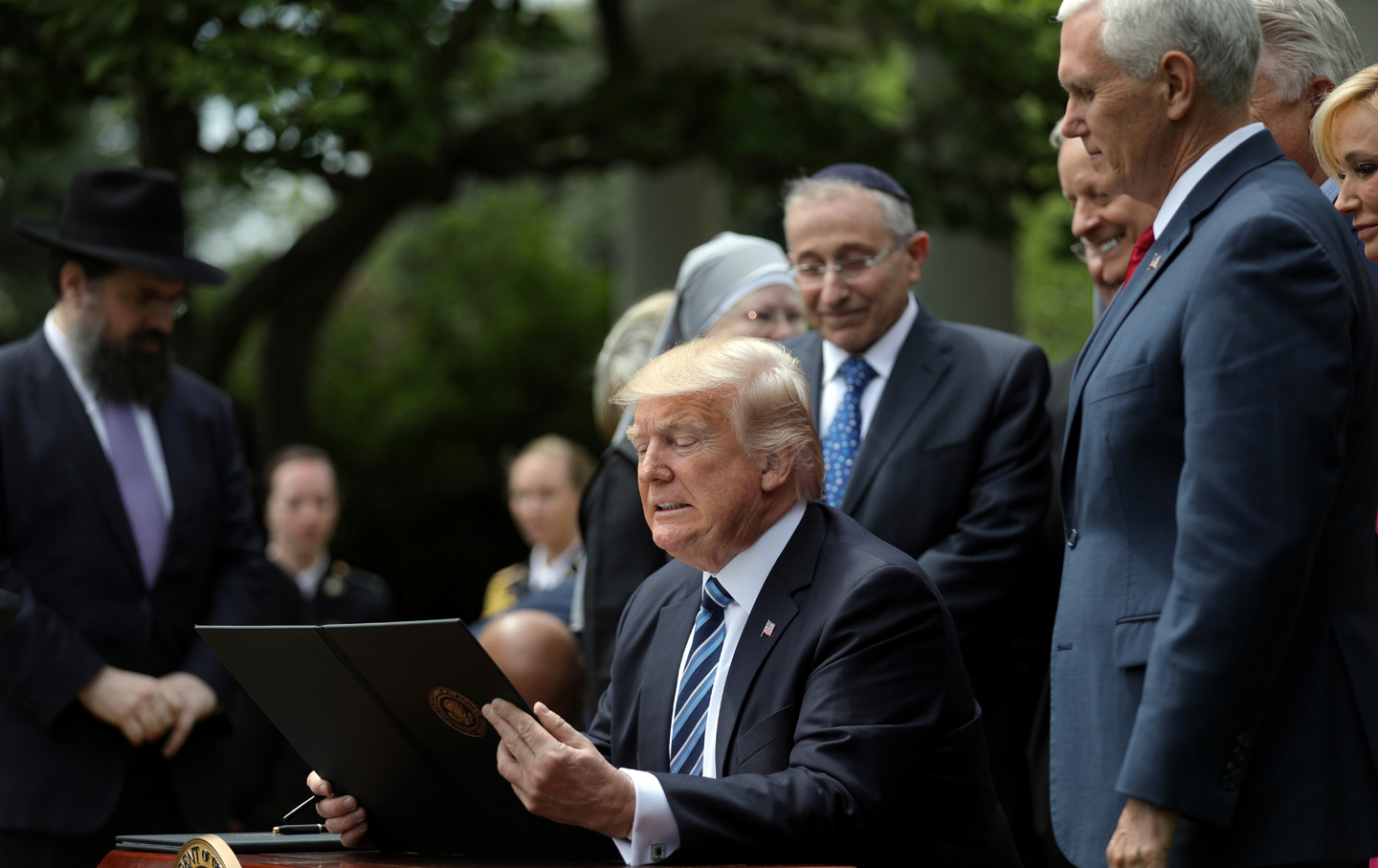 Yesterday morning, in a Rose Garden ceremony commemorating the National Day of Prayer, President Trump, flanked by conservative religious leaders, signed an executive order, “Promoting Free Speech and Religious Liberty.” While the order is a much more modest version of the draft leaked to the Investigative Fund and The Nation in February, it contains two specific provisions that have alarmed progressive activists, and one expansive but vague provision that empowers Attorney General Jeff Sessions to interpret federal law for agencies on matters of religious freedom.

With his longtime friend the prosperity televangelist Paula White standing behind him clapping and nodding, Trump claimed that “For too long, the federal government has used the power of the state as a weapon against people of faith, bullying and even punishing Americans for following their religious beliefs.”

At the heart of Trump’s action yesterday is a quid pro quo with the religious-right base that helped propel him to victory in November. While Trump had shown no interest in religious issues for most of his career, he began to court the religious right for his presidential run in 2016, developing a newfound interest in one of their key animating issues: that the strong arm of the government, particularly under Democrats, represses the free-speech and religious-freedom rights of social conservatives.

“We will never, ever stand for religious discrimination, never ever,” Trump insisted yesterday, even though one of the first executive orders he signed—his Muslim ban—has been put on hold by multiple federal courts for precisely that reason.

Notably, White had been the subject of a 2007 Senate Finance Committee investigation—led by Republican Senator Charles Grassley—into whether televangelists had used tax-exempt donations for self-enrichment. After an outcry by the religious right claiming undue government interference into religious affairs, the Committee backed off the investigation.

Yesterday’s order, though, zeroed in on two issues: the Johnson Amendment, which prevents tax-exempt organizations from endorsing candidates, and the contraception coverage requirement in the Affordable Care Act. The religious right has long portrayed the Johnson Amendment as suppressing the free-speech and religious-freedom rights of pastors. In fact, they are free to say what they please, but if they endorse a political candidate, they risk revocation of their tax-exempt status.

The contraception-benefit rule, which requires employer health plans to provide co-pay-free coverage, already exempted churches and provided accommodations for religious nonprofits. But despite these modifications, the religious right has nonetheless continued to portray the provision as even more evidence of government repression of religious groups that oppose contraception. At yesterday’s signing ceremony, Trump highlighted the order of Catholic nuns Little Sisters of the Poor, who have sued over the rule, claiming that his order would end “the attacks on your religious liberty” and assuring them that their “long ordeal will soon be over.”

Yet yesterday’s order is far narrower than expected, particularly compared to the leaked draft that was circulating in federal agencies shortly after Trump took office. That draft, which legal experts derided as “blunderbuss” and “staggering,” sought to legalize discrimination by creating wide-ranging religious exemptions permitting government employees, government contractors and grantees, for-profit and nonprofit organizations, and others to decline to do business with someone based on their sexual orientation, gender identity, marital status, or even on the grounds that they had premarital sex or an abortion.

When the leaked draft became public, conservative activists were elated that it was under consideration and began actively pushing Trump to sign it. Leading conservatives, under the banner of the influential Council for National Policy, wrote to Trump in March, calling on him to sign an executive order to protect people “punished by the government for their religious beliefs or are about to suffer under Obama era anti-religious regulations.” Fifty-two members of the House and 18 Senators also urged him to sign it. For three months, conservative hopes were kept alive by signals from the Trump administration that plans for a religious-freedom executive order were still underway, including as recently as this week, when Politico reported that Trump was expected to sign a “very, very strong” version similar to the leaked draft.

While yesterday’s order does not specifically single out sexual orientation, gender identity, or marital status as grounds for discrimination as the draft once did, it still contains a sweeping provision that could be used to that effect. “In order to guide all agencies in complying with relevant Federal law,” it reads, “the Attorney General shall, as appropriate, issue guidance interpreting religious liberty protections in Federal law.” According to White House spokesperson Sarah Huckabee Sanders, “it directs all federal agencies and departments to protect religious liberty and free speech, consistent with guidance to be issued by the Department of Justice.”

Still, religious conservatives are divided over whether Trump is in fact their savior. Leading religious right figures on his faith advisory board were tweeting celebratory photos from a Wednesday-night dinner Trump hosted for them at the White House. Ralph Reed, chairman of the Faith and Freedom Coalition and the head of that board, praised Trump for “bold leadership,” although he admitted the executive order is “just the first bite at the apple,” and called on Congress to repeal the Johnson Amendment and the ”Obamacare mandates.”

But others are lashing out. David French, a senior writer at National Review, called the order “worse than useless.” Ryan Anderson, a senior research fellow and a leading figure on these issues at the conservative Heritage Foundation, deemed it “woefully inadequate.” In contrast, the leaked February draft, Anderson wrote, “made good on many of the president’s promises to protect religious liberty from government penalties.”

Robert George, the Princeton professor who has been at the forefront for the right on these issues for years, was even more blunt. In a tweet, he called the order “meaningless,” adding that it was “a betrayal. Ivanka and Jared won. We lost.” Adding to the perception that the president’s daughter played a role in scaling back the extensive provisions was New York Times columnist Ross Douthat, who tweeted that religious leaders he knew “literally never” mentioned the Johnson Amendment, adding sardonically, “I guess good news is that when the ACLU shuts down Catholic hospitals in 15 yrs, priests will be free to endorse Ivanka from the pulpit.”

The religious right’s claims of religious persecution date back at least to the 1970s, when the Internal Revenue Service revoked the tax-exempt status of Bob Jones University, a Christian fundamentalist school in South Carolina, over its campus ban on interracial dating. Even yesterday, religious conservatives point to the Bob Jones case as evidence of government overreach, and of the risks of losing one’s tax-exempt status if the government, in their view, disapproves of a religious teaching.

At the National Religious Broadcasters convention this year, Anderson raised that very comparison. Citing the Bob Jones case, he asked, “could the IRS, under a President Hillary Clinton, for example, revoke the nonprofit tax status of a Christian school because they teach marriage is a union of a man and a woman,” he asked. “Could they revoke the license from a Christian radio station, so you wouldn’t be eligible to broadcast Christian messages over the airwaves, because they’re discriminatory, they’re homophobic or transphobic?”

But Trump’s vague directive to the IRS to not enforce the Johnson Amendment—the provision of the Internal Revenue Code that prohibits the use of tax-exempt resources to endorse political candidates—will have little practical effect. The IRS has not actively enforced the provision, which authorizes the agency to investigate and potentially revoke the tax-exempt status of an organization that violates the rule. To repeal the provision—something Trump has repeatedly promised to do—would require an act of Congress.

While legislation has been introduced multiple times by North Carolina Republican Walter Jones to do just that—and just yesterday the House Committee on Oversight and Government Reform held a hearing on the topic—a possible repeal of the amendment is unpopular, even among white evangelicals.

Trump’s effort to alter the contraception benefit similarly cannot be accomplished by executive order and would require rule-making. Such a rule, said, Ira Lupu,  a professor emeritus at the George Washington University Law School and an expert on religious freedom issues, “might be very simple—any employer, profit or nonprofit, will be able to opt out of this coverage on religious or moral grounds and no one will be obliged to fill the gap for the affected women.” Health and Human Services Secretary Tom Price is already welcoming the opportunity, saying yesterday, “We will be taking action in short order to follow the President’s instruction to safeguard the deeply held religious beliefs of Americans who provide health insurance to their employees.”

In the end, the order seems to be long on aspirations but short on specifics. Nonetheless, given the intensity of religious right dedication to these issues, and Trump’s clear dependence on their support, the order is not likely to put any of it—the Johnson Amendment, the contraception coverage benefit, or any other religious exemptions for opponents of LGBT and reproductive rights—to rest.