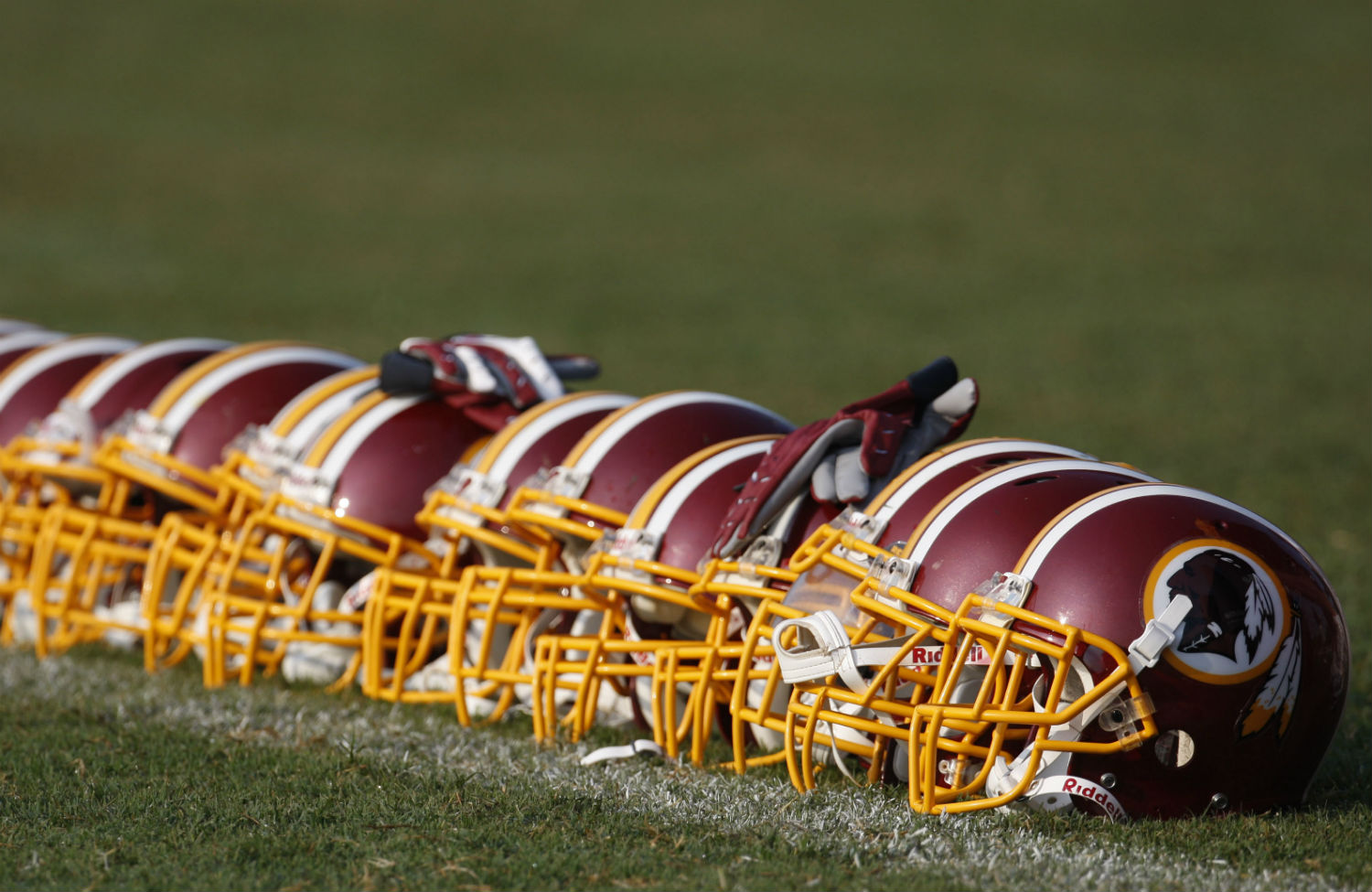 Washington Red*kins helmets displaying the emblematic colors and team mascot.  Recent debate over the racist connotations behind the team’s name has lead to increasing pressures on the NFL and the team's owners to make a change. (AP Photo/Pablo Martinez Monsivais)

This was on display last night when Dan Snyder, owner of the Washington Redskins and under fire for profiting off a dictionary-defined racist name, used the national television cameras of ESPN to honor the Navajo Code Talkers. These were Navajo soldiers during World War II who used their language to create coded messages to be used over radio that could not be cracked by the Axis Powers. Their presence last night allowed Mike Tirico to bring up the entire “name controversy” on a terrain that made Dan Snyder look like he was honoring their heritage. Tirico also said that NFL Commissioner Roger Goodell had met with Native American leaders, which was not true. There was a meeting between the NFL and Native American leaders but Goodell did not show. Tirico also made no mention of Amanda Blackhorse, a Navajo woman who is currently leading a legal trademark challenge to get the name changed. Tirico also made no mention of the fact that the original “code talkers” were the Choctaw Nation in World War I, which for a decade has had a formal position voted upon by the tribal council to get the name changed. Instead, we were treated to the spectacle, three days before Thanksgiving, of Dan Snyder saying to America, “some of my best friends are Navajo Code Talkers!”

Make no mistake about it: wrapping yourself in World War II veterans is the last refuge of scoundrels. Just as the Republican Party during the government shutdown chose to make the World War II Memorial the great symbol of Barack Obama’s lack of patriotism and the true horrors of the government shutdown (forget about those kids not getting the cancer treatments at NIH), Dan Snyder was rushing for cover behind “the greatest generation.”

This was Dan Snyder trolling and lifting a big middle finger to the Oneida Nation, the American Indian Movement, the Choctaw Nation, the San Francisco Chronicle, Bob Costas, Cris Collinsworth, Sports Illustrated’s Peter King, USA Today’s Christine Brennan, The Washington Post’s Mike Wise, the Capital News Service located at the University of Maryland, his alma mater, Charles Krauthammer, Republican Congressman from Oklahoma Tom Cole (one of two Native Americans in Congress), the DC City Council, the thousand people who marched outside the Redskins last nationally televised game against Minnesota chanting “Little Red Sambo Has Got to Go” and everyone who is said the name is racist and belongs nowhere but the dust bin of history.

Don’t say that Dan Snyder reveres Native Americans and his honoring of the Navajo Code Talkers was a show of that respect. Seventy-eight percent of Washington football fans, according to a Survey USA poll, believe that Dan Snyder should actually sit down with the Oneida Nation and others who are protesting the name. He refuses to do so. The Smithsonian’s National Museum of the American Indian has asked him or someone from his organization to speak about the issue on numerous occasions. He refuses to return their calls. His unmistakable disrespect for Native Americans and their feelings about this issue emanate from his mouth every time he opens it.

Last night was Dan Snyder’s Thanksgiving gift to America. He told ESPN’s Adam Schefter before the game the name would never change and then hid behind World War II veterans, a profile in cowardice. It does not take a code talker to crack this particular code. Dan Snyder is on the wrong side of history, and his legacy will be more than just year after year of the lousy-to-mediocre football his stewardship has brought. His legacy will be to stand with George Preston Marshall, Tom Yawkey and Kenesaw Mountain Landis on the Mount Rushmore on sports leaders who looked at the idea of racial progress and just said no.

Dave Zirin looks at how San Jose State is resting on its laurels while racism stalks campus.