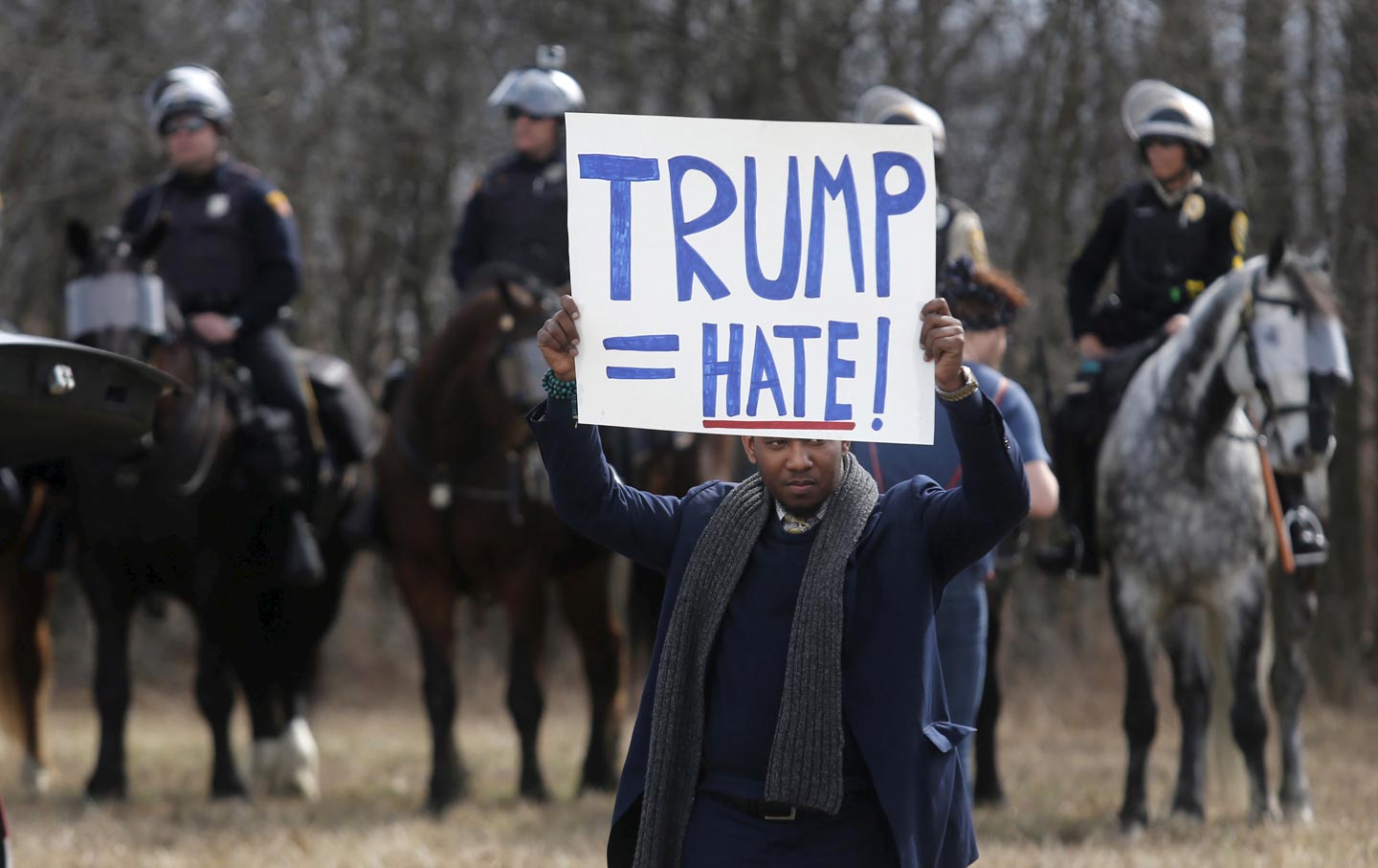 The protesters who drove Donald Trump from Chicago and confronted him at rallies elsewhere deserve nothing but praise. Embedding in Trump events may or may not make tactical sense in every case going forward, but there is no denying the moral force and necessity of confronting his racist, authoritarian demagoguery. Trump has his First Amendment right to the microphone. But when the microphone is employed to incite fistfights and pogroms, the First Amendment leaves ample room for interruption, shouting back, and nonviolent civil disobedience.

The students and activists who risk assault and arrest to protest Trump understand that the usual checks and balances of American politics have utterly failed to halt his alarming rise or restrain his rhetoric. The Republican Party, whose years of dog whistles handed Trump his playbook, has neither credibility nor capacity to claim the high ground. Standard-issue political journalism—fact-checking, record-scouring, hypocrisy-smashing reporting—has thus far done nothing but strengthen a candidate running against “The Media,” who stirs followers with wrestling-ring entertainment and vigilante fantasy rather than facts or dialogue. Even once-mighty Fox News can’t police its side of the street. They’ve all failed. That’s why those student protesters at the University of Illinois at Chicago were in fact the only grown-ups in the room. They are pointing out to the rest of us what it will take to put the brakes on the Trump juggernaut.

The student protesters at the University of Illinois at Chicago were in fact the only grown-ups in the room.

Trump will keep invoking nostalgia for the good old days of head-cracking, because it buys coverage when his little jar of policy slogans has otherwise long spent any reasonable news value. But there is more to it than Trump himself. Violence—actual, desired, and imagined—has been at the spasmodic heart of American politics since September 11, and Trump knows it. Over the last 15 years, we have witnessed terror attacks and waged endless war. Our government has deployed and defended torture. Our cities are riven by police killings. We live in the era of mass shootings and record-setting gun ownership, with the NRA prospering by pitching the same vigilantism now seized by Trump. Each of Trump’s riffs about violence—whether praising waterboarding, carrying out protesters on a stretcher, or bombing “the shit out of ISIS”—amplifies chords that have been the elevator music of our politics for years, so pervasive we’ve practically ceased to notice.

That—not only the punches and pepper spray of the last few days—is why we are confronting a moment of consequence and peril. On the immediate horizon, we can look forward to calls for armed self-defense from the Trump camp—particularly given his slanderous characterization of protesters, and too many commentators’ baseless default to “equal blame on both sides.” And there is every reason to expect that sooner or later aggrieved loners and minds overheated by Trump’s rhetoric will carry his politics of resentment to a murderous conclusion. We’ve seen it before, in women’s clinic shootings, the Oklahoma City bombings, and other acts of domestic terrorism.

The gravest danger is that the fists of March persuade discouraged voters to stay home in November.

The gravest danger, though, is that the fists of March persuade discouraged, disgusted voters to stay home in November. That would open Trump’s one conceivable path to the White House—a low-turnout election. With his pitchman’s intuitive grasp of psychology, Trump understands that all of us respond to the spectacle of ongoing brawls, beatings, and chaos in multiple ways. We’re fascinated (how many times did you watch that video of a Trump supporter delivering a head-blow to protester Kareem Jones?). We’re repulsed. And part of our brain just wants it all to go away. A minority of overt racists may be cheering. But most Americans are negotiating the political version of a basic biological dilemma: fight, flight, or freeze. Trump is counting on freeze, translated into more voters—especially unaffiliated, occasional, and crossover voters—turning off and staying home. He knows that the news cycle quickly adapts to a new reality, and it’s only a matter of time before the bullying, threats, and actual violence that now seem outrageous are accepted as numbing routine. That is why this is no season for bystanders. Apathy now will harden into resignation and can only breed a sense of inevitability and exhaustion in the fall.

It’s clear, in other words, that the anti-Trump protests we’ve seen this week need to broaden past mano-a-mano confrontation in the rented arenas where the candidate himself controls the real estate, to larger-scale demonstrations in the public space of streets and squares, inviting participation from across the political spectrum. It is not too late for a bipartisan time-out, a moment of shared reckoning even in a fiercely contentious election year. The window is limited but there is more at stake than isolating Trump. Once violence in electoral politics becomes a habit, it is hard to shake. Silence is not an option.