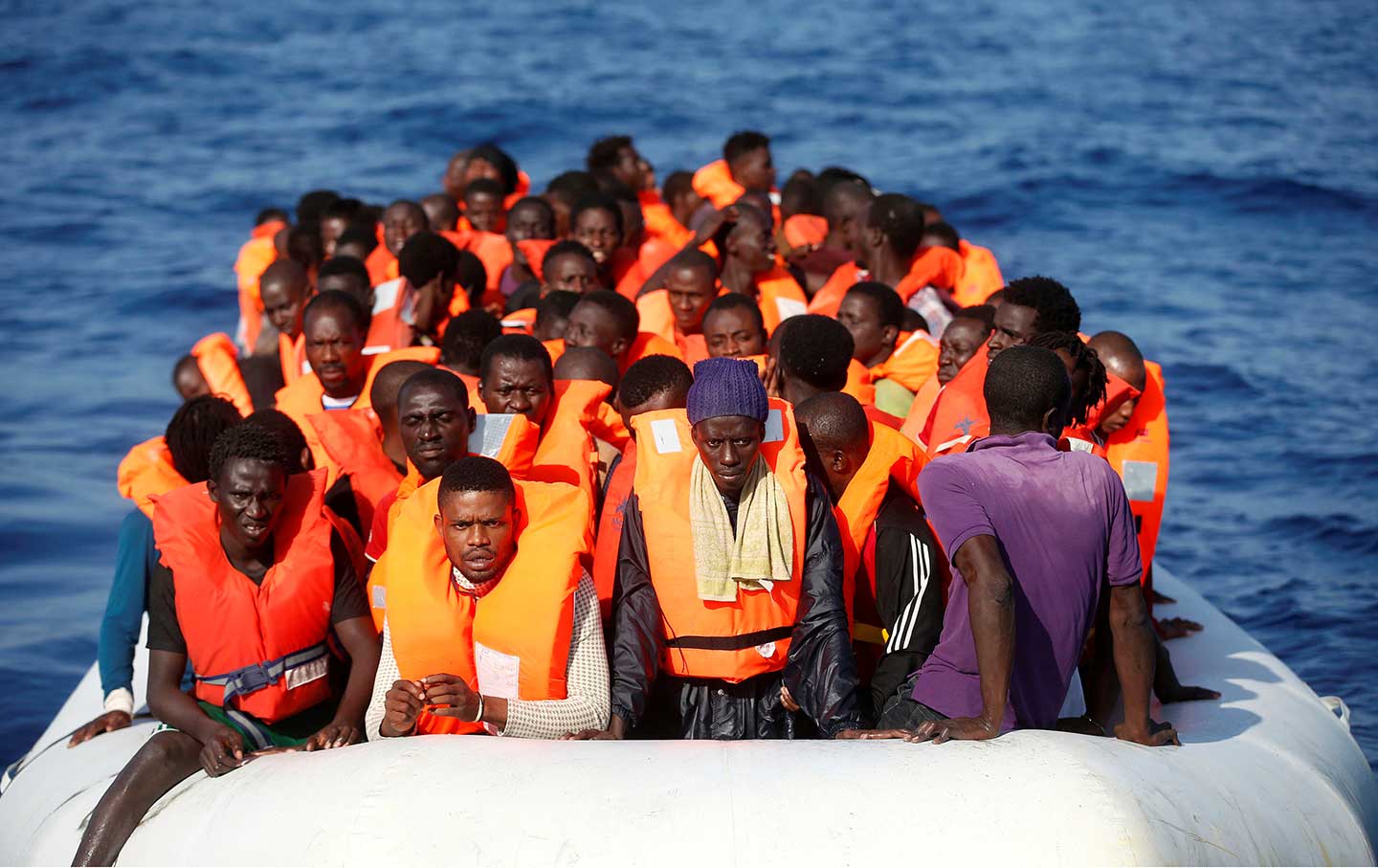 Migrants are seen during a rescue operation in the Mediterranean Sea on October 20, 2016. (Yara Nardi / Italian Red Cross press office / via Reuters)

Fortress Europe’s borders are cracking—but the slow massacre of migrants on the Mediterranean continues to be treated as a security threat instead of a humanitarian imperative. This year, record numbers of migrants may die at sea, with thousands risking their lives on smuggling routes each month, while European officials ignore their pleas for refuge and instead steer them toward further exploitation and violence.

The latest effort to “deter” migrant vessels, according to Amnesty International’s analysis, reveals Europe’s shameful attempt to flout social responsibility under the pretext of border “security.” Officials are outsourcing a maritime massacre to smugglers, ramshackle prison camps on the African coast, and the threadbare coast guard of a failed state.

Europe’s border choke point has shifted to the Mediterranean coast following the EU’s shutdown of the Greece-Turkish border as an alternative route for refugees, washing ravaged boats onto the shores of Spain and Italy. The death rate is surging as governments scramble to close, rather than open, their gates.

Compared to late 2015, the death rate on the sea routes to Spain and Italy has spiked from 0.89 percent to 2.7 percent in 2017. Most are from African countries, primarily Nigeria, Guinea, Ivory Coast, Gambia, Senegal, and Mali. While some have come seeking asylum from political persecution, others are seeking jobs and have been unable to find safe, legal pathways to European Union territory. Separated relatives often migrate to reunify with already-settled families in Europe. Desperate families are lured by smugglers, often in exchange for debt bondage. 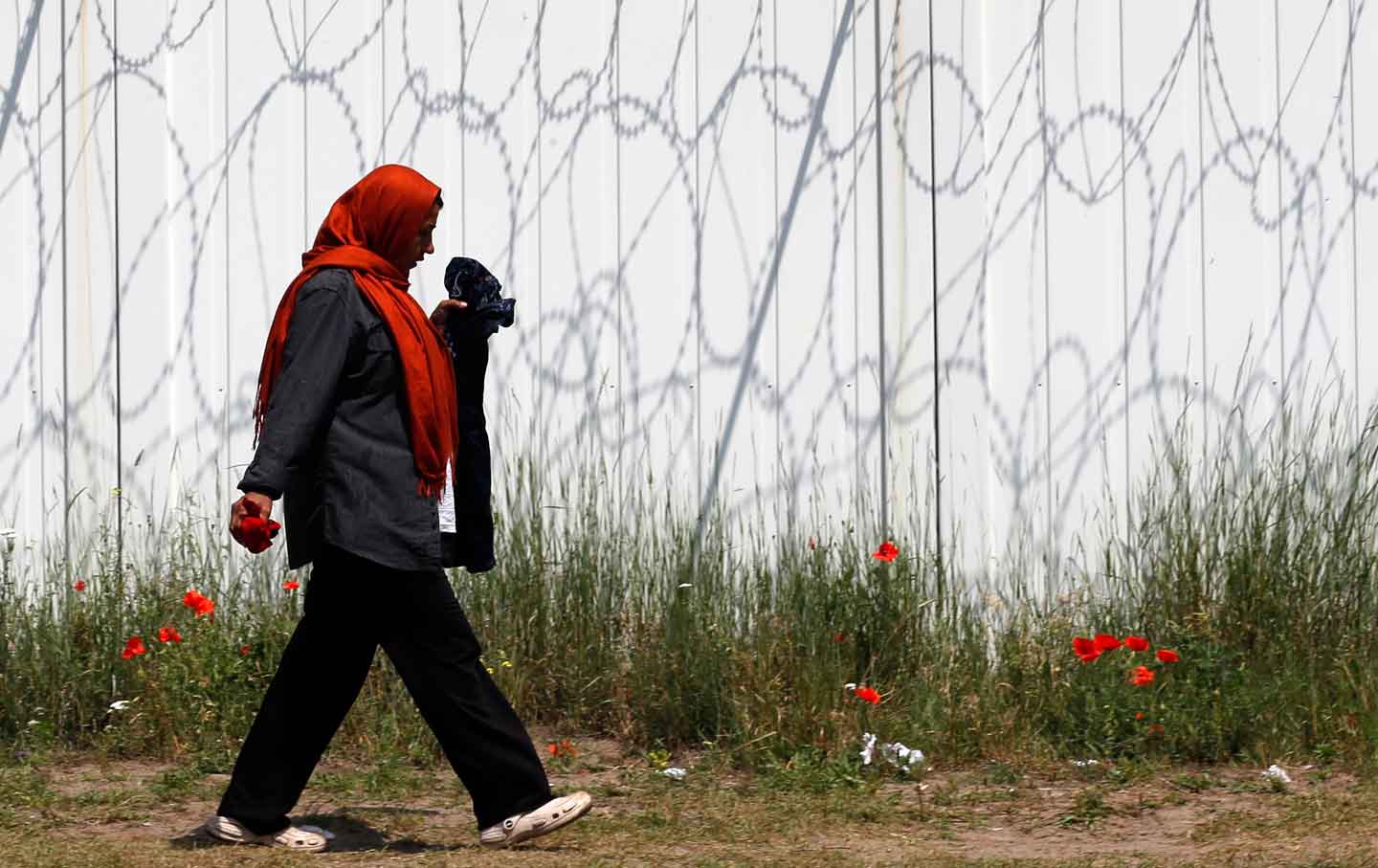 Regardless of how and why they came, Amnesty argues, everyone deserves the right to safe passage, emergency aid and shelter when they arrive, a fair legal review and opportunities to reunite with their communities.

Since January, some 2,000 people have died on the Mediterranean crossing, despite a net decrease in the number making the journey. The whole of 2016 saw nearly 190,000 arrivals and a shocking 4,581 deaths. Preoccupied with their domestic politics and partisan clashes among member states, European ministers remain deadlocked over developing a unified humanitarian response, preferring instead to erase migrant boats from their political sight line and placate right-wing constituents.

Yet migrants keep coming, because the wars and upheaval driving them from home persist. The journey often entails extreme violence, sexual assault, slave labor, or mass detention in squalid camps. Children and women are especially vulnerable to violence, exploitation, or captivity by local militias. Women are at high risk of sex and labor trafficking. Amnesty reports that the latest migrants seem to be in a more deteriorated state, scarred by starvation and assault wounds, with many “heavily pregnant” women. Smugglers are launching unseaworthy boats in multiples—creating a more dangerous burden for emergency responders: As one rescue worker described it, “Every rescue now is a tragedy waiting to happen.”

The European Union has long tried to harden borders with militarized enforcement, deportations, and detentions. But activists say what’s needed is not guns and walls but humanitarian solutions and long-term resettlement.

According to Amnesty researcher Matteo De Bellis, the EU’s Libyan strategy “focuses too heavily on border control, and too little on action to provide adequate protection and assistance to refugees and migrants,” and on the long term “will keep pushing people to put their lives in the hands of unscrupulous smugglers.”

Last year, the EU struck a controversial deal with Greece that sealed the western land and sea borders, leaving Turkey to absorb migrants into its migrant encampments, despite Turkey’s own egregious human-rights record. Amnesty says the plan is unsustainable and has failed to provide effective due process and resettlement opportunities. Meanwhile, right-wing governments have repeatedly refused to resettle refugees, often expressing anti-Muslim and racist antipathy toward the migrants. Others, like Greece and Germany, have relatively open migration policies but need neighboring government’s collaboration on resources and funding to comprehensively deal with long-term integration challenges. Sclerotic courts and bureaucracies are failing to provide due process for asylum claimants, aggravating the trauma that many refugee families arrive with.

Instead of helping other member states in solidarity, however, the EU is collaborating cynically with the Libyan coast guard, which is strengthening its border patrols to contain migrants in Libya. That might be temporarily effective at staving off migration into Southern Europe—but for all the wrong reasons.

According to Amnesty researchers, the Libyan coast guard itself poses a human-rights threat. In addition to a reputation for corruption and collusion with paramilitaries, Amnesty says,

Their operational techniques do not meet basic safety standards and can lead to panic and catastrophic capsizing. Members of the Libyan coastguard have shot guns towards boats [and the UN has] reported that they were “directly involved in the sinking of migrant boats using firearms.

One recently rescued migrant from Bangladesh gave a grim appraisal of the coast guard’s capacity:

We were 170, on a rubber boat. We were taken back to prison and we were asked for more money. They told us: “If you pay, nobody will stop you this time, because we are the coastguard.”… Libyan prisons are just hell.

Amnesty urges the EU to refrain from cooperation with Libya without first ensuring its compliance with international human-rights standards. Of course, EU ministers have little incentive to invest in such reforms, rather than just cheaply outsourcing the brutality of the migrant crisis to another country’s incompetent band of hired guns.

The Italian government has even publicly discouraged independent rescue missions, primarily those managed by private NGOs. Their logic is that “letting them in” simply encourages more to come. After a year of rescuing more than 160,000 migrants, the humanitarian NGO Mare Nostrum’s missions were halted. That spring, the Mediterranean saw two deadly shipwrecks, killing about 1,200; we’ll never know how many could have been saved had officials not blocked the so-called “pull factor” that otherwise might have thrown drowning migrants a lifeline.

The journey is growing more brutal. An “identitarian” far-right group, Defend Europe, has commissioned its own boats, supposedly seeking to assist border guards in restoring “rule of law” and shielding civilized Europe from foreign invasion. The anti-rescue mission aims to disrupt humanitarian missions and induce more death. Sadly, the vigilantism isn’t the greatest threat migrants face: The vigilantes, like Libya’s coast guards, are just doing the dirty work of EU officials. Europe’s internal social and political dysfunction has sparked an epidemic of suffering on the continent’s doorstep, while breeding toxic indifference inside its crumbling political fortress.