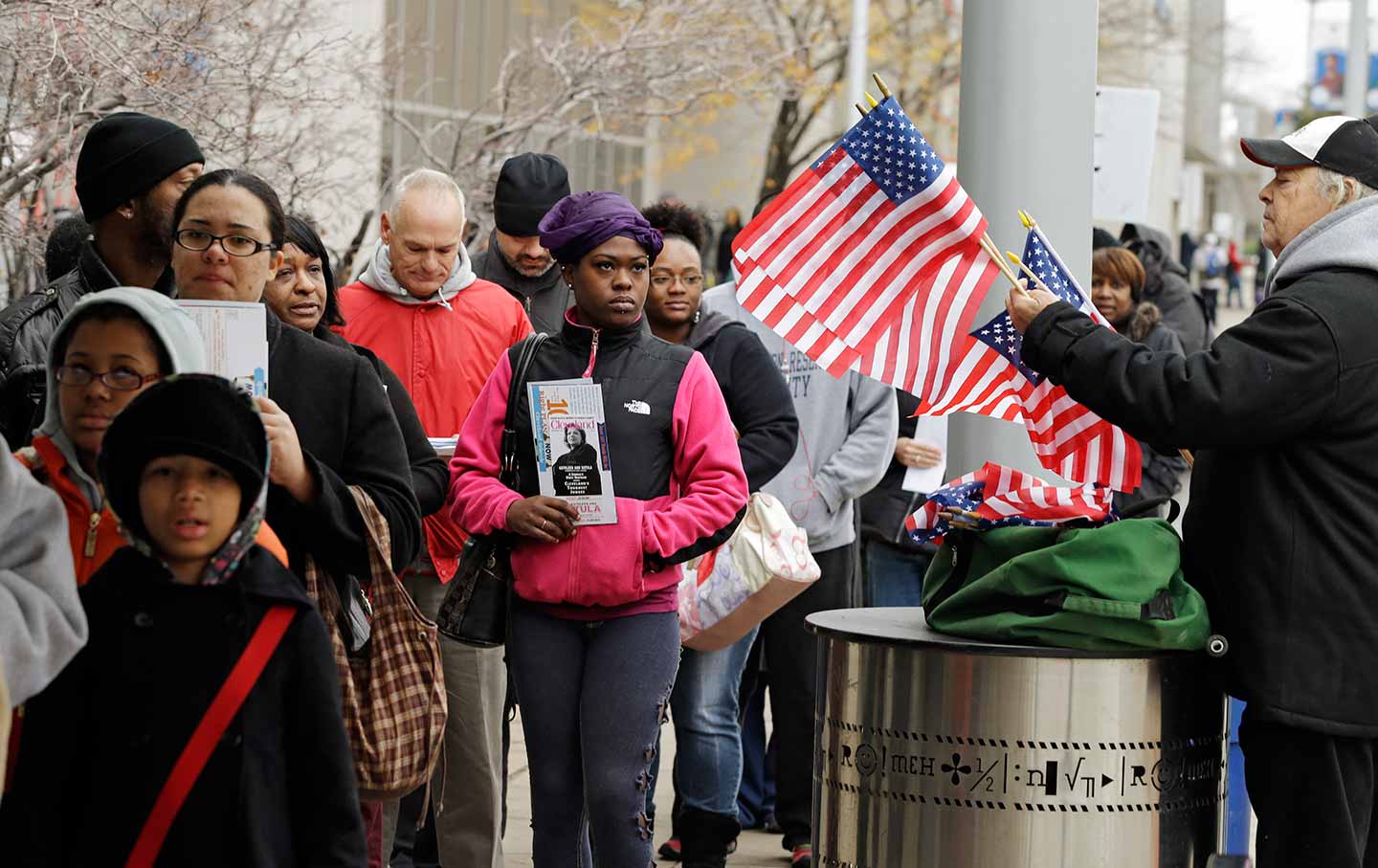 Voters wait in line outside the Cuyahoga County Board of Elections in Cleveland during early voting in November 2012. (AP Photo / Mark Duncan)

The Supreme Court today declined to overturn a ruling from the US Court of Appeals for the Sixth Circuit that upheld Ohio’s elimination of the first week of early voting in the crucial battleground state. There was no explanation for the decision or dissents.

This is a blow for voting rights, after the Supreme Court declined to reinstate new voting restrictions in North Carolina and Michigan in recent weeks. In 2012, 80,000 people voted during the first week of early voting in Ohio and 14,000 used same-day voter registration during the period known as “Golden Week.” African-Americans were five times more likely than whites to vote during Golden Week in 2012. The US District Court for the Southern District of Ohio found that cutting early voting “results in less opportunity for African Americans to participate in the political process than other voters.” (That ruling was overturned by the court of appeals.)

Ohio still has 28 days of early voting, but voters will no longer be able to register and vote on the same day during the early-voting period. Today’s decision is particularly worrisome given the news that Ohio Secretary of State Jon Husted, who defended the early-voting cuts, refused to mail absentee ballots to one in seven registered Ohio voters. Husted said that more than 1 million registered voters were either purged for “infrequent voting” because they didn’t vote in the last three elections or had moved.

Ohio’s voter purge is currently being challenged in court, with a ruling in the Sixth Circuit expected soon. At least 144,000 voters in Ohio’s three largest counties, home to Cleveland, Columbus, and Cincinnati, were purged since the 2012 election, with voters in Democratic-leaning neighborhoods twice as likely to be removed as those in Republican-leaning ones. Voting-rights advocates claim the purge violates the National Voter Registration Act.

Moreover, it seems that Husted’s non-voter list may be riddled with errors, according to the Akron Beacon Journal:

In Summit County, 36,822 registered voters will not get an absentee ballot application mailed to them. This includes 10,901 who voted in the 2008 presidential election (80 percent of whom voted Democratic in the contested primaries that year) and 123 who voted as recently as this March.

Kristina Hall, a lab courier who’s lived in Cuyahoga Falls for the past four years, can’t figure out why she’s one of them.

Hall voted in the Democratic Party primary in March. When she arrived at her polling location, she was told she was not on the list. An elections worker gave her a provisional ballot. Her vote, after everything checked out, was supposed to be used to update her address, which apparently was out of date with county election records.

It didn’t. An active voter in every presidential election in Ohio until she moved briefly to New York in 2012, Hall swears she voted in 2014 when she returned. State records show she didn’t.

The hassle has driven her to skepticism, especially since she said she’s received three notices from the board of elections to update her address and get off “confirmation status.” She said she sent all three back and has voted twice since they first arrived last year.

“I get so mad when people don’t vote,” she said. “That’s why I thought it was a problem when I’ve done everything I’m supposed to.”

Ohio has had major problems at the polls in recent elections, which is why reforms like expanded early voting and accessible absentee ballots are so important. As I reported for The Nation:

During the 2004 election, Ohio had the longest lines to vote in the country, with five-hour waits in heavily Democratic cities like Cleveland and Columbus. A post-election report for the DNC estimated that 3 percent of Ohioans—174,000 people—left their polling places without voting, a larger number than George W. Bush’s 118,000 vote margin of victory in the Buckeye State.

In response to the long waits, Ohio adopted 35 days of early voting after 2004. Early voting was widely popular and widely used during the 2008 election.

But high turnout among black voters during early voting sparked a backlash from the Ohio GOP. “I guess I really actually feel we shouldn’t contort the voting process to accommodate the urban—read African-American—voter-turnout machine,” explained Doug Priesse, the chairman of the Republican Party in Columbus, in 2012. Ohio Republicans are, sadly, still trying to make it harder to vote.