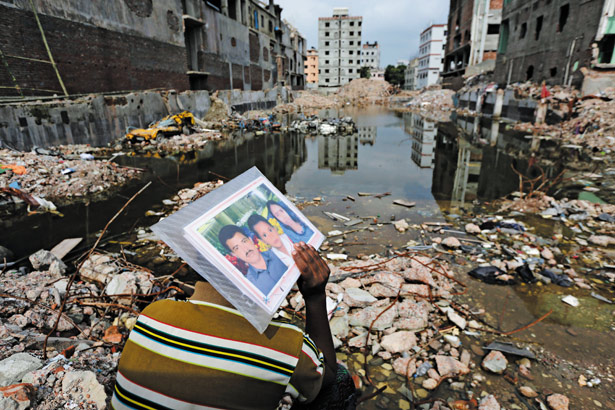 In front of the Rana Plaza site, Abdur Rahman holds a photo of his wife, Cahyna Akhter, who was killed there. (Reuters/Andrew Biraj)

On the editorial pages of The Washington Post, the White House chief of staff was trying to pump up some enthusiasm for its still-secret trade agreement among a dozen nations, the so-called Trans-Pacific Partnership. But at The New York Times, the editorial writers were getting off the team. The Times is a long-loyal advocate of free trade, but its Sunday editorial was riddled with doubts—the very same doubts critics like The Nation have been articulating for more than twenty years.

“This Time, Get Global Trade Right,” the Times suggested. Americans, it noted, are “increasingly anxious about the downside.” So is The New York Times. To get the public and Congress on board, it said “the administration must ensure that new agreements are much stronger than NAFTA and other pacts.” Done right, US trade policy “could reduce abuses like sweatshop labor, currency manipulations and the senseless destruction of forests. They could weaken protectionism against American goods and services in countries like Japan.”

Don’t hold your breath. That is not where the president is headed. Washington cynics assume Obama will find reasons to postpone a showdown on trade until after the fall elections (just as he’s done on the Keystone pipeline decision). Then the White House will try to soften up opposition among Democrats, assisted by a lot of heavy-breathing corporate lobbyists. If Republicans capture the Senate this fall, Obama can get help from the GOP.

One thing missing from Obama’s negotiating strategy is the scandal of Bangladesh. The US and European garment industries have concentrated production there to capture dirt-cheap labor and the corrupt, compliant government willing to ignore the flagrant abuses of sweatshop labor. Last year, some 1,100 people were killed there when the Rana Plaza factory in Dhaka collapsed. The Times itself seemed particularly upset. When other mass killings in southeast Asian factories had occurred during the last twenty-five years, the newspaper declined to dig deeper, framing the deaths as an unfortunate but perhaps inevitable part of global development. “Two cheers for sweatshops,” Times pundits used to say.

Only these horrendous events did not go away. They got worse. This time, to its great credit, Times reporters stayed on the story and are closely following the aftermath of controversy and reform. This week, it reported on the rivalry of two garment industry organizations over how to prevent another catastrophe. One group, the Bangladesh Accord for Fire and Building Safety, includes more than 150 companies, mainly European, and has an explicit commitment to cover the costs of creating safe and sound factory buildings. The other group, the Alliance for Bangladesh Worker Safety, is dominated by Walmart, Gap and Target, and it does not actually require the companies to fund factory improvements, according to Scott Nova, director of the Worker Rights Consortium.

The Accord, unlike the Alliance, helps workers form unions so they can do their own surveillance of working conditions. Activists with United Students Against Sweatshops are bluntly skeptical of Alliance claims. “We need to do a better job as an organization in telling our story,” an Alliance advisor said. Scott Nova simply sees the Alliance as Walmart’s artful public relations to dodge responsibility.

So who is missing from this fight? Barack Obama. If he wished to persuade skeptics of his good intentions, he could address the problems of Bangladesh’s garment industry quickly by changing US trade policy. He should be proposing new rules for importers who manufacture their products overseas. No more sweatshops or dangerous buildings where innocent workers lose their lives making clothing for Americans. The legislation could be straightforward and no more complicated than many existing laws on imports. To enter US markets, the garment importer would have to certify the the goods were not produced under sweatshop conditions. Any importer who violates the law gets a huge fine. Repeat offenders would face boycott.

In other words, the “crime” should punish the real culprits and many of them are in American retailing. Scott Nova believes the industry group called Accord is making encouraging progress. “What we really need,” he said, “is legislation that imposes fines on the companies. As long as you allow importers with impunity to import goods made in appalling conditions, you are going to get a lot of goods made in sweatshops.”