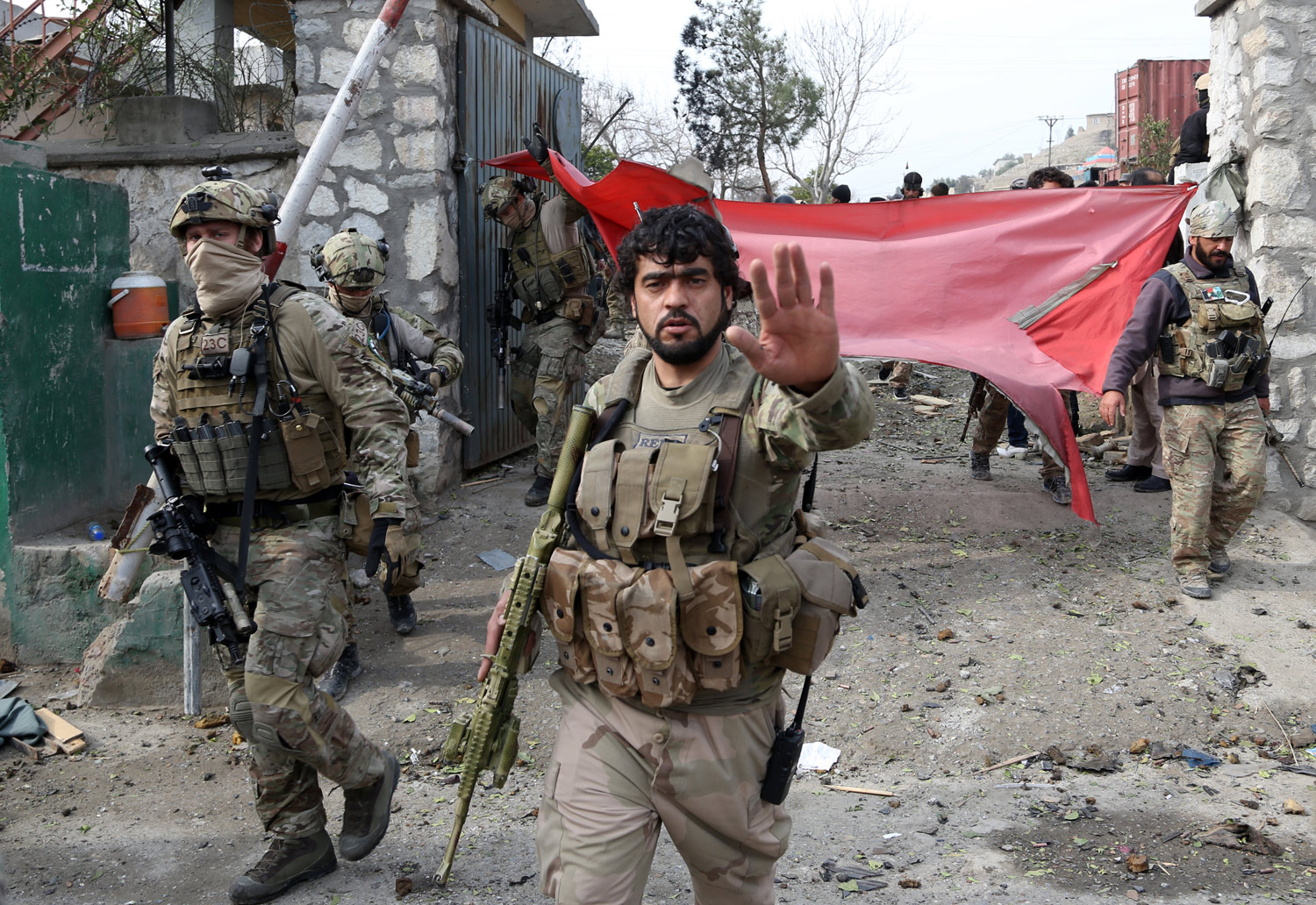 Afghan security forces members and US soldiers arrive at the site of a suicide bombing at a police compound in Kabul, Afghanistan, Friday, February 21, 2014. (AP Photo/Rahmat Gul)

President Obama spoke with Afghan President Hamid Karzai by phone on Tuesday, for the first time since late June, and finally issued a long-rumored ultimatum: the United States will prepare plans to withdraw all 37,000 US troops from the country in the event a bilateral security agreement isn’t signed.

Karzai has resisted signing that agreement, which a leaked draft indicated would keep a non-trivial US troop presence in the country (rumored to be anywhere between 7,000 and 15,000 soldiers) through “2024 and beyond.” The troops would serve in a support capacity, but would be authorized to conduct “counter-terror” operations as needed. Ultimately, Karzai punted on signing the BSA and said it would be up to his successor, who will be elected sometime this year.

Obama’s ultimatum to sign the BSA or risk a total US troop pullout comes amidst a widening debate in Washington over the war, which is now both the longest and least-popular in US history.

Even the administration is internally divided, according to reports. The Hill asserted in January that a fight was “raging” between the White House, State Department, and Department of Defense over whether to pull all US troops from Afghanistan after 2014.

The report said that the zero-option “is being advocated by some White House officials who believe the US should be spending more money at home versus abroad.” Obama’s ultimatum yesterday might indicate those voices have won at least a partial victory.

On Capitol Hill, more and more legislators are paying attention. As we’ve been reporting, a bipartisan group of senators has introduced a bill demanding Obama consult Congress before entering a new phase of the war in Afghanistan.

The bill, which so far has eight co-sponsors, has been referred to the Senate Foreign Relations Committee. A committee spokesman could not tell The Nation when, or if, it would be given a vote.

But some of the bill’s sponsors welcomed Tuesday’s news of the Obama-Karzai phone call. “I applaud President Obama’s decision to prepare for a complete withdrawal of all US troops from Afghanistan by the end of this year, and I hope he will choose this course regardless of who succeeds President Karzai in Afghanistan’s April elections,” said Senator Joe Manchin in a statement. “It is time to bring our troops home from our nation’s longest war.

Meanwhile, however, some pro-war Republicans are starting to speak up and sound familiar refrains about supposed surrender. For a long while the GOP has been loathe to discuss the war at any length—Mitt Romney barely mentioned it during the 2012 campaign—but Representative Buck McKeon, the head of the House Armed Services Committee, delivered a lengthy speech in Washington on Monday that took a stridently anti-withdrawal approach.

McKeon slammed Obama for allegedly failing to acknowledge recent victories in Afghanistan, and said that at times “the president openly campaigned against his own strategy” and “sent his political operatives out to stoke fatigue and hopelessness.”

Those are weighty charges, and McKeon came awful close to suggesting Obama is aiding the Taliban. “Counterinsurgencies have two fronts—the one out there, and the one right here,” he said. “The troops have held their line out there. The president has not held the line here.”

House Speaker John Boehner, perhaps sensing political opportunity, echoed those sentiments late Tuesday after the Obama-Karzai call and news of the zero-option ultimatum broke. “Over the last year, our commander in chief has often talked more about how we plan to leave Afghanistan than how we are going to achieve our mission,” Boehner said.

The increasing pressure from Republicans for Obama to stay is notable, though may end up being moot. If Karzai’s successor won’t sign a BSA, then the zero-option will almost surely be executed. If Afghanistan is willing to sign it, however, Washington still appears deeply divided on what to do. Meanwhile, the casualties continue to pile up. Far from Washington on Monday, an Oregon family held a quiet funeral for a 22-year-old Army specialist who died from small arms fire in Kapisa Province, Afghanistan, earlier this month.