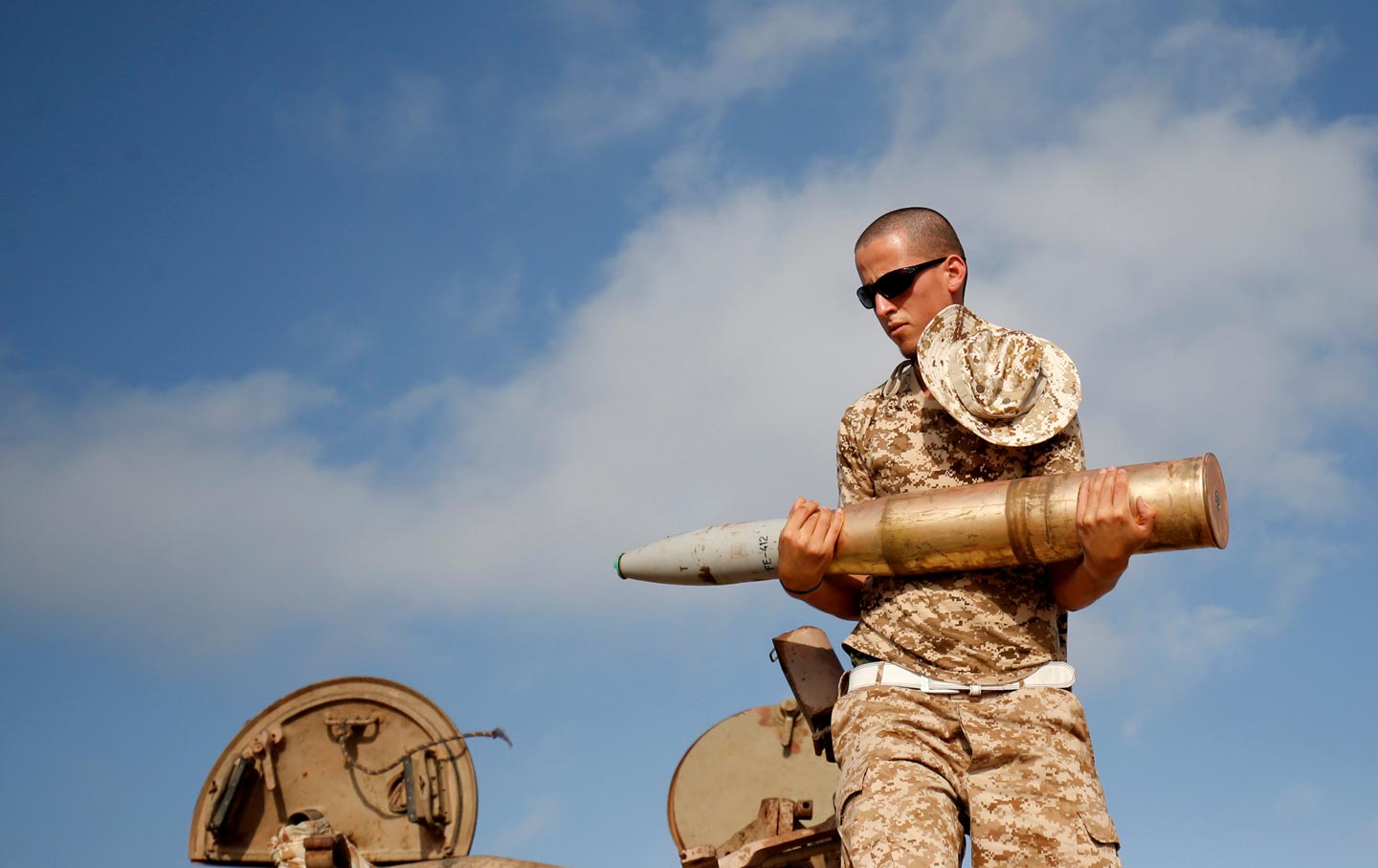 A fighter allied with the UN-backed Libyan government carries a shell on top of a tank in Sirte, where government forces are besieging an ISIS stronghold. (Reuters / Goran Tomasevic)

The Obama administration announced on Monday the beginning of US air strikes in Libya against ISIS targets, marking the fourth country the United States is currently bombing with the goal of “degrading and destroying” the terror group. A campaign that began two years ago this Sunday has now, 50,000 bombs and 25,000 dead ISIS fighters later, expanded to a whole new continent.

You’d hardly notice, however, if you followed US media. While the air strikes themselves were reported by most major outlets, they were done so in a matter-of-fact way, and only graced the front pages of major American newspapers for one day. The New York Times didn’t even find the news important enough to give it a front-page headline, instead relegating it to a quick blurb at the far-bottom corner of the page, next to a teaser about the G train “having a moment.”

Even many center-left outlets barely touched on the massive mission creep. To give some perspective, Slate, Mother Jones, and Buzzfeed News all ran more stories about Trump’s dust-up with an infant than they did on what was effectively the start of a new war. ABC World News Tonight mentioned the Libyan air strikes for only 20 seconds, 13 minutes into the show, and NBC Nightly News didn’t mention the air strikes at all. The president’s announcement that the United States is bombing a new country has become entirely banal.

This is by design. Obama’s “frog in boiling water” approach to war removes a clear deadline, thus stripping his use of military force of the urgency of, say, Bush’s “48 hours to get out of Baghdad” Gary Cooper approach.

Meanwhile, an anti-ISIS bombing campaign that began as “limited,” “targeted” air strikes in Iraq two years ago expanded to Syria six weeks later, to Afghanistan in January of this year, and to Libya this week. Combat troops and special forces have also crept into play, with US military personnel first appearing in Iraq and Syria in 2014, 2015, or 2016, depending on how one defines “boots” and “ground.”

News outlets report each expansion as if it were obvious and inevitable.

All of this has unfolded with US media that almost never put these developments in a broader context. Instead, news outlets report each expansion as if it were obvious and inevitable. The war just is, and because it’s done piecemeal, there doesn’t seem much to get outraged over.

The question pundits should be asking themselves is this: Had Obama announced on August 7, 2014, that he planned on bombing four countries and deploying troops to two of them to fight a war with “no end point,” would the American public have gone along with it? Probably not.

To authorize his perma-campaign, Obama’s administration has dubiously invoked the 15-year-old, one-page Authorization for Use of Military Force, passed three days after 9/11. The president has to do this, the White House and friendly media claim, because Congress “refuses” to act  to authorize the war (notice that’s a rubber-stamp question of when, not if). But such apologism largely rests on a tautology: Congress doesn’t have a sense of urgency to authorize the war because the public doesn’t, and the public doesn’t because the media have yawned with each new iteration.

What’s lacking is what screenwriters call “an inciting incident.” There’s no clear-cut moment the war is launched, it just gradually expands, and because media are driven by Hollywood narratives, they are victims to the absence of a clear first act. This was, to a lesser extent, the problem with the last bombing of Libya, in 2011. What was pitched to the American public then was a limited, UN-mandated no-fly zone to protect civilians (that even the likes of Noam Chomsky backed), which quickly morphed, unceremoniously, into all-out, NATO-led regime change three weeks later.

Then, as now, there was no public debate, no media coming-to-Jesus moment. Obama just asserted the escalation as the obvious next step, and almost everyone just sort of went along—an ethos summed up in Eric Posner’s hot take at Slate the day after Obama expanded the ISIS war to Syria: “Obama Can Bomb Pretty Much Anything He Wants To.”

Some, such as The Week’s Ryan Cooper and The Atlantic’s Conor Friedersdorf, have argued that the specter of a Donald Trump presidency could provide this inciting incident, that the fear of an apparently mentally unstable reality-show host taking over this sprawling, limitless war could compel us to examine the wisdom of this unilateral executive approach. But, thus far, this fear has done no such thing.

Obama’s mission creep, without public debate or congressional sanction, goes on without examination of what it may entail for future presidents, let alone the present one. This is the new normal, and it’s a new normal the press codifies every time it treats Obama’s ever-expanding war as dull and barely newsworthy.