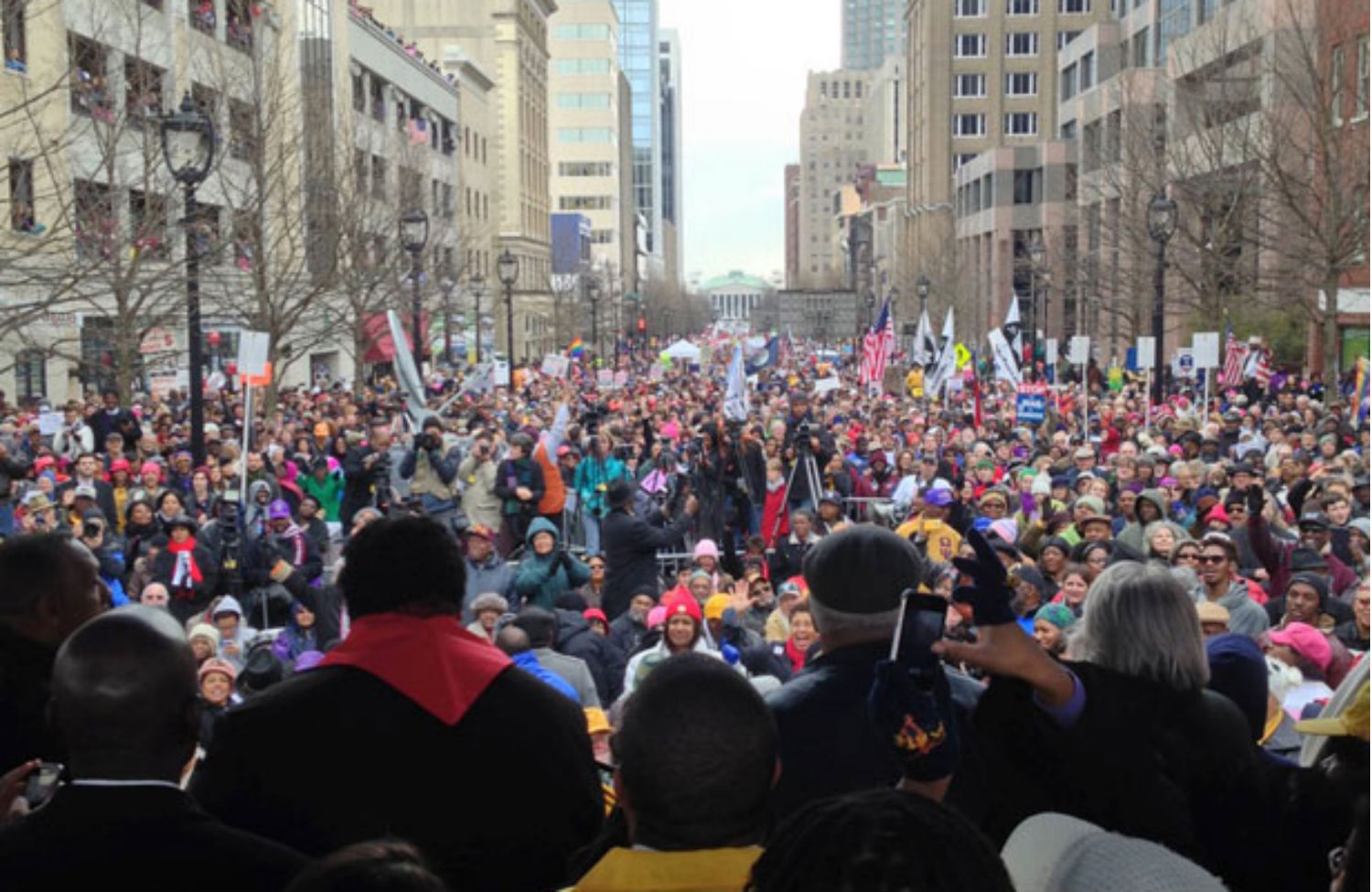 The stage at the inaugural 2014 Moral Mondays protest in Raleigh, North Carolina. Photo by Ari Berman.

On February 1, 1960, four black students at North Carolina A&T kicked off the 1960s civil rights movement by trying to eat at a segregated lunch counter at Woolworth’s in downtown Greensboro. Two months later, young activists founded the Student Nonviolent Coordinating Committee  at Shaw University in Raleigh, which would transform the South through sit-ins, Freedom Rides and voter registration drives.

So it was fitting that North Carolina’s Moral Monday movement held a massive “Moral March” in Raleigh today which began at Shaw University, exactly fifty-four years after North Carolina’s trailblazing role in the civil rights movement. Tens of thousands of activists—from all backgrounds, races and causes—marched from Shaw to the North Carolina State Capitol, where they held an exuberant rally protesting the right-wing policies of the North Carolina government and commemorating the eighth anniversary of the HKonJ coalition (the acronym stands for Historic Thousands on Jones Street, where the NC legislature sits).

The day began cold and cloudy, a fitting metaphor for politics in North Carolina last year. Since taking over the legislature in 2010 and the governor’s mansion in 2012, controlling state government for the first time in over a century, North Carolina Republicans eliminated the earned-income tax credit for 900,000 North Carolinians; refused Medicaid coverage for 500,000; ended federal unemployment benefits for 170,000; cut pre-K for 30,000 kids while shifting $90 million from public education to voucher schools; slashed taxes for the top 5 percent while raising taxes on the bottom 95 percent; axed public financing of judicial races; prohibited death row inmates from challenging racially discriminatory verdicts; passed one of the country’s most draconian anti-choice laws; and enacted the country’s worst voter suppression law, which mandates strict voter ID, cuts early voting and eliminates same-day registration, among other things.

The fierce reaction against these policies led to the Moral Monday movement, when nearly 1,000 activists were arrested for nonviolent civil disobedience inside the North Carolina General Assembly. Rallies were held in more than thirty cities across the state and the approval ratings of North Carolina Republicans fell into the toilet. Sample signs at today’s rally: “OMG, GOP, WTF. It’s 2014, not 1954!!!” “Welcome to North Carolina. Turn Your Watch Back 50 Years!” (See my Twitter feed for photos of the rally.)

The Moral Monday protests transformed North Carolina politics in 2013, building a multiracial, multi-issue movement centered around social justice such as the South hadn’t seen since the 1960s. “We have come to say to the extremists, who ignore the common good and have chosen the low road, your actions have worked in reverse,” said Reverend William Barber II, president of the North Carolina NAACP and the leader of the Moral Monday movement, in his boisterous keynote speech. “You may have thought you were going to discourage us, but instead you have encouraged us. The more you push us back, the more we will fight to go forward. The more you try to oppress us, the more you will inspire us.”

If today’s rally was any indication, the Moral Monday movement will be bigger and broader in 2014. An estimated 15,000 activists attended the HKonJ rally last year, bringing thirty buses; this year, the NC NAACP estimated that 80,000 to 100,000 people rallied in Raleigh, with 100 buses converging from all over the state and country. It was the largest civil rights rally in the South since tens of thousands of voting rights activists marched from Selma to Montgomery in support of the Voting Rights Act.

“This Moral March inaugurates a fresh year of grassroots empowerment, voter education, litigation and non-violent direct action,” Barber said. There will be a new wave of direct action protests when the North Carolina legislature returns in the spring, a new wave of activists doing voter mobilization and registration during the “Freedom Summer 2014,” and litigation challenging North Carolina’s voter suppression bill. The movement will be active in the streets, in the courtroom and at the ballot box. They will be focused not just on changing minds, but on changing outcomes.

To that end, the HKonJ coalition called for five demands:

• Stand up for the health of every North Carolinian by promoting health care access and environmental justice across all the state's communities;

• Address the continuing inequalities in the criminal justice system and ensure equality under the law for every person, regardless of race, class, creed, documentation or sexual preference;

• Protect and expand voting rights for people of color, women, immigrants, the elderly and students to safeguard fair democratic representation.

Barber has frequently called North Carolina “a state fight with national implications,” and that message has started to break through nationally. Moral Monday spinoffs have begun in Georgia and South Carolina, and national progressive leaders like Randi Weingarten of the American Federation of Teachers traveled to Raleigh to lend their support today. “This is a movement, not a moment” is a frequent refrain among Moral Monday activists. “This was just the beginning,” Barber said after the rally. “We did not come all this way just to go home.” Barber just wrapped up a sixteen-city tour of the state last week. He’ll hit the road again next week.

By the end of the rally, the sun had finally come out. “Even the universe is blessing us,” Barber said.