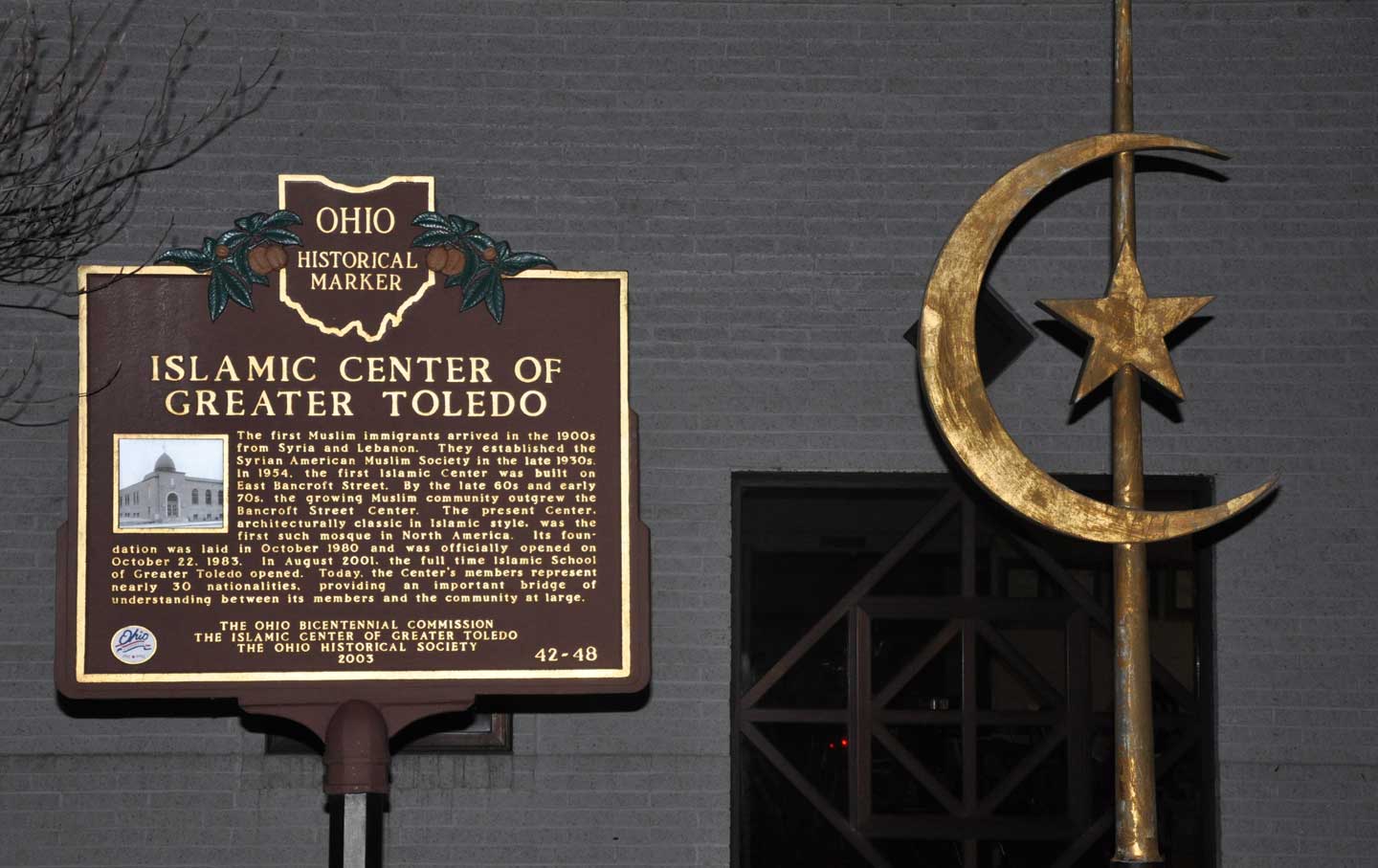 A sign and crescent and star at the Islamic Center of Greater Toledo in Ohio. (Photo by Pamela Fink, CC BY 2.0)

Out in northwest North Dakota, where the winds hit heavy on the borderline, rural Mountrail County backed Donald Trump, as did all but two of North Dakota’s 53 counties. And the city of Ross, population 97, voted a bit more heavily for Trump than the rest of the county and the rest of the state.

That’s notable because of the place Ross holds in the history of Islam in America.

It was in this farm town that in 1929 the first mosque purposely constructed as such in the United States was established. The Muslim immigrants who settled around Ross to farm in the early years of the 20th century would eventually be buried nearby. Their children and grandchildren have for the most part moved on. But the mosque, now reconstructed and sitting peacefully along a country road, can be found just beyond a simple fence featuring a star and crescent.

Before Donald Trump was born, mosques were being built in rural North Dakota and Iowa. Islam is an American religion.

I doubt that Donald Trump knows there is a Ross, North Dakota, let alone that Muslim immigrants constructed a mosque there before he was born. I doubt that his aides know that Muslims were living and worshiping in the United States before the founders drafted a Constitution that guarded against religious tests and then added an amendment designed to preserve freedom of religion in a country where Thomas Jefferson believed that a mantle of protection should extend to “the Jew and the Gentile, the Christian and Mahometan, the Hindoo, and infidel of every denomination.”

But this history needs to be recalled, and respected, as President-elect Donald Trump begins to fill his administration with men like his incoming National Security Adviser, Lieutenant General Michael Flynn, who has claimed that “fear of Muslims is RATIONAL.”

Media outlets have reported that “A key member of Donald Trump’s transition team has said that the nascent Trump administration is already weighing a plan to launch a registry for immigrants and visitors from Muslim countries.” Kansas Secretary of State Kris Kobach, one of Trump’s closest advisers, gave an interview to Reuters, which led the news agency to report that “Trump’s policy advisers had also discussed drafting a proposal for his consideration to reinstate a registry for immigrants from Muslim countries.”

Kobach was not talking out of turn, or floating a new idea. During the campaign, Trump told NBC News that he was “absolutely” interested in establishing a database to register Muslims. As a candidate, Trump even proposed surveillance of houses of worship, saying, “We have to go and we have to maybe check, respectfully, the mosques.”

As a young journalist, I wrote a good deal about the rural Muslim and Jewish farm communities of the upper Midwest. I met the children and grandchildren of those Muslim farmers from the Dakotas, and from eastern Iowa, where the Mother Mosque of America was constructed in 1934 in Cedar Rapids. As a reporter for the Toledo Blade, I came to know Yehia “John” Shousher and other Muslims who built a pioneering mosque in the city’s “Little Syria” neighborhood more than six decades ago. Later, they constructed one of the great mosques in North America, the Islamic Center of Greater Toledo, at which people from dozens of countries proudly celebrate their community’s “equal and vibrant representation of women and the democratic and constitutional processes that the Center diligently follows.”

It is because I have spent so much time in these mosques, because I have for so long known them as part of the fabric of the communities where I have lived, of the rural regions I love, of an American experiment I have treasured, that I was so shaken by Donald Trump’s campaign claim that “there’s absolutely no choice” but to monitor mosques, to consider closing some of them, to begin tracking Muslims using “surveillance, including a watch list.”

It is for the same reason that so many of us were unsettled last week when Carl Higbie, a Trump surrogate, attempted to defend talk of a Muslim registry with a reference to the shameful treatment of Japanese Americans during World War II. And the convoluted response to the controversy by Reince Priebus, Trump’s pick to serve as White House chief of staff, only made things worse. Even as Priebus tried to dismiss talk of a religious tests, he spoke of targeting Muslim immigrants and announced, “Look, I’m not going to rule out anything.”

What Trump and his closest aides and allies are talking about is not public safety or responsible policing. It is broad-sweep stereotyping rooted in ignorance and cruelty.

Trump says he wants to “make America great again.” But he knows nothing of greatness. The measures of what is great and good about America are not found in the crude comments of politicians and their circles of unthinking mandarins. They are found in the mosques of Ross and Cedar Rapids and Toledo, and in the stories of the Muslim immigrants who have embraced and cherished our shared American experiment.