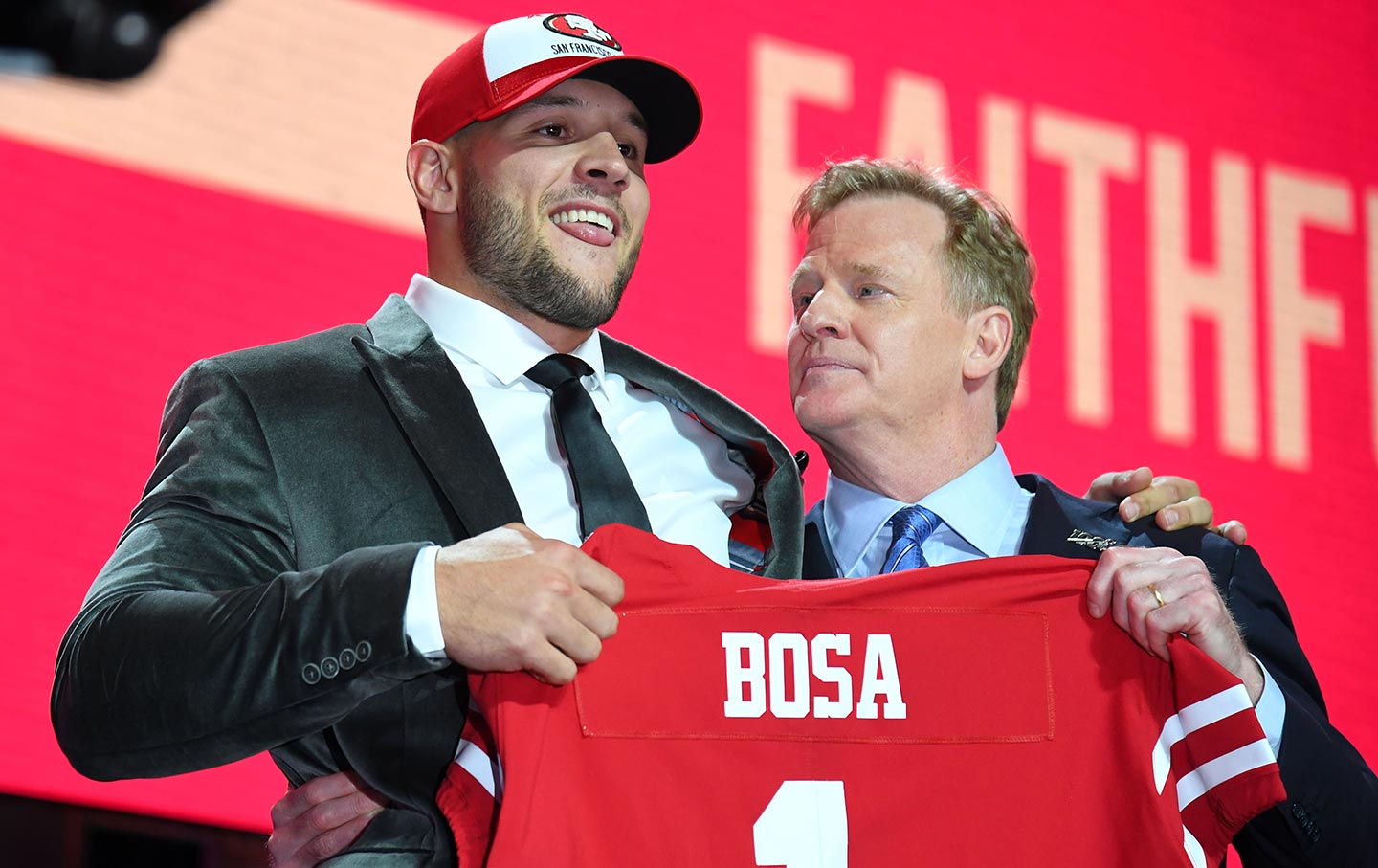 It’s been a hell of a ride for the San Francisco 49ers. Two and a half years ago, quarterback Colin Kaepernick was kneeling on the sidelines during the national anthem, raising awareness about racist police violence and enduring an avalanche of death threats casually lobbed by bigoted trolls, as well as a cavalcade of hateful, anonymous quotes from NFL executives. On Thursday, the 49ers drafted linebacker Nick Bosa with the number-two overall pick. Bosa is a Trump lover who had to scrub his social media before the draft because of his affection for white-nationalist Twitter accounts.

For NFL-franchise owners, who gave millions of dollars to Trump, Bosa’s social-media predilections weren’t a major concern. Even in San Francisco, which has a fan base who largely supported Kaepernick and represents a community that stands as allegedly one of the more progressive in the country, Bosa’s flirtations with white nationalism did not cause 49ers general manager John Lynch or owner Jed York a moment’s hesitation—even though the players gave Kaepernick their Courage Award after the 2016 season.

As for Bosa, he has attempted to explain his—now scrubbed—social-media habits away, saying, “I love the Bay Area, and I’m excited to play there. I was a little insensitive in some of the things I said [on social media]. I’ve learned a lot in the past few months. And I’m just ready to move forward in that, put it in the past and bring the Faithful some wins.”

The obvious double standards at play here are outrageous. ESPN’s resident draft expert Todd McShay said before the draft that “I don’t think it’s going to affect his draft stock. I can’t imagine—and I’ve talked to some teams—a team saying we’re gonna pass on this guy because he’s left or right wing.”

This is willful political blindness. The evidence shows that a black player who expresses anti-racist ideals will find themselves blackballed from the league, like Colin Kaepernick, or harassed and drug tested repeatedly, like Eric Reid. White players, like quarterback Josh Rosen, who have expressed anti-Trump views find their draft stock diminished and their character called into question. But being not only pro-Trump but also expressing affection for the ugliest parts of Trump’s white-nationalist base is a nonissue. In Bosa’s place, it may have even been seen as a plus in the eyes of Republican GM Lynch. Either way, it certainly wasn’t viewed as a deficit.

In the end, that’s why this really matters. It’s not to exclude or ban Nick Bosa from any opportunity because of his political beliefs, no matter how you may feel about them. It’s more that in the modern NFL, there seems to be a benefit of the doubt given to athletes on one side of the political, ideological, and racial spectrum that is not shared equally throughout the whole picture. And no amount of social media scrubbing can change that.

Now we’ll sit back and gauge the reaction of Bosa’s future teammates, including cornerback Richard Sherman, who has spoken out repeatedly against racism in the past, and players who are still sympathetic toward Kaepernick. Players feel more truly free in the post-Kaepernick era. That may mean feeling free to tell this rookie what they think of his political leanings. Let’s hope that Nick Bosa actually listens.