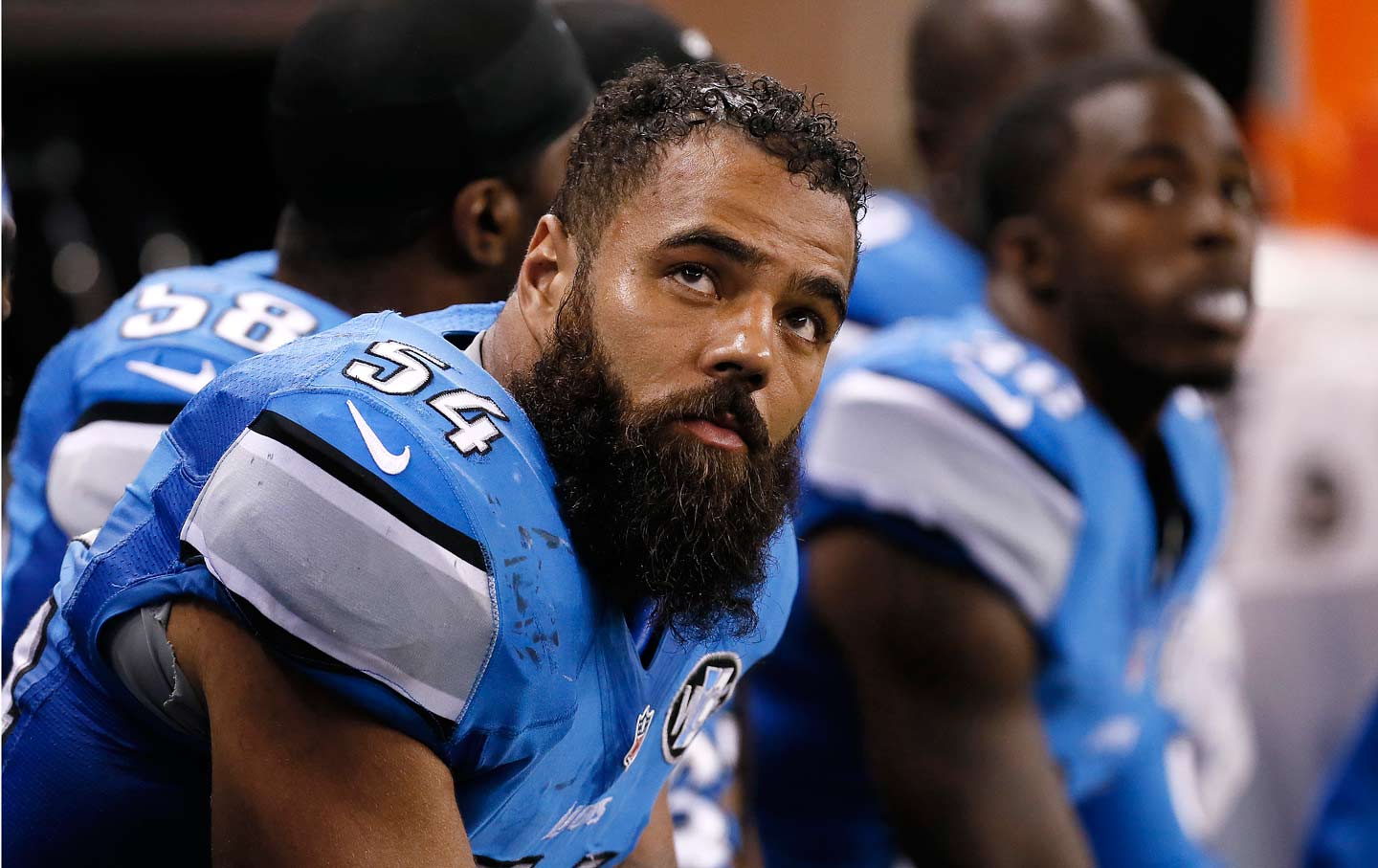 I admit that upon first hearing of the launch of The Players Tribune in October 2014, I thought it was conjured up by The Onion. The very idea that the notoriously reticent and image-conscious Derek Jeter would spearhead a new website where athletes would speak tough truths directly to fans seemed like a prank. Mr. Jeter running a “player’s tribune” would be like Ted Cruz leading a diversity workshop. But, sure enough, The Players Tribune is a real operation: a place where athletes can express opinions longer than sound-bites and engage in some brand management as well. It’s largely light stuff, yet every so often they hit a bull’s eye.

“Man Up,” an essay by Detroit Lions linebacker DeAndre Levy, is one such bull’s eye. An implicit indictment of the league that employs its author, it is about as crystal clear an exposition that you can read about sexual assault and the ways that toxic concepts of “manhood” feed a culture that normalizes rape. As Levy writes, “It’s truly astounding how many awful things that occur in this world because men are afraid of appearing weak.… So what’s the opposite of weakness? Power. And oftentimes, how powerful a man is is directly associated with his sexual exploits. And that’s what I’d like to discuss.”

Discuss it he does, and in great detail. The importance of the piece is that Levy indicts the sports world without making it sound like this is a problem that’s somehow particular to sports. He writes:

The dehumanization and objectification of women are not issues that are specific to male athletes. They are societal problems. But they tend to be more associated with athletes in part because we are often idolized because of our athletic ability. In many ways, we’re considered models of masculinity, which is at the very root of a lot of these issues. So in honor of Sexual Assault Awareness Month, I want to use my platform as an NFL linebacker to discuss how we talk about rape and sexual assault—because not enough men are.

Levy goes on to say that the solution to sexual assault lies not with victim blaming but with the actions of men:

The focus always seems to be on teaching young women how not to get raped and on what steps they can take to “stay safe.” But why are we not also focused on educating young men about the definition of consent and what constitutes rape? We’re essentially dealing with the problem by telling women to be more careful. And that’s bullshit…. It’s important for men, especially in a hyper-masculine culture that breeds so many assholes, to stand up and challenge the values that have been passed down to us.

Perhaps the most valuable part of this is when Levy painstakingly goes through what defines consent. I would imagine some might find this obvious, but we have long lived in a culture that fails miserably at teaching young men what consent actually means. I spoke to a college football team about this very subject, and the answers about what comprised consent—being in your dorm, drinking, how women dress—were infuriating. We have a teaching deficit that needs to be addressed, and Levy’s piece does this is a manner that’s both patient and blunt.

This essay should be used in high schools and colleges across the country. If more people take the issue seriously because an NFL player has his name in the byline, that is fine and dandy. But to be clear: It is not special because it was written by DeAndre Levy. It is special because this kind of candid talk does not happen nearly enough. Consent matters, and DeAndre Levy gets it.

The piece also implicitly indicts an NFL that upholds an outdated concept of manhood, which valorizes the ability to inflict pain, no matter who is on the receiving end. It’s an NFL that at the executive level sees smoking weed as a greater mark against your character than committing sexual assault. It’s an NFL whose executives—many who never played—will excuse anything that they can associate with hyper-aggression and penalize anything they can categorize as “soft.”

DeAndre Levy’s essay should elevate his stature inside and outside the sport. One wonders though if, in the minds of NFL front offices, he’s now been branded a troublemaker for expressing the idea that macho bullshit is in fact bullshit and consent truly does matter.