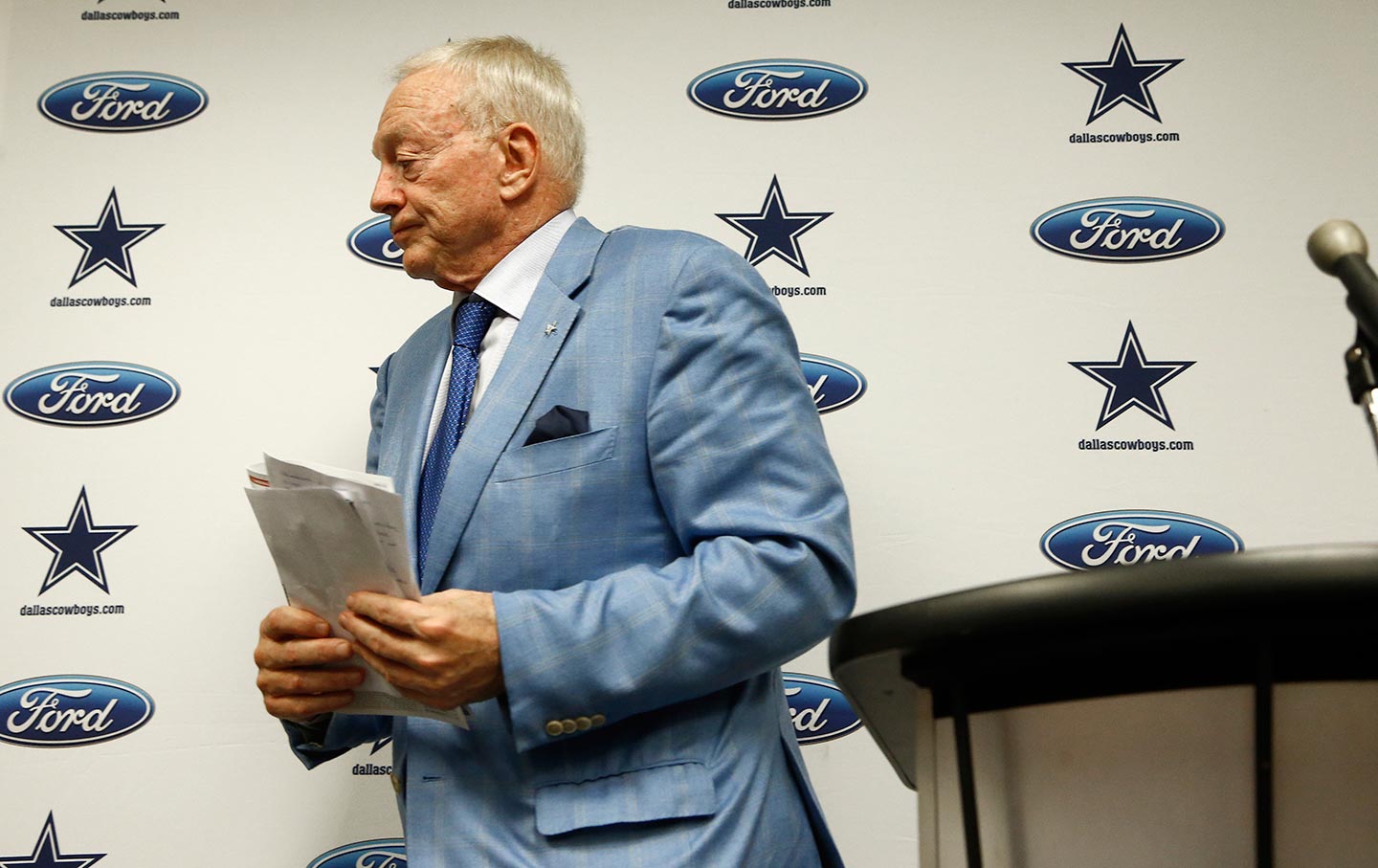 Donald Trump’s efforts to distract from his flailing agenda by demonizing anti-racist NFL players is finally bearing some fruit. Last week there were reports leaking out from NFL players that the owners of their franchises were telling them that the protests against racism and police brutality being staged during the anthem had to end. They were dropping the hammer, even though NFL Commissioner Roger Goodell had promised that there would be no reprisals.

Then we had Dallas Cowboys owner Jerry Jones, who gave over a million dollars to Donald Trump and has signed players guilty of violence against women, DWIs, and even attempted murder, say, “If there is anything that is disrespectful to the flag then we will not play. You understand? If we are disrespecting the flag then we won’t play. Period.” (Jerry Jones, based on his personal life, absence of military service, and patriotic bromides, is basically Donald Trump with a worse plastic surgeon.)

Then on Monday, Jemele Hill, host of the 6 pm ESPN SportsCenter, was suspended for two weeks for “violating ESPN’s social media policy.” What did she do? She engaged with Twitter followers who were both angry at Jerry Jones and wondering whether star Cowboys players like Dak Prescott and Dez Bryant would stand up to him by taking a knee, daring Jones to bench them. Hill raised an issue that has been way too absent from this conversation of protesting athletes: the question of fan accountability. She wrote, “If you strongly reject what Jerry Jones said, the key is his advertisers. Don’t place the burden squarely on the players.” When someone tweeted the names of the Cowboys’ sponsors, she responded with, “This play always work[s]. Change happens when advertisers are impacted. If you feel strongly about JJ’s statement, boycott his advertisers.”

Hill even stated explicitly, “Just so we’re clear: I’m not advocating a NFL boycott. But an unfair burden has been put on players in Dallas & Miami w/ anthem directives.” Yet the news still read that she was suspended for advocating a boycott. Finding a pretext, ESPN took her off the airwaves.

Hill, of course, had been on double not-so-secret probation since September when she called Donald Trump a “white supremacist” on social media. It’s outrageous, and every ESPN employee, no matter their politics, should stand with Hill against efforts to silence her.

The question worth asking is “Why?” Why is a tycoon like Jerry Jones, a person who buys people like Donald Trump, and a multibillion-dollar global media leviathan, so scared of this man? Trump is currently rocking a 32 percent approval rating and being openly mocked by members of his own party. The idiotic kabuki theater of Mike Pence walking out of a game was discredited in real time, to anger and derision. Ratings are down, but that’s less Trump’s influence than ongoing trends across all racial and ethnic groups. Poll numbers are shifting in the direction of the protesting players largely because people don’t want to stand with the big orange baby. It’s a clown show. So why are they afraid of this man?

The answer should be obvious. It’s not fear of Trump. It’s that they are Trump. Billionaires are not allies in the fight against the white-supremacist, anti-labor aims of this administration. They are the beneficiaries. This has gotten twisted in recent months, as people have been grateful for the diverse, proudly political voices that ESPN has hired in recent years, as well as the sight of NFL owners backing their players after Trump’s abhorrent Huntsville, Alabama, speech, where he called NFL protesters “sons of bitches.”

Sports owners and ESPN/Disney CEOs aren’t scared of Trump and his bathroom Twitter spasms. If anything, they are grateful for them. They don’t fear his base. They share his politics. They want black NFL players to shut up and play. They want their sponsors to stay happy. They want the only politics of football to be the politics of Jerry Jones, not Colin Kaepernick, no matter how shameless, hypocritical, and craven it all looks.

Donald Trump then becomes a useful cudgel to beat down any dissenting voices, from the workers on the NFL field to the journalists in the newsroom. These owners plowed millions of dollars into Donald Trump for a reason, and this is the return on their investment. Yet, as embittering as all of this is, it comes with a benefit: Now the lines are drawn more visibly. We know who is on which side, and what’s needed is clear: Whether you are an NFL player, a fan, or a reporter for ESPN, everyone has an interest in standing up to this clumsy, thuggish effort to silence dissenting voices.

We are already seeing this from Philadelphia Eagle Malcolm Jenkins, who responded to Jerry Jones by saying that his fist would be remaining high in the air until change comes to this country, and no “owner” will tell him otherwise. Again, billionaires are not our friends, but solidarity is. As George Atallah of the NFL Players Association tweeted on Monday, “Athletes: through everything that’s happened in the past few weeks, consider the power you wield.” This applies to all of us.