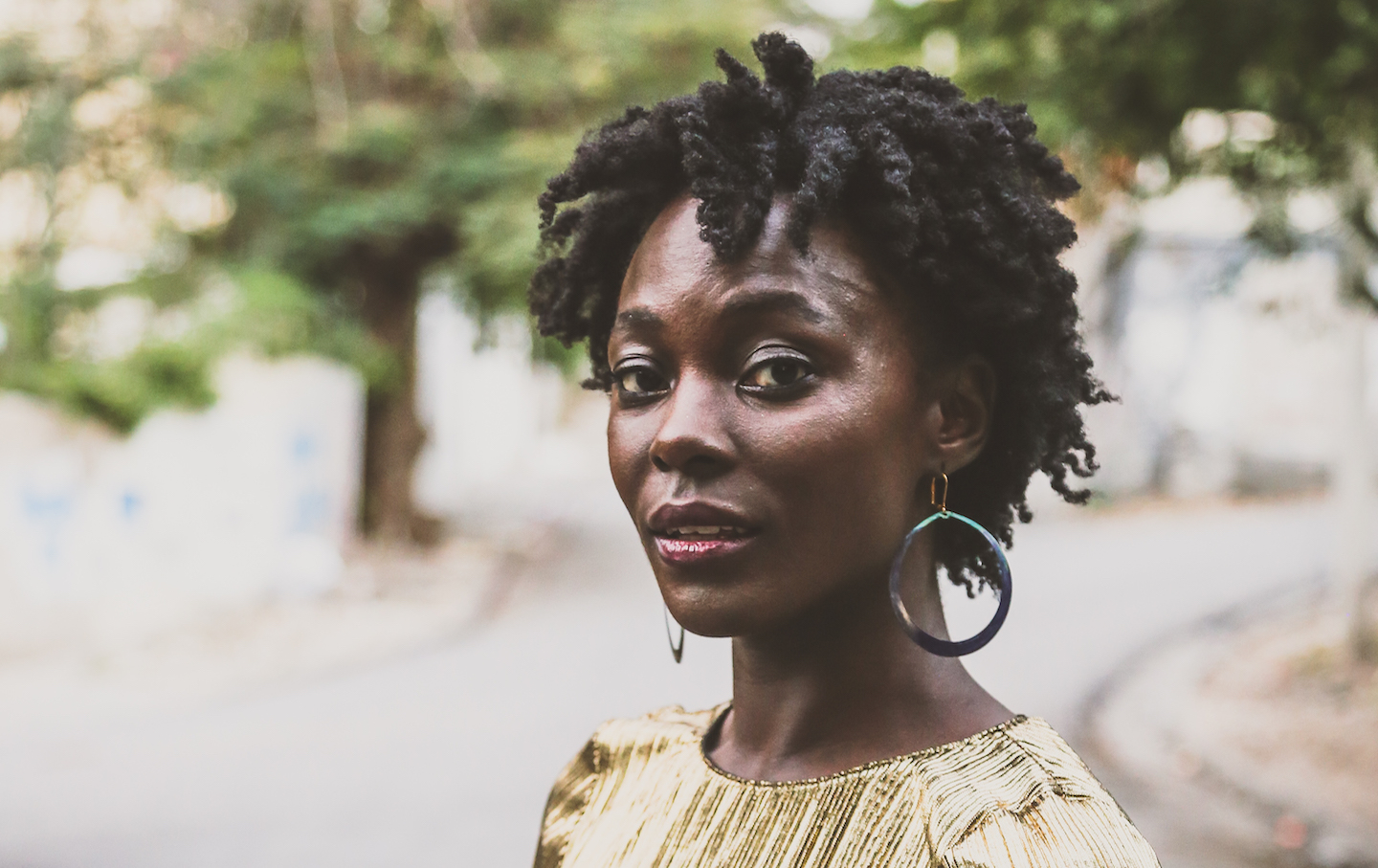 The heart of Fanm d’Ayiti, a savvy and jubilant new album by the singer-composer-musician Nathalie Joachim, is a three-movement work within the piece “Suite pou Dantan,” which Joachim wrote in honor of her ancestral village in Haiti. The first section opens with a bouncy, syncopated pattern of synth tones that sound like the beats of two literal hearts, juxtaposed. A lo-fi recording of a girl’s choir singing in Haitian kreyòl rises softly in the background. Then comes Joachim’s voice, layered atop the choir, singing in harmony with the children but slightly out of sync. A wash of electronics warms the atmosphere, and a string quartet pops in with a percussive motif that hops playfully around the fitful thumps of those artificial heartbeats. In less than three and a half minutes, Joachim bridged vast expanses of time and place, bringing together the sounds of Haitian folk music, Western classical music, electronic, and hints of pop, and she did so in service to one of the deepest of traditions—the tradition of innovation.

Fanm d’Ayiti, a project in development for two years, is the first recording by Joachim released under her own name, and it marks the full arrival of a fresh and invigorating cross-cultural voice. Like Caroline Shaw, Ted Hearne, and other young notable concert music artists, Joachim is a creative multitasker with wide open ears and a restless mind. She’s a Juilliard-educated composer and flutist who, one night, will play in the Grammy-winning chamber group Eighth Blackbird, and the next night appear as half of the acoustic/electronic R&B/pop duo Flutronix (the other half being Allison Loggins-Hull). Joachim has composed a varied body of works for adventurous artists: a long-form score, “Land Bridge,” for the Helen Simoneau Danse company; chamber pieces for various new-music groups, including the Lorelei Ensemble and Duo Noire; and definition-resistant works of hybridization such as a score for solo cello and “processed field recordings” composed for the activist-musician Amanda Gookin. Rather than rush to get her name out front, as too many performers in all spheres of music do, Joachim, now 35, has been experimenting, collaborating with artists in multiple disciplines, and nurturing Fanm d’Ayiti till she and it were ready to land with force.

The title Fanm d’Ayiti means “women of Haiti” in kreyòl. Across its 11 tracks (all sung in kreyòl as well), the album presents a collage of songs connected to Haitian womankind in general and four women in particular, whose voices we hear in oral-history testimony interspersed with the music: Joachim’s maternal grandmother, Ipheta Fortuma, and the celebrated Haitian singers Emerante de Pradines (also known by her married name, Emerante Morse), Toto Bissainthe, and Carole Demesmin. Joachim, who is of Haitian descent but was born and raised in Brooklyn, devoted herself to Haitian cultural history with the fervor of a pilgrim. As she explains in the liner notes, Fanm d’Ayiti developed through conversations she had in Haiti with members of her family and “others willing to share their piece of our cultural puzzle.” Through these discussions, Joachim recalls, she learned about “dozens of Haitian female artists,” women who “used their voices to uplift future generations by celebrating the nation’s strength.”

Three of the songs on the album, including the opener, “Papa Loko,” and the closing title track, “Fanm d’Ayiti,” are Haitian folk songs Joachim rearranged, maintaining the traditional feeling of the material but updating and brightening it with judiciously clever use of her electronics and subtle, often wry string work performed by the Spektral Quartet, a chamber ensemble in residence at the University of Chicago. For all three parts of “Suite pou Dantan,” Joachim went further in her mission of respectful but not reverential reinvention, writing music of her own for the words of vintage Haitian songs. The kreyòl lyrics evoke both the gods of vodou tradition and the deity of the Christian faith imposed upon Haitians by Catholic missionaries. The music, appropriately, has an earthy tunefulness that makes it feel timeless and a multiformity in its sonic textures that sounds utterly of our time.

Among the wonders of Fanm d’Ayiti is the meticulous balance of its disparate elements. Joachim has not used a string quartet to “elevate” folk materials, nor employed folk materials to make chamber music more accessible. Joachim doesn’t treat traditional Haitian music and classical new music—and electronics—as equally valid; she treats them like a single thing.

Joachim created Fanm d’Ayiti in tribute to women who, in her words, have been “committed to carrying forward the story of the first free black republic—people known for making treasured somethings out of nothing.” In the process, she has drawn inventively from the musical resources of multiple heritages to make something of a treasure herself.