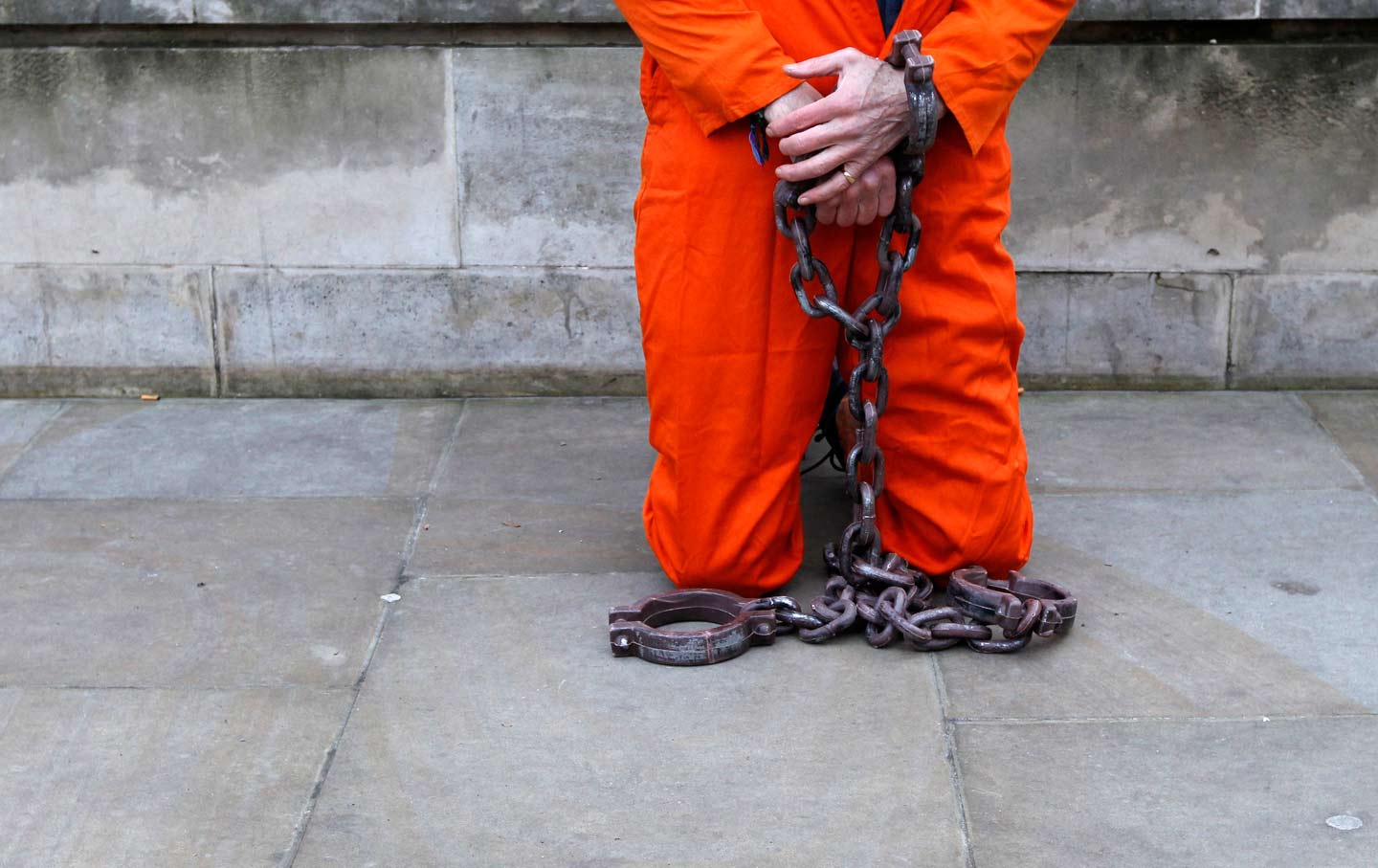 A demonstrator, dressed as a prisoner, protests against the US prison at Guantánamo Bay, outside the Ministry of Defence in London on February 6, 2010. (Reuters / Luke Macgregor)

I represent one of the last remaining detainees in Guantánamo, Sharqawi Al Hajj, a 43-year-old man from Yemen whom the United States has been holding without charge for over 15 years and plans to keep in Guantánamo indefinitely. Recently he gave me a small arts-and-crafts tree that he made in Guantánamo. It’s a remarkable piece that should make me marvel at the perseverance of human beings. Instead, I see a man who thinks he may die in Guantánamo painstakingly sticking green plastic bristles into branches made of pipe cleaners to keep from going out of his mind, sitting alongside a handful of other trapped detainees making miniatures of real-life objects they may never again see. He’s shackled to a bolt in the floor in an art class in a mostly empty prison where detainees were brought to be broken—a prison that Guantánamo’s defenders call a “very fine place,” and that Donald Trump wants to fill up, or at least keep anyone from leaving.

Sharqawi was brought to Guantánamo in 2004, after being held for more than two years in CIA sites where interrogators tried to beat confessions out of him. In the years since his transfer to Guantánamo, the government has continued to hold him without charge, in part because it has never accused him of participating in anything that would constitute a war crime, and because much of its information against him is derived from torture. In 2011, a federal judge found that he had been subjected to “patent…physical and psychological coercion”—regular beatings, threats of electrocution, prolonged isolation, complete darkness, ear-splitting sound—and that statements from his interrogations that the government wanted to use to justify his detention were tainted and unreliable.

If, in art class, Sharqawi could draw images of his treatment in and before Guantánamo, they might be grotesque and arresting, and not reassuring like the landscapes and still lifes he is limited to painting. Today he might just draw a tortured figure walking aimlessly around and around within high walls while life passes on the other side.

On January 11, the 16th anniversary of the prison’s opening, Sharqawi and 10 other Guantánamo detainees brought a new court challenge to their ongoing detention, the perpetual nature of which has never been clearer than under Trump. In their challenge, filed by their lawyers in the district court in Washington, DC, the men argue that the continuing status quo is untenable—that their detention of more than 15 years without charge or end, on the basis of accusations from another era and with no more evidence than applies in a negligence case, is arbitrary and unlawful. They argue that the laws of war, which traditionally permit detention of combatants until the end of hostilities, do not save these detentions from arbitrariness. That body of law never envisioned perpetual detention in connection with an amorphous conflict that bears no resemblance to the conflicts that informed its development.

The men would have brought the challenge, no matter the president. But under Trump, whose animus toward and profiling of millions of ordinary Muslims as dangerous has driven policy in other areas, these foreign Muslims stand no chance of protection without the intervention of the courts. As a candidate, Trump bellowed early on that there should be no further transfers out of Guantánamo, and, indeed, that has been his administration’s de facto policy for the past year.

He’s shackled to a bolt in the floor in an art class in a mostly empty prison where detainees were brought to be broken.

The implication of the men’s argument—that their continuing detention is arbitrary and without good cause—is that this detention has no other purpose or effect but to punish. Indeed, the notion that detention at Guantánamo was ever not about retribution and punishment, but purely about removing fighters from the battlefield—the only legitimate, non-punitive purpose of wartime detention—flies in the face of the prison’s history. In the aftermath of 9/11, the United States made clear that it was going to “bring justice” to its enemies and make them pay. Soldiers in Guantánamo who received detainees—masked and shoved off transfer planes—were made to believe these were the men involved in 9/11 so as to ensure unforgiving treatment. The conditions in which men were held, amply documented, speak for themselves: incommunicado, in outdoor cages, in solitary confinement in supermax prison buildings, in a system the International Committee of the Red Cross once called an “intentional…form of torture.”

When Tom Cotton, Trump’s rumored choice for CIA chief, said in the Senate chamber in 2015 that every last detainee could “rot in hell,” and until then they could “rot in Guantánamo Bay,” he understood that Guantánamo has always been not just a holding place but a place to which men have been banished. When Trump vows to send more detainees to Guantánamo, it’s a threat that Guantánamo remains a prison for Muslims where suspects are stripped of their rights. The punitive nature of detention today could not be clearer than in the case of five remaining detainees—among 28 being held without charge—who have been approved for release from Guantánamo, some of them for years. They remain in the prison camp for no reason of military necessity, but because the clock ran out under Obama—the result of a combination of bureaucratic inaction and delay—and Trump has declared no one is leaving.

Sharqawi does not know or perhaps believe that his request to the court will save him. He has been to court before. But under this president, in these times, he says this action is the last hope he has, and he needs to keep hope to survive.