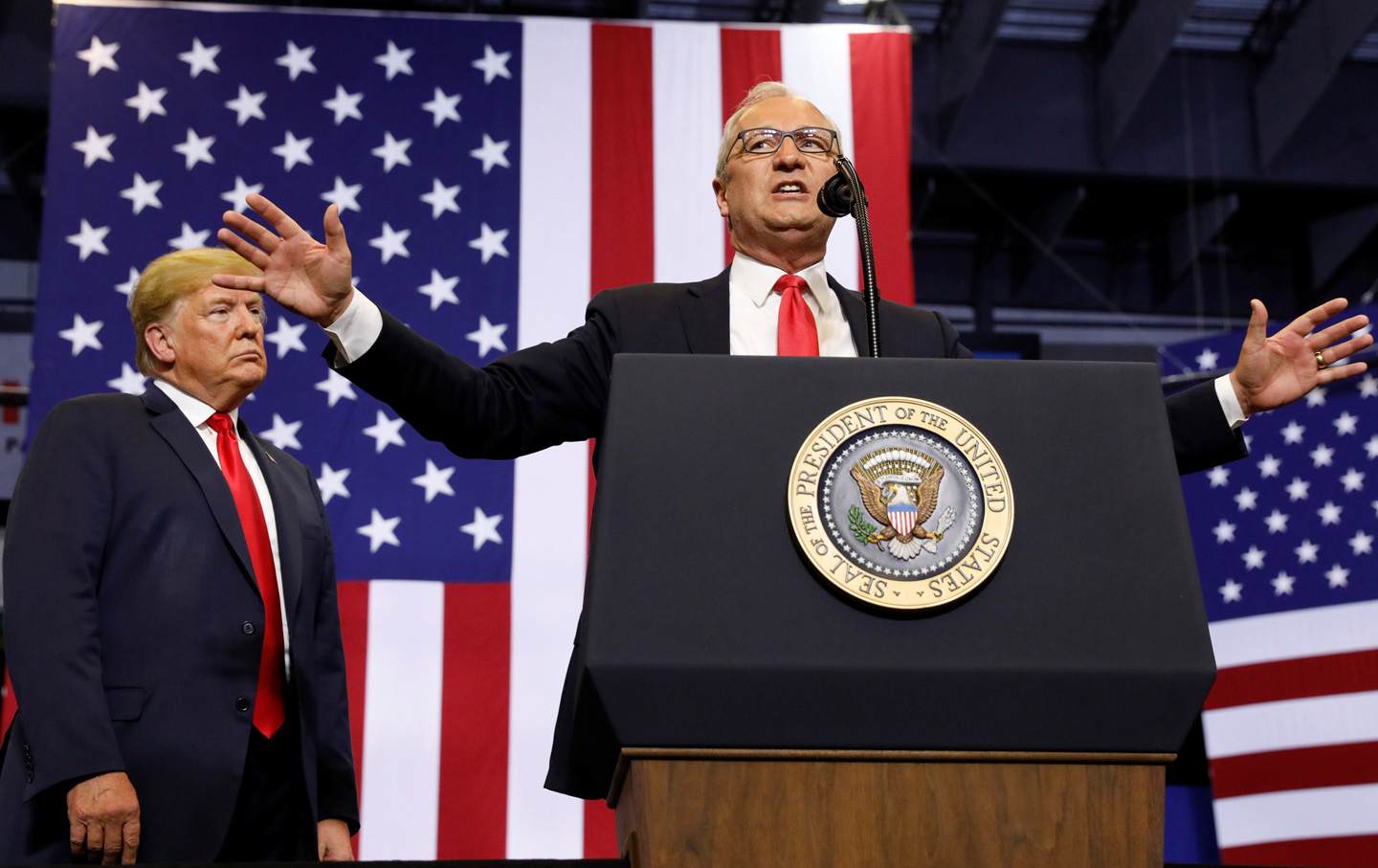 Senate majority leader Mitch McConnell and Senate Judiciary Committee Chuck Grassley were certainly reprehensible in their determination to “plow right through” the system of checks and balances in order to place a scandal-plagued nominee on the US Supreme Court. But the over-the-top partisanship of McConnell, Grassley, and the Republican men who sit on the Senate Judiciary Committee was nothing compared to the cruel and unusual advocacy for Justice Brett Kavanaugh by Republican challengers to Democratic senators who opposed Kavanaugh’s confirmation.

It is likely that the fight for control of the Senate will be decided in states that backed the new justice’s patron, Donald Trump, in 2016. And the Republicans who are seeking to displace Democratic senators from those states are going all-in: peddling appalling defenses of Kavanaugh and making visceral attacks on his critics central to their campaigns.

Congressman Kevin Cramer, the shoot-from-the-lip conservative who is the party’s Senate nominee in North Dakota, dismissed Dr. Christine Blasey Ford’s allegation that she was sexually assaulted by Kavanaugh as “absurd.” Why? “These are teenagers who evidently were drunk, according to her own statement,” Cramer asserted. Asked to clarify, the man who is challenging Democratic Senator Heidi Heitkamp claimed that “nothing evidently happened.”

“My point was is that there was no type of intercourse or anything like that,” he argued. “That was my point, that nothing happened in terms of a sexual event, um, beyond, obviously, the attack.”

“Even if it's all true, does it disqualify him?” —Republican Kevin Cramer defending Brett Kavanaugh

Cramer was not the only GOP challenger to a Democratic senator who has been more vehement in advocating for Kavanaugh than even the most outrageous Senate Republicans. Though he admitted that he had seen only snippets of the Senate Judiciary Committee session on September 17, at which Dr. Ford and Kavanaugh testified, Missouri Senate candidate Josh Hawley dismissed the hearing (which even Kavanaugh backers like Senator Shelley Moore Capito [R-WV] called “very compelling” and “riveting”) as “truly a circus.” Even as he acknowledged that he was not aware of what all had been said, the man who is challenging Democratic Senator Claire McCaskill shrugged off Dr. Ford’s testimony with a casual claim Democrats had “launched an ambush on a good man.”

But at least Hawley kept campaigning in Missouri.

Wisconsin Republican Senate candidate Leah Vukmir flew to Washington on the eve of the Judiciary Committee hearing and, before either Dr. Ford or Kavanaugh had testified, joined a rally calling for Kavanaugh’s immediate confirmation. “Democrats need to stop the political posturing, and hold a vote this week on Judge Kavanaugh’s nomination,” declared the challenger to Democratic Senator Tammy Baldwin.

Vukmir dismissed well-documented concerns about the judge’s past as “uncorroborated attacks on Judge Kavanaugh being irresponsibly published by the Fake News media.” Vukmir ridiculed sincere calls for scrutiny of a nominee for the high court as “the Democrat delay circus” and claimed that “what has become clear is that the Far Left is engaged in an all-out, no-holds-barred, last-minute character assassination, rather than responsibly vetting and filling a seat on the Supreme Court.”

After the hearing concluded, Vukmir turned to attacking the people who believed Dr. Ford. In an opinion piece for a Fox News website, she ripped criticism of Kavanaugh as “virtue signaling, smears and hyperbole.” Citizens who urged senators to conduct a thorough examination of the allegations against the nominee—many of them survivors of sexual abuse who had paid their own way to Washington to lobby their elected representatives—were dismissed as a mob of “paid protesters [who] were instructed to corner and confront the so-called ‘enemy.’”

Senators swear an oath to “support and defend the Constitution of the United States against all enemies, foreign and domestic” and to “bear true faith and allegiance to the same.” As part of that oath, senators commit themselves to maintain a system of checks and balances that requires them to take seriously a duty to provide advice and consent regarding judicial nominations.

Cramer, Hawley and Vukmir have signaled that they have no interest in taking that oath seriously. This makes their races against Democratic women who opposed Kavanaugh—and who are seeking reelection in states that backed Trump in 2016—particularly important measures of the fallout from the bitter confirmation fight.

Baldwin seems to be doing well in Wisconsin. A poll taken at the time of the Kavanaugh vote had the Democrat—one of the first senators to come out against Trump’s nominee—leading by 10 points. (The Marquette University Law School survey found that 44 percent of likely voters had an unfavorable view of Kavanaugh, while 42 percent had a favorable view.)

McCaskill, a sly strategist and able campaigner, was running roughly even with Hawley in several Missouri surveys taken as the Kavanaugh confirmation fight was at its most intense.

North Dakota’s Heitkamp has been trailing through most of the year in a state where Democrat Hillary Clinton won just 27 percent of the vote in 2016. Despite speculation that a vote against Kavanaugh would doom her politically, Heitkamp cast just that vote. After the Senate backed Kavanaugh with a 50-48 division, Heitkamp’s campaign began running a television ad in which she calmly explains: “I thought you should hear exactly why I voted against Judge Kavanaugh. First off, honestly I don’t think he told the truth. And even if he did, he showed himself to be too biased to be impartial. I voted for Neil Gorsuch so I know there are many other conservative judges who can fill this job without tearing our country apart. I approve this message because I believe a senator has to put politics aside and do what’s right for our country.”

That’s a far cry from Cramer, who is now attacking the #MeToo movement as “this movement toward victimization.” Women in his family weren’t complaining because, he claimed in an interview with The New York Times: “They are pioneers of the prairie. These are tough people whose grandparents were tough and great-grandparents were tough.” Informed of Cramer’s latest outburst, Heitkamp said, “I think it’s wonderful that his wife has never had an experience, and good for her, and it’s wonderful his mom hasn’t. My mom did. And I think it affected my mom her whole life. And it didn’t make her less strong.”

Recalling her mother, Doreen Heitkamp, who was sexually assaulted as a teenager, the senator told a reporter: “I want you to put this in there: it did not make my mom less strong that she was a victim. She got stronger and she made us strong.”