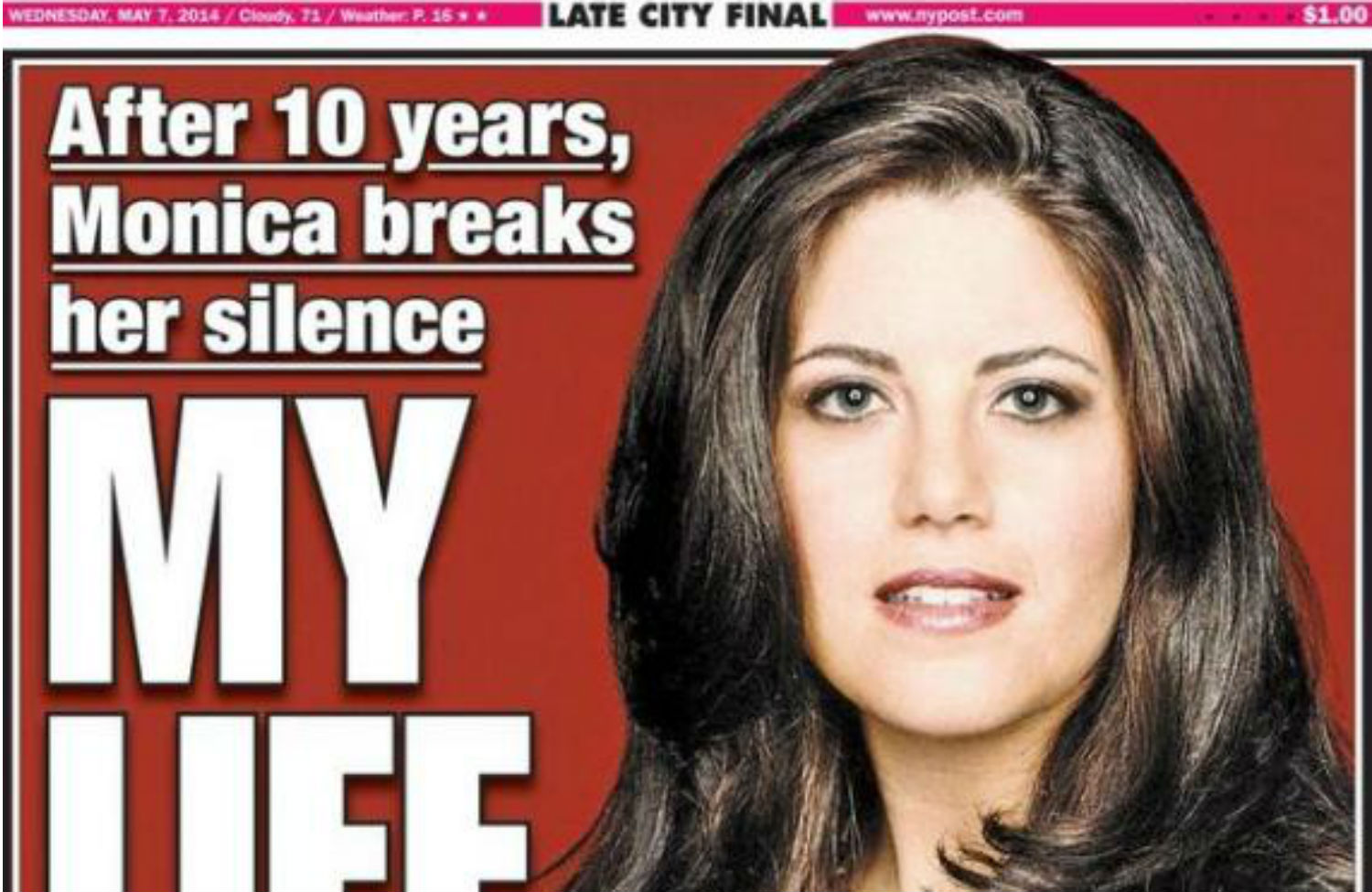 Have the media grown up half as much as Monica Lewinsky?

From the looks of it, Lewinsky, now 40, has learned something from the humiliating fallout of the amour fou she had at 22. Unlike most of the stupid things people do at that age, her stupid thing led to the impeachment of a president and made her name into a national punch line for the last sixteen years. “Now,” she writes in an essay for Vanity Fair, “I am determined to have a different ending to my story. I’ve decided, finally, to stick my head above the parapet so that I can take back my narrative and give a purpose to my past.”

CNN New Day co-host Chris Cuomo said last week that if “Monicagate” had occurred today, the press wouldn’t overreact as it did in the 1990s. After all, media attitudes have changed in the last generation. Outside of Fox and some stragglers, the corporate media officially love gay marriage and hate bullying; some MSMers are aware of this thing called “slut-shaming”; and, hey, we have social media, where bullies themselves can be shamed and then tweeted away into the ether. Because Bill Clinton himself survived the scandal, you could conceivably argue that the media sniggered past its adolescence and learned to treat at least some sex scandals (Mark Sanford, David Vitter) with a sense of proportion.

But evidence of a mature media response to Lewinsky is pretty thin. There are plenty of understanding pieces online, of course, like Emily Shire’s “Stop Slut Slamming Monica Lewinsky!” or Mel Robbins’s “Stop judging Monica Lewinsky.” But much of the mainstream media are still writing on the bathroom stall.

The New York Post, for instance, put Lewinsky on its cover last week with the headline, “MY LIFE SUCKS!” Inside, columnist Andrea Peyser was at her ugliest best, making sure you knew it was middle-school pun intended.

She’s America’s favorite beret-wearing former intern, whose very name has become a synonym for a sex act she eagerly performed on her knees, a dame who rocketed to fame for failing to dry-clean a blue dress stained with the seed of the then-leader of the free world.

Now, Lewinsky, 40, wants our pity and, perhaps, a job she can perform while sitting upright.

Peyser has a record of shaming women for daring to speak up. She wrote a column about one of the women who charged former GOP presidential candidate Herman Cain with sexual harassment titled “Jobless & shameless gal going for gold.”

Robin Abcarian updates the ancient gold-digger motif in the Los Angeles Times by adding a soupçon of entrepreneurial envy. “’Take back my narrative?”” she scoffs at Lewinsky. “This is a hilarious misstatement considering she spent a decade leveraging her infamy and earning who-knows-how-much money, exploiting her affair with Clinton. Abcarian indicts Lewinsky with a list of her gigs—SNL guest, Jenny Craig spokeswoman, dating-show host. Worse, somehow, Lewinsky “became a handbag designer whose pricey haute hippie knit bags were retailed at Henri Bendel,” Peyser writes. “Not too shabby.”

Maybe the most telling responses to Monica’s plea for understanding in Vanity Fair have been silent, like Michael Isikoff’s (not to mention Bill and Hillary Clinton’s). But the most slippery by far are those from media figures who sound sympathetic to Lewinsky, while somehow managing to misremember their behavior back in the day.

Joe Scarborough, whose passive-aggressive feelings about women are buried in a very shallow grave, launched into an epic rant last week against female columnists now attacking Lewinsky. He even threw down a copy of the NY Post, calling it “a disgrace.”

“Why is it in 2014 it’s the women who are turned into the bad guys?” he asked. “I never got it, and after all these years there are females going out protecting Bill Clinton for his horrific acts.” Lewinsky, he said, “shows a lot of dignity, a lot more dignity than people who preyed on her and then tried to turn her into a slut or a nut.”

On that last line, I completely agree. But then Joe continued, “You all are sick. You were sick into the ’90s, you women’s rights ladies…. you defended the wrong person.”

Joe Scarborough has to attack Bill Clinton—and the “women’s rights ladies” who defended him for his policies despite his rotten behavior—because, as a young gun in Congress, Scarborough voted to impeach Clinton over the Lewinsky affair. If Bill hadn’t committed a “horrific act,” it would have been horrifically political indeed for Joe and his cohorts to impeach him. Besides, Scarborough’s take on Lewinsky can be folded rather neatly into the judo defense move, pushed most prominently by Rand Paul, that it’s really the “sexual predator” Bill Clinton and the Democrat Party who are waging a war on women.

At the end of his rant, Scarborough absolved the deftest judo master of them all, Maureen Dowd, saying, “I’m not talking about Maureen at all.” Which is a nice white lie to tell about MoDo, who won a Pulitzer Prize for her 1998 columns on the Clintons and Lewinsky.

Dowd penned Lewinsky’s book proposal for her: “Preface: Powerful men who are busy running things aren’t as hard to get as you think. It’s really, really easy if you show a little gumption and a lot of cleavage.” Later that month, she wrote, “It is Ms. Lewinsky who comes across as the red-blooded predator, wailing to her girl friends that the President wouldn’t go all the way.”

Just last week, Dowd penned an equally imaginative proposal: that she was never part of the gang attacking Lewinsky. From Dowd’s May 6 column:

Dowd, as Hess says, “appears unaware that it’s the caricature she helped to build that’s still haunting Lewinsky after all these years.”

The uses of the Clinton/Lewinsky story are so multiple and so crisscrossed that you could almost believe the theory Lynne Cheney introduced on The O’Reilly Factor—that Lewinsky’s essay is “an effort on the Clintons’ part to get that story out of the way. Would Vanity Fair publish anything about Monica Lewinsky that Hillary Clinton didn’t want in Vanity Fair?” To which guest host Laura Ingraham responded, “I love this theory. It actually makes perfect sense.”

When Monica did something stupid, she at least had the excuse of being 21 years old. The media, on the other hand, are ageless.