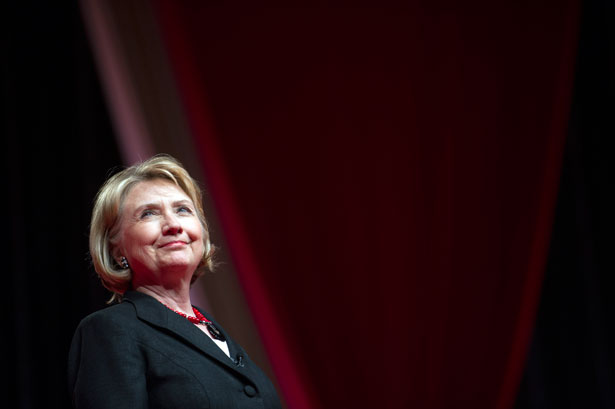 The same media that are obsessed with Hillary—asking nonstop will she or won’t she, when will she, what’s that pause in her voice mean, is she likable enough—that same media have decided they are experiencing “Hillary fatigue.”

Then, in the next beat and without a glimmer of self-awareness, MJ co-host Willie Geist asked Matt Lewis of The Daily Caller, “Let’s play the parlor game…. who would be the strongest challenger” to Hillary Clinton? (Lewis obliged, suggesting Rubio and Christie, two nonstarters, but if they somehow luck out, they could rise to ranks of fatigue-makers, too.)

The fatigue galloped on. On yesterday’s MJ, Mike Barnacle asked, as if he were stuck in the political junkie’s version of 50 First Dates: “Chuck, it’s obviously July 2014, but do you sense, within the media, already, right now, Clinton exhaustion, just from covering the early stages of not even a campaign yet?” Chuck spent another chunk of segment explaining that he sure does sense that.

Of course, it’s not just Morning Joe that’s exhausting itself over Hillary. All of the MSM’s endless, repetitive, obsessive speculation about Hillary (or, really, about anyone or anything that stimulates their mass fantasy) is little more than media masturbation—getting themselves excited in the easiest way possible, without actual reporting, excited enough to fill the required twenty-four hours of “news” and to do it all again the next day.

“Hillary fatigue” isn’t just a media ailment. It’s also a GOP talking point. It’s been around, on and off, for years. But Tom Kludt at Talking Points Memo says the meme got a huge boost recently, when Republican National Committee chairman Reince Priebus declared on last Sunday’s Meet the Press, “There’s Hillary fatigue already out there. It’s setting in. People are tired of this story. And I just happen to believe that this early run for the White House is going to come back and bite them. And it already is.”

From there, Kludt traced “Hillary fatigue” to U.S. News & World Report, as well as to Morning Joe. But “[in] fairness,” he adds, “this storyline bubbled on the left two days before Priebus appeared on Meet the Press. Liberal comedian Bill Maher urged Clinton on Friday to ‘just go away’ before her 2016 run. Otherwise, he warned Clinton, ‘you’re going to blow this.’”

None of this is to say that Hillary fatigue isn’t a real, palpable thing. A lot of people, in and out of the media, are tired of Hillary—of her politics, aspects of her personality and/or of the incessant coverage of her.

But like any catchy term, “Clinton fatigue” can be overused and misleading. “A Clear Case of Clinton Fatigue,” the New York Times headlined a story, in 1999. There was a spate of such headlines then, most asking whether Al Gore should keep his distance from Bill Clinton for his 2000 presidential run.

Now, the rearview wisdom is that Gore would have done better by ignoring the fatigue warnings and basking instead in the Clinton good-economic-times aura.