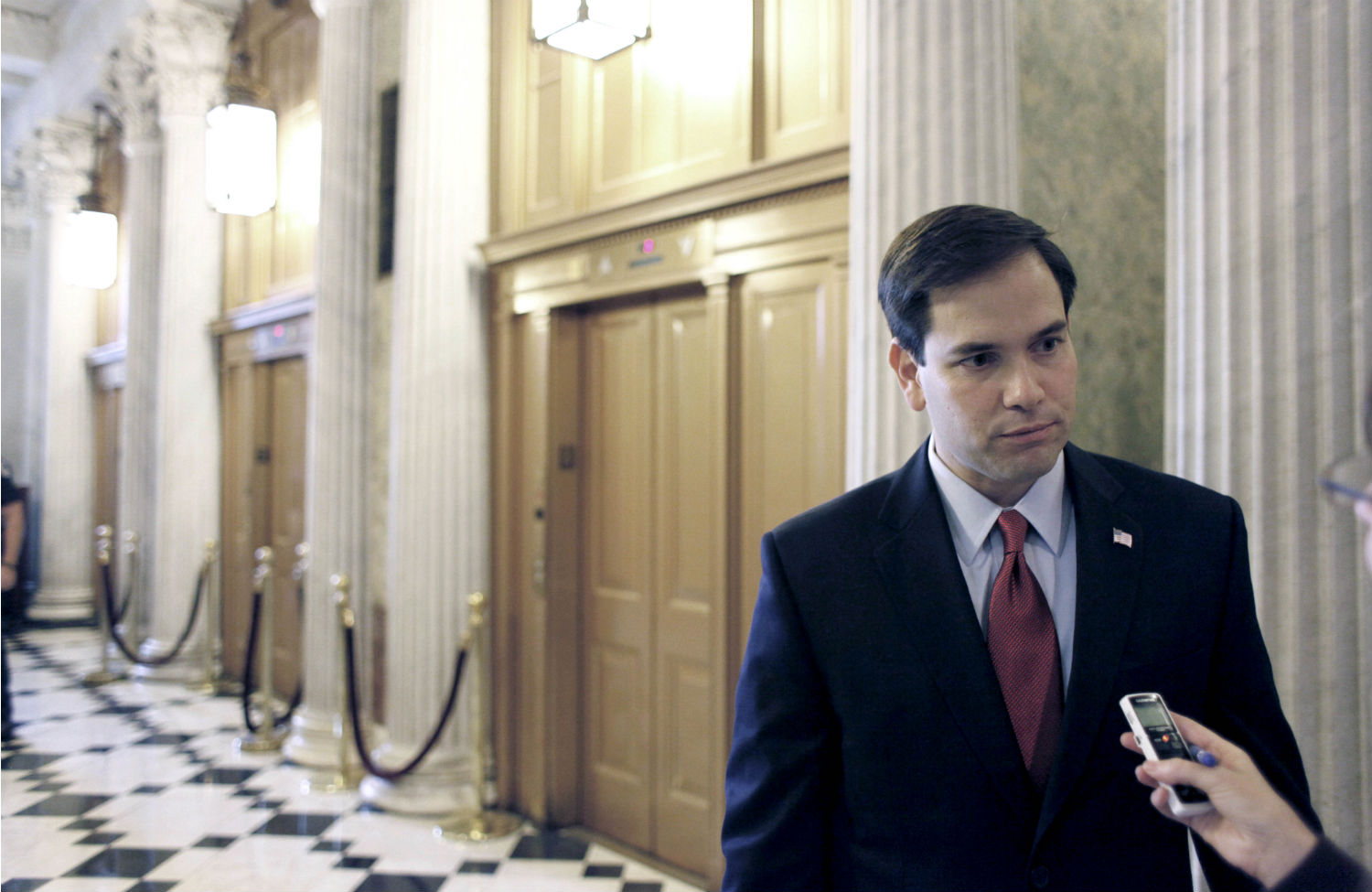 Marco Rubio speaks with a reporter outside of the Senate Chamber on Capitol Hill. (AP Photo/Harry Hamburg)

Republican Senator Marco Rubio has discovered “the greatest tool to lift children and families from poverty,” which he shared in a speech on Wednesday: “It’s called marriage.”

So much for the GOP’s much-hyped pivot to poverty backed by bold new policy specifics. Speaking at the Capitol, Rubio took the fiftieth anniversary of the War on Poverty as an opportunity to assail the tyranny of the federal government, and to call for a dismantling of the safety net in exchange for a fuller embrace of “the American free enterprise system.”

“I am proposing that we turn Washington’s anti-poverty programs—and the trillions spent on them—over to the states,” Rubio said. It’s easy to guess how well that would work out by studying what happened after the Supreme Court ruled that states could decide whether to accept millions in federal funding to expand their Medicaid programs: states controlled by conservatives largely opted out, ensuring that 5 million low-income people would remain uninsured and vulnerable to catastrophic medical expenses.

Rubio criticized efforts to raise the federal minimum wage to $10.10 an hour, saying that it is not a “solution” for economic inequality. True, but has anyone claimed it is? “The only solution that will achieve meaningful and lasting results is to provide those who are stuck in low-paying jobs the real opportunity to move up to better paying jobs,” Rubio said, an opportunity that could be created by giving states “flexibility” to “put in place programs that give those currently stuck in low-wage jobs access to a job training system.”

Job training is fine, but neither vocational schools nor Rubio’s one big new policy idea—replacing the earned income tax credit with subsidies to low-income workers—addresses the fundamental driver of the unemployment crisis: the fact that the economy is not producing jobs on par with the number of people looking for them. Still, income subsidies are a surprising idea coming from Rubio, given how frequently Republicans decry “handouts.” The subsidies, Rubio said, “would allow an unemployed individual to take a job that pays, say, $18,000 a year—which on its own is not enough to make ends meet—but then receive a federal enhancement to make the job a more enticing alternative to collecting unemployment insurance.”

To be fair, Rubio does have a proposal for job creation—it just isn’t new: gut regulations and the tax code, and crank up austerity measures. The fact that these ideas have been in play for years is helpful in assessing Rubio’s claim that he wants to “address the causes of opportunity inequality, not just the consequences.” A nice goal, but recent history suggests his proposals would do the opposite.

UPDATE: I spoke with Sharon Parrot, vice president for budget policy and economic opportunity at the Center on Budget and Policy Priorities, about Rubio’s proposal for replacing the Earned Income Tax Credit with wage subsidies. Parrot said that unless the transition to a wage subsidy program included a significant spending increase, the result of the swap would be an increase in child poverty. That’s because the EITC mainly benefits families and is very restricted for childless adults, whereas Rubio implied his wage subsidies would apply to everyone below a certain threshold. It’s certainly a problem that the EITC is so restricted for singles, but without more spending “the only way to make the math work is to shift large amounts of money from low-income families.” Preserving the credit for families (and increasing it for childless adults) is important, Parrot said, not only because it reduces poverty, but also because it’s been shown to provide the incentive to work that Rubio called for.