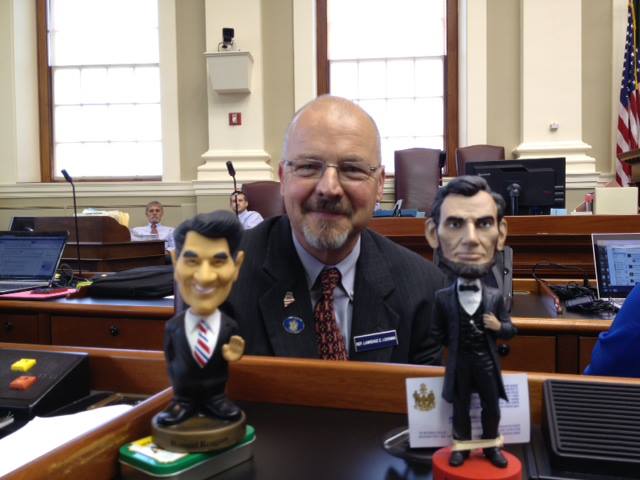 Representative Lawrence Lockman of Maine was thrust into the national spotlight when blogger Mike Tipping posted a collection of offensive comments the first-term Republican has made through decades of extremist activism and advocacy. Maine Democrats called for his resignation Tuesday. He released a statement of regret (no, not an apology) the next day.

As director of the Pro Life Education Association in 1990, he was quoted as saying:

If a woman has [the right to abortion], why shouldn’t a man be free to use his superior strength to force himself on a woman? At least the rapist’s pursuit of sexual freedom doesn’t [in most cases] result in anyone’s death.

Arguing against AIDS education in 1987, he wrote:

In the overwhelming majority of cases, people are dying because of their addiction to sodomy. They are dying because progressive, enlightened, tolerant people in politics and in medicine have assured the public that the practice of sodomy is a legitimate alternative lifestyle, rather than a perverted, depraved crime against humanity.

As vice president for Concerned Maine Families in 1995, he fought for a referendum that would ban discrimination against gay and lesbian people. That year, he wrote an op-ed saying of state antidiscrimination measures:

You can bet the rent money they will demand that employers set up goals and timetables to achieve 10 percent homosexual representation in the workforce and in government contracts.

Here’s Lockman’s statement on these comments:

I have always been passionate about my beliefs, and years ago I said things that I regret.… I hold no animosity toward anyone by virtue of their gender or sexual orientation, and today I am focused on ensuring freedom and economic prosperity for all Mainers.

Lockman was elected to Maine’s House of Representatives in 2012.