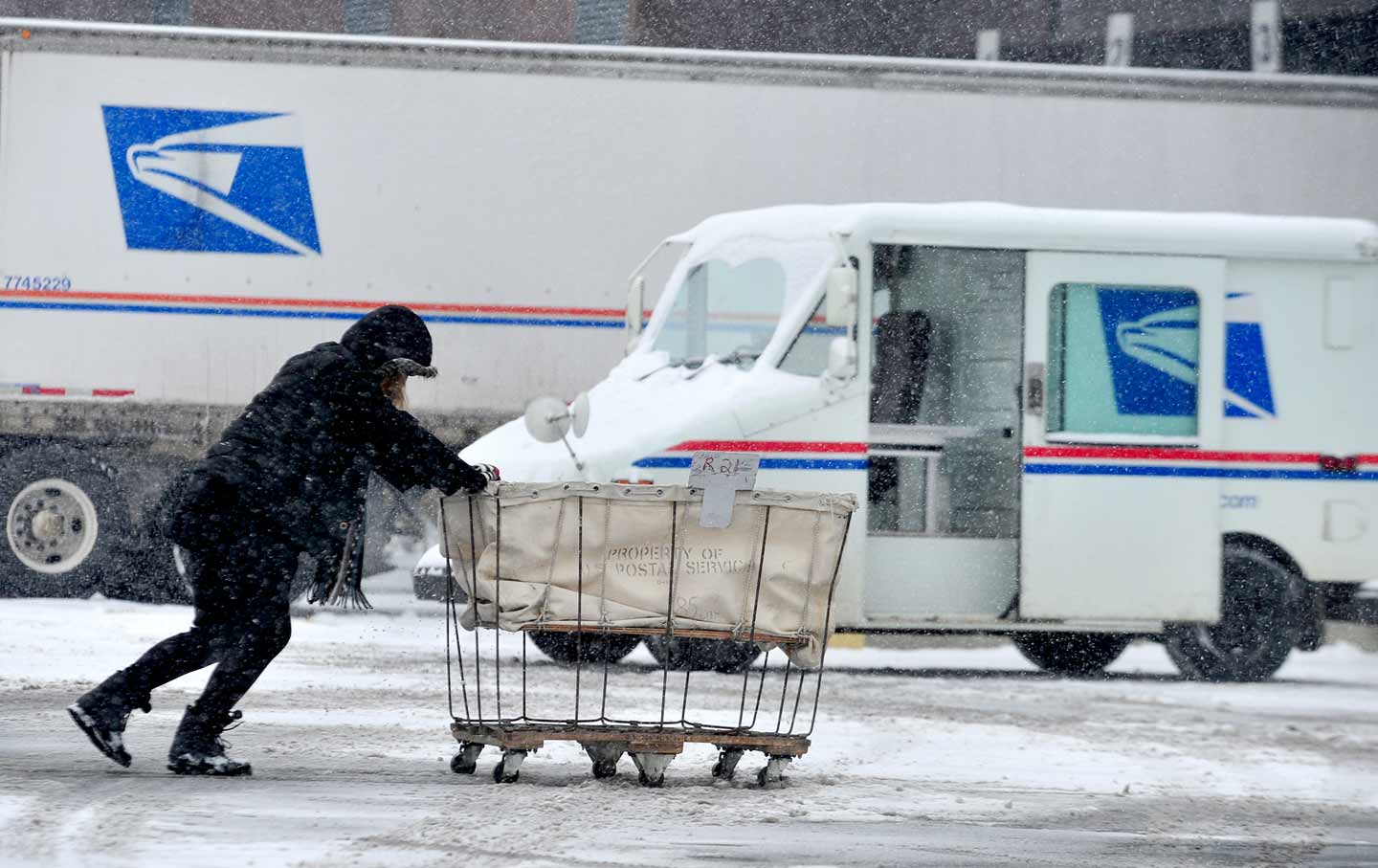 A USPS carrier pushes a mail cart from her carrier vehicle to the loading dock area of the Columbus, Indiana, Post Office during a snowstorm. (AP Photo / The Republic, Joel Philippsen)

If ever there was a time to make a case for the United States Postal Service’s necessity in American civic, political, and cultural life, it may have already passed. It may then come as no surprise that two surveys of the history of the USPS are out this year: Devin Leonard’s intensely readable Neither Snow Nor Rain: A History of the United States Postal Service and Winifred Gallagher’s impressively researched How The Post Office Created America: A History.

The aim of both writers—Gallagher, a former psychology editor at American Health, and Leonard, a staff writer at Bloomberg Business—is to remind us how the Post Office has so deeply and inextricably shaped the political and cultural life of America. Our mail service—still one of the largest and most efficient in the world, easily outperforming Germany and England—has had an incredible, but often unacknowledged, impact on transportation, communications, and technology in American history. Gallagher, whose study is not short of pronouncements, opens: “The history of the post office is nothing less than the history of America.”

In its beginnings, politics and the US Post Office (before it was known as the USPS) were tightly wound together, as George Washington and other founding fathers believed that the postal service was a manifestation of democracy and one that must be made available to all citizens of their new nation. With the Post Office, citizens could not only achieve a sense of national consciousness but they could also experience the real and tangible pleasures of the new democracy. According to Leonard, Washington “wanted the postal service to be a force that promoted enlightenment, circulating newspapers and political documents that would guard the public from tyrants and demagogues spreading misinformation.”

Benjamin Franklin was the first postmaster general, and he was, according to Leonard, “revenue-oriented” and more committed to making the Post Office a profitable business. (An issue, ironically enough, that has continued to shadow its entire existence.) Money, as much as the postal service needed it, was the cause for some doubt among citizens, and its apparent unchecked power also stirred up skepticism. Thomas Jefferson, Leonard continues, believed that it “construct[ed] a massive federal system that would be as oppressive as European monarchies.” Only after the American Revolutionary War was the Post Office’s power understood, with members of government seeing the the political and civic potential of the mail service, deciding it must be a central institution kept close to the arm of the government, lest it be exploited.

The books are colored by entertaining and lively retellings, including the exploits of the Pony Express and of Wells Fargo. Called “interlopers” by Leonard, Wells Fargo and the Pony Express represented seismic shifts in the history of the Post Office: These private entities began offering mail service to areas where there were no post offices—exploiting this absence for their own financial gain. With his partner William G. Fargo, Henry Wells arranged mail delivery in San Francisco in the 1850s at a time when mail cost six cents a sheet (and the daily wage amount to approximately fifty cents). “For residents of these California towns, Wells Fargo was the post office,” Leonard writes.

The mythologized history of Wells Fargo and the Pony Express actually represent longstanding attempts by others to displace the centrality of the Post Office controlling mail in America. What Leonard and Gallagher both emphasize is how so few of us now recognize the power and sheer monopoly the postal service had in not only disseminating but also powerfully controlling the spread of information. In one memorable episode from the Post Office’s history, Leonard recounts how in the 1830s anti-slavery mail would be sent from Northern abolitionists to the South, instigating fights in hundreds of Southern post offices, even sometimes leading to public burnings of anti-slavery mail. These crises remind us how the Post Office acted as an important arbitrator between the public and the press, becoming an increasingly politicized institution in American civic life.

While Leonard mines important moments from the history of the postal service, Gallagher turns her interest to the realities of Congress’s close monitoring of its services. In 1864, she writes, the Post Office “help[ed] democratize America’s financial services by introducing the department’s money order system.” This allowed a growing middle class to enjoy the privileges of banking usually only “enjoyed by the wealthy.” What prompted this was the need of Union soldiers to send money home to loved ones without worrying that their money would be stolen. Money orders became a key aspect of the moneymaking operations of the Post Office in the 19th century. It was so successful that by 1880 “the orders’ total amounted to several times the postal budget.”

Indeed, some of the most significant changes to the Post Office were instigated by the Civil War—a period Gallagher spends far more time than Leonard excavating. After the war, the Post Office began to accept women and African-Americans as employees, offering not only economic independence but also class mobility to a growing number of Americans. Thanks to workplace transformations like these in the 19th century, the USPS has continued to act, as Leonard writes, as a “beacon for generations of working-class Americans” wanting job security and a chance at class mobility.

The Post Office has also served as a catalyst for advances in technology and transportation. For its delivery of mail across the country, the Post Office helped instigate the construction of more train networks and, later, commercial aviation in the early 20th century. “For much of its history, the American postal service has been at technology’s sharpest edge,” writes Leonard.

In 1970, the Post Office began to undergo another seismic shift—its semi-privatization. President Nixon signed the Postal Reorganization Act, legislation that rebranded the US Post Office as the United States Postal Service. Under this new name, it adopted an oxymoronic quality, acting, as Gallagher calls it, as an “independent establishment of the executive branch,” and most definitely not a “government-owned corporation.” But according to historian Wayne E. Fuller—the author the 1972 study, The American Mail, the “most widely read academic history” on the mail service—this signaled the end of the democratic values so invested in the original American Post Office. It was now, Gallagher writes, “a business like any other great American business.”

These changes enacted by the Postal Reorganization Act are what both Leonard and Gallagher signal as helping contribute to the USPS’s decline. Although the initiatives introduced by the act provided much-needed operational improvements to USPS, the act’s redefinition of the USPS from government institution to part-government business meant that there became a far greater focus on its bottom line. Congress thus more closely monitored the USPS budget. “Both the House and Senate had very powerful, patronage-minded committees that controlled…vital funding, as well as the [post office] department’s policies, rates, wages, job appointments, transportation, pay rise, labor-management relations…right down to the closing of tiny rural post offices,” Gallagher writes. Once more, the fear that the post office will wield too much control has influenced the government’s policy about its operations.

Many critics argue that the USPS has struggled to adapt to the changing times, significantly lagging behind in areas of technology, communications, and e-commerce, compared to fully private carriers, like FedEx and UPS. And they’re right. But the decision to then exclusively patronize the alternatives to USPS ignores the root causes of the troubles that it faces. Gallagher believes their criticisms should be leveled at the “legislators [who] have been in no particular hurry to act” on the beleaguered system. This reluctance, she writes, demonstrates “pressure from the powerful lobbies that pay for political campaigns,” which are wary of allowing, or hostile to, autonomy within USPS.

While Americans might prefer any manner of digital communication to letter writing, the presumption that snail mail no longer has a place in modern society is not correct. What some claim the Internet took away from the mail service it is now returning (in excess), thanks to online shopping. In 2013, packages delivered by USPS grew to 3 billion. According to Leonard, this service is what continues to underpin much of the USPS’s operations in our digital mail-less era. And it is important to be reminded of the USPS’s extant contribution to our democracy. “The strength…is that the postal service provides universal services,” Bernie Sanders recently said. “If you are a big business, you get your mail six days a week. If you are a low-income person on a dirt road in a small town in Vermont, you get your mail six days a week.”

The messages of both Leonard and Gallagher’s studies are clear: The rich, democratic, and incredibly influential origins of the United States Postal Service cannot be diminished. Instead, they must be recognized and celebrated. “The post office is the…most misunderstood of the nation’s original great institutions,” Gallagher concludes. And it’s an institution that can benefit greatly from improvements. Cutting Saturday mail delivery, integrating banking services, and offering customers “electronic mailbox[es]” are only a handful of some of the urgent interventions Gallagher argues to help revitalize—financially and operationally—the strained institution. Unfortunately, Leonard by comparison, shies away from analysis and returns to episodic anecdote, encouraging readers to pine for the glory days rather than ignite critical thought about the future of USPS.

Neither snow nor rain nor heat nor gloom of night: But how will the USPS stand against a neglectful Congress?