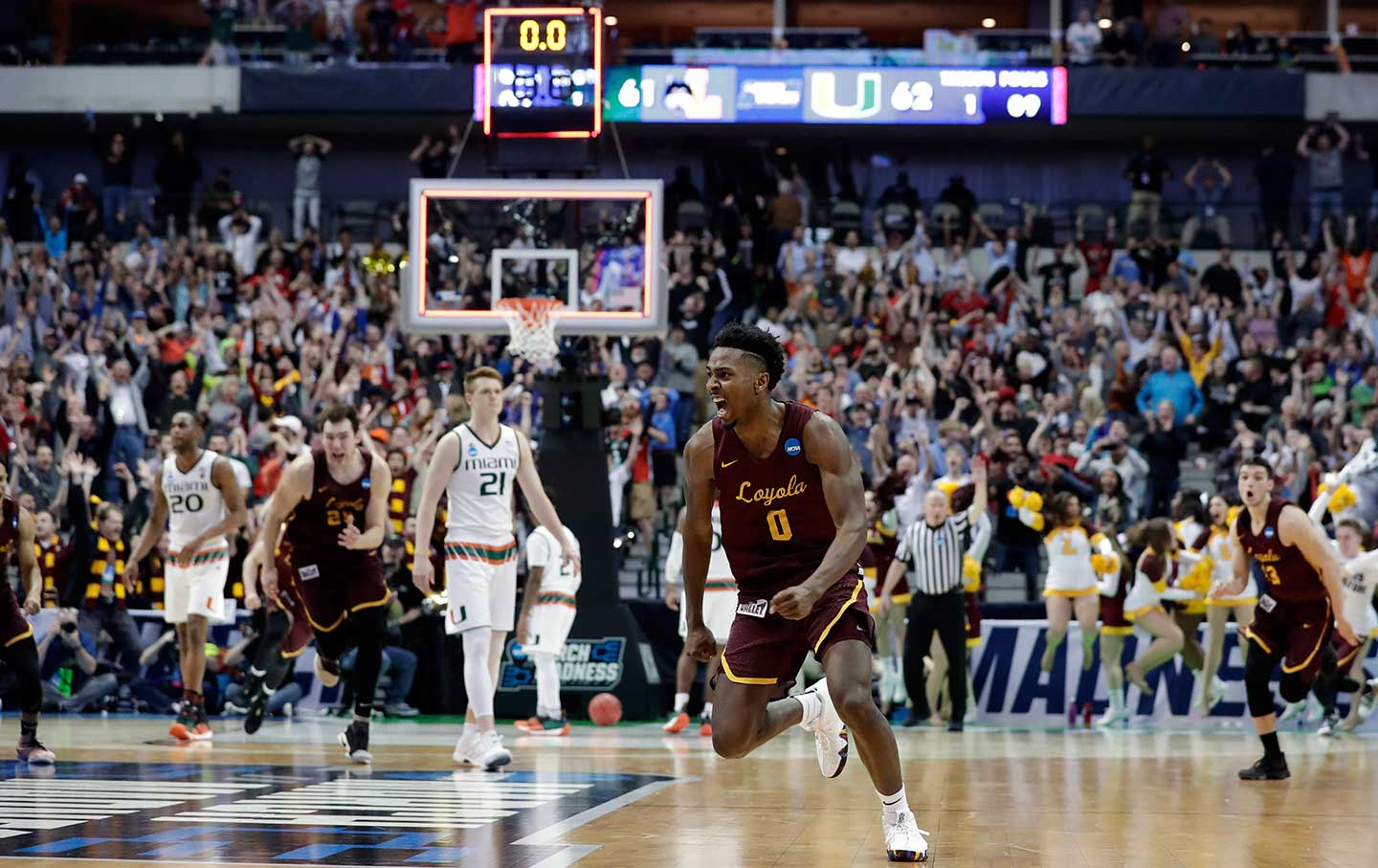 The Loyola University of Chicago’s Ramblers just brought the madness to March by upsetting the University of Miami 64-62 on a last-second three pointer by senior forward Donte Ingram. While the unassuming Jesuit college will understandably go into celebration mode following the win, that sense of triumph has not been present over the last month.

On February 24th, as the team played their last home game at—and no, I didn’t make this name up—Gentile Arena, students were protesting inside the student center right outside the gym. They were raising their voices against the Jesuit school’s plans to spend 18.5 million dollars—as much of two million dollars of that siphoned from student tuition—on a new practice facility that will only be used by four teams (men’s & women’s basketball, and men’s and women’s volleyball).

This isn’t athletics or school spirit. It’s graft. It’s using the excitement around the success of the men’s team as a Trojan horse, to force priorities that most would reject. That there was a stadium protest at a college would be news enough, but there was more. The school’s administration showed its true colors: what it thinks about dissent, free assembly, and students of color who aren’t putting a ball through a hoop.

As the protest was coming to close, the banners were being rolled up, the signs put away, students saw campus police stop and frisk two Black men who had attended the game. They were being accused of illegally selling extra tickets. (Ironically, this game was Loyola’s first sell-out crowd since 2003).

A Black student who was part of the protest, Alan Campbell, went over to act as a witness in case of campus police misconduct, not knowing that he would go from witness to victim. Campbell found himself thrown to the ground, handcuffed and arrested by Loyola police. The video of his arrest, and the police’s rough treatment of another student of color, went viral and has been viewed close to three million times.

Campbell was released from custody but only after student protesters and community members surrounded the police car where Alan was being held for 45 minutes. The video also shows Assistant Dean of Students Jessica Landis in watching the chaos and choosing to do nothing.

The administration is now claiming that they’re investigating the incident—which can be seen plainly on video. They did, however, immediately issue a statement dismissing charges of racial profiling and instead blaming the students for their own brutalization. Writing of Alan Campbell, “The individual resisted and was brought to the ground and restrained for the safety of the individual and others.”

The following Wednesday, Black students called for a walk-out in protest of the brutality by their own campus police. 500 people rallied inside the student center where the arrest took place. Under the slogan and hashtag #NotMyLoyola, students kept up the pressure, holding a packed town hall with 400 people. In the words of one attendee, “It was honestly one of the most powerful, intense meetings I’ve ever been to.” All this was followed by a rally of several hundred people where demands were delivered to the office of the school’s President, Jo Ann Rooney.

Their central demand was that any effort to discipline protesting students should immediately cease and instead of investigating their conduct, the police should be investigated instead. They found that President Rooney wasn’t in her office because…wait for it… she was out of town watching the Ramblers play in their conference tournament.

As one community activist said to me:

These students aren’t anti-sports or anti-athlete, but are raising questions about the university’s priorities. It’s about democracy, racism, and police accountability before its about sports. Most importantly, we need to make sure that protesting students aren’t targeted for punishment just because they stood up to the priorities of the administration and their school’s own police force.

One thing is certain: as the eyes of the sports world now turn to Loyola, folks should be aware that #NotMyLoyola is the rallying cry as students attempt to make sure that the joy of sports doesn’t come laced with the poison of obscene stadium spending and a campus police department more than willing to smash dissent.