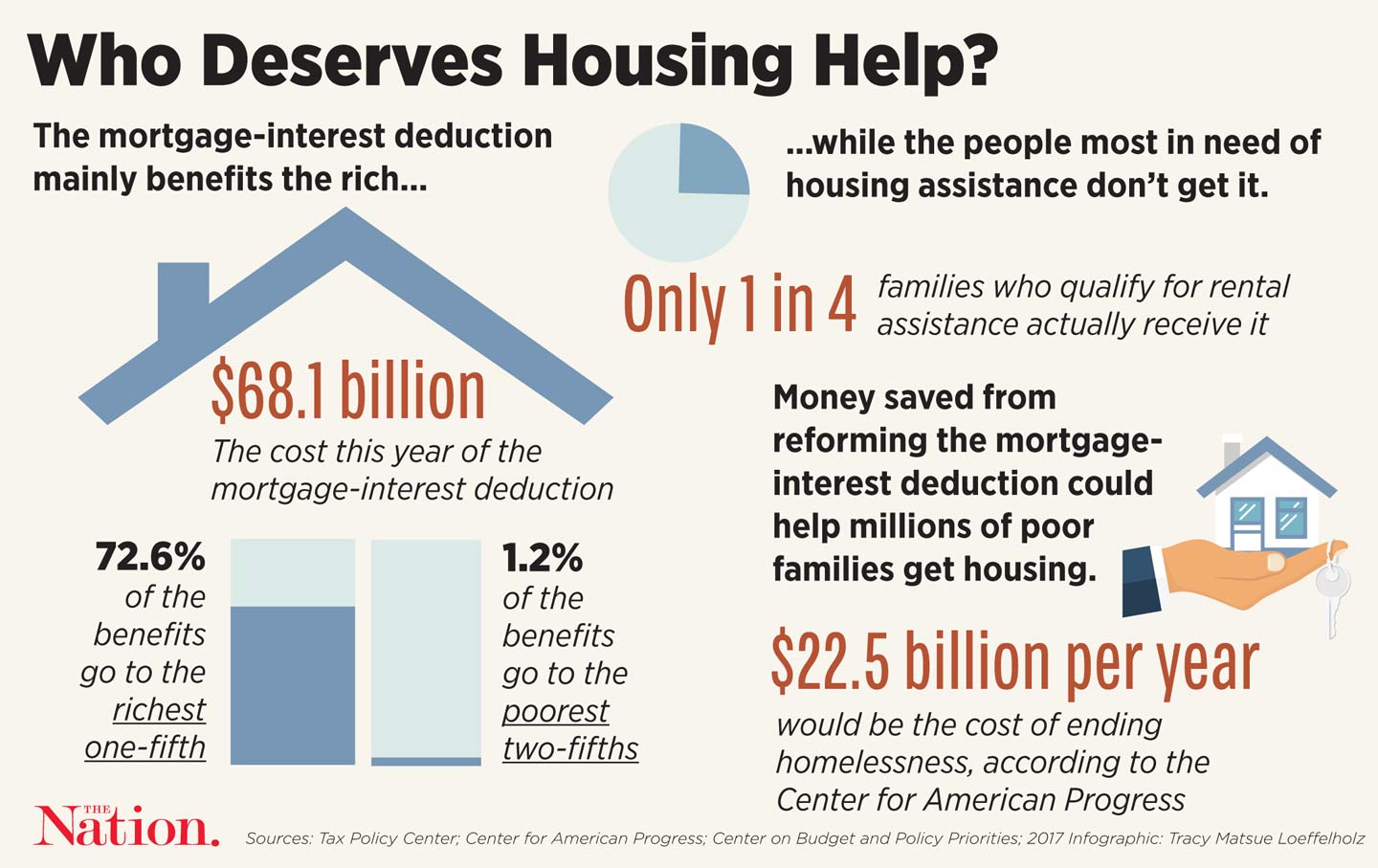 The news, at first, seemed welcome: In their quest to reduce the myriad deductions that Americans can use to lower what they owe at tax time, House Republicans proposed capping the mortgage-interest deduction at $500,000 and getting rid of it entirely for second homes.

The deduction has long been sacrosanct, surviving decades of reform attempts thanks to powerful lobbying groups. But given that the deduction helps those who need assistance the least, it’s ripe for change.

Of the $190 billion that the government spent on housing in 2015, about 60 percent went to households earning more than $100,000. A household earning $200,000 or more received, on average, four times the amount of assistance as one making $20,000 or below. That’s mainly because the mortgage-interest deduction, which allows homeowners to write off some of their loan payments, overwhelmingly benefits the rich. It will cost us $68.1 billion this year, representing one of the largest expenditures in our tax code. But more than 72 percent of that benefit is captured by the richest fifth of the country, while the bottom two-fifths see less than 2 percent. And, of course, the deduction offers no benefit at all to those who can’t afford to buy a home and must rent instead.

Yet it’s the latter group that is in the most dire need of assistance. Rents are rising faster than inflation, so incomes can’t keep up. Just about half of rental households spend more than 30 percent of their income on rent, above what’s considered affordable; about a quarter are spending at least half of their income on rent. 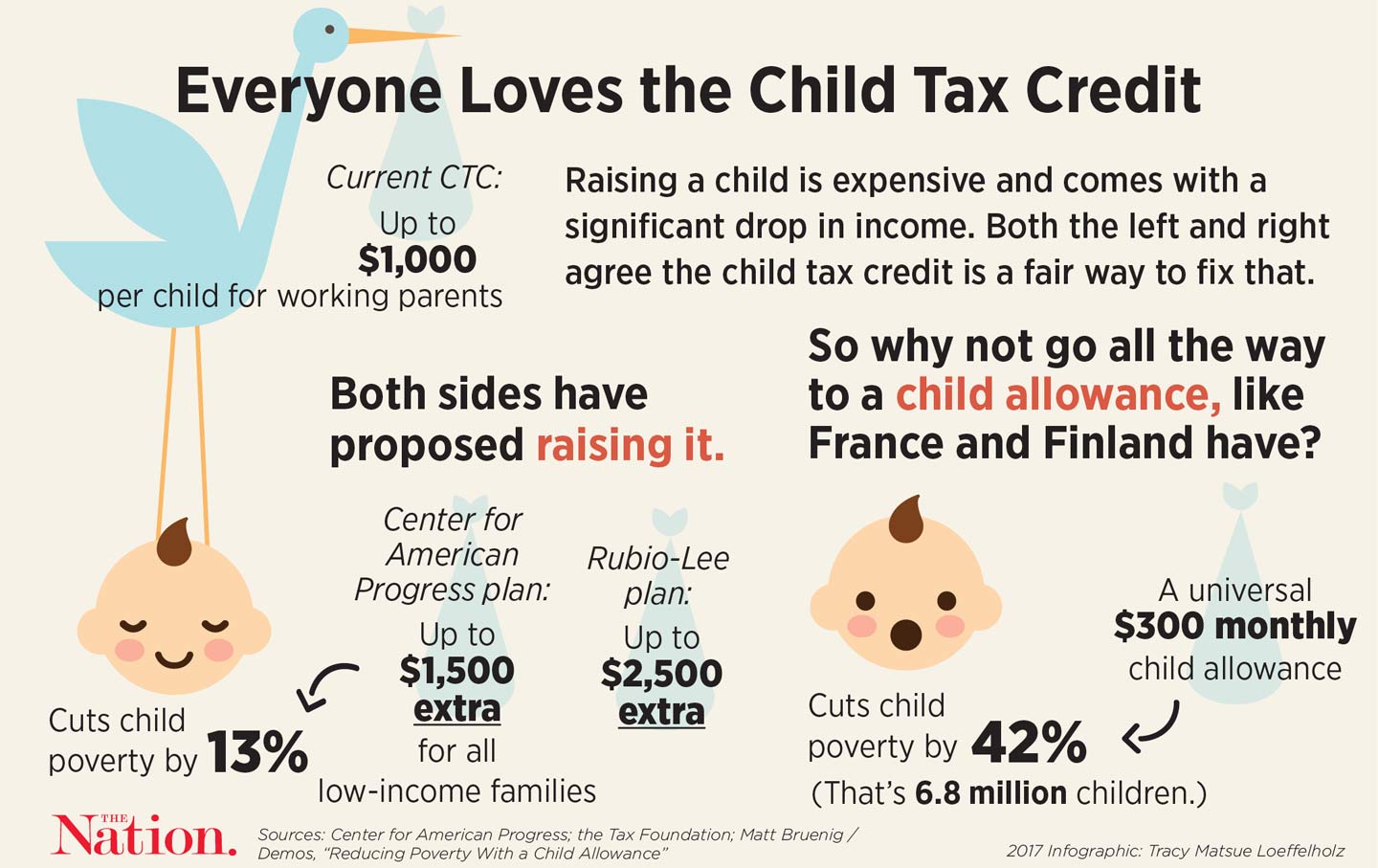 It wouldn’t cost a whole lot to change this picture. Only one out of every four low-income families who qualify for rental assistance actually gets it. Yet it would take just $22.5 billion a year to end homelessness by extending assistance to every needy and vulnerable family in the country.

The deduction wouldn’t even have to be eliminated completely to offer meaningful help to low-income families. The Tax Foundation estimates that capping it so that it applies only to the first $500,000 of existing and future mortgages would raise $319 billion over a decade, mostly by taking away benefits from the richest fifth. Converting it to a credit, which would open up the benefit to lower-income families (who don’t typically itemize their deductions), would raise another $105 billion.

So reforming the deduction would be a more-than-welcome change in tax policy. And, at first, it looked like Republicans had finally gotten on board with the idea. But they’re already botching it. When Senate Republicans unveiled their tax plan, the deduction was left as is. The same was true in President Trump’s own proposal, despite early indications that he would cap it. Perhaps it’s not so shocking that many Republicans have now balked at touching the deduction; when the House unveiled its own bill, the powerful National Association of Home Builders quickly blasted it.

But even if Republicans were to stick to their guns and reform the deduction, they aren’t proposing to use the recouped tax revenue to assist poor families. Instead, the savings would be used to keep down the overall cost of the GOP’s tax plan, which is mostly a giveaway to those who are already wealthy. By 2027, the wealthiest 0.1 percent of the country will get a quarter of the benefits, which translates into an extra $278,370 in their pockets. Meanwhile, the poorest fifth gets just 0.3 percent, or a mere $10 extra. Other analyses have found that many low- to moderate-income families would wind up with a tax increase.

There’s a glimmer of hope to be found in the fact that years of staunch opposition—in both parties—to reforming the mortgage-interest deduction may have finally cracked. But while this regressive tax benefit desperately needs to be changed, it only makes sense if the federal assistance offered to rich families is funneled toward those struggling to make rent. Instead, many Republicans want to get rid of it to hand yet more money to the rich. That would utterly squander a chance at meaningful reform.