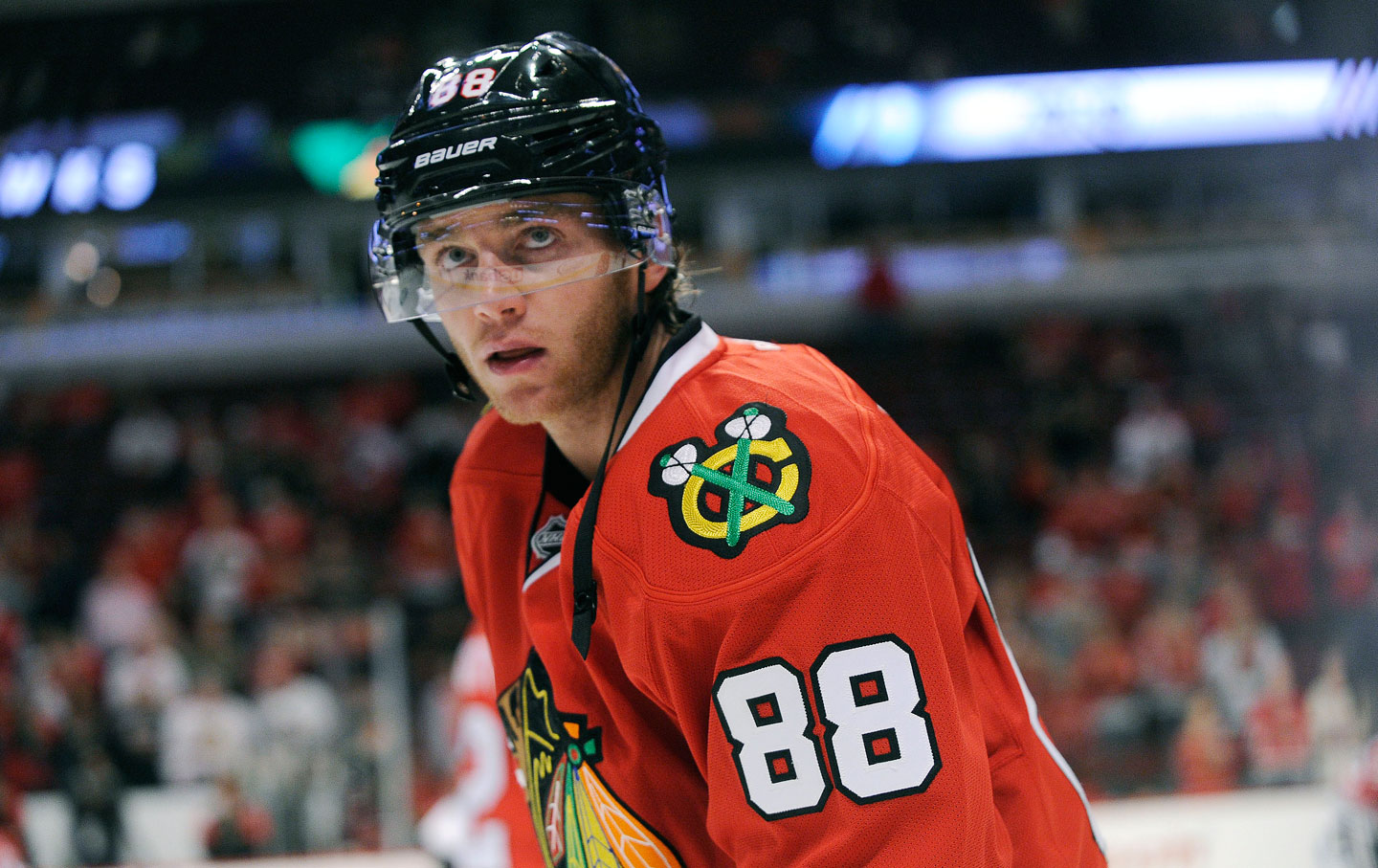 In yet another bombshell, in a case with no shortage of jarring moments, Thomas Eoannou, the lawyer for a woman alleging that Chicago hockey star Patrick Kane raped her on August 2, has resigned from the case. The attorney, who held a shocking press conference Wednesday, brandishing what he called his client’s ripped hospital rape kit evidence bag and saying it had been removed from police custody before being placed on the door of the accuser’s mother, now says he must step down because he “no longer [has] the confidence in the manner and means in which that bag came to my office.” An utterly exhausted-looking Eoannou said, “I looked into it, and I decided to withdraw.”

In this often confusing, very hastily-called presser, Eoannou refused to explain exactly why his confidence was so shaken. He kept it maddeningly vague, saying, “The manner in which [the evidence bag] was presented to me, in which I received it, I’m uncomfortable, and thus I do not believe the version of events is accurate. I called this press conference to let everyone know my concerns and that I’m withdrawing from the case.”

Yet Eoannou also said that the rape kit evidence bag he held up the previous day was real and reminded the press that it was labeled with the accuser’s birthday and identifying information about the nurse. This is all of course confidential information. “The bag is a real evidence bag from this case. There’s no question about that,” he says. But now he has cast doubt, and refused to divulge, how it came into his client’s mother’s possession.

Eoannou’s professed fatigue was in full display Thursday, saying that he hadn’t discussed the issue with his ex-client, and then referred to her publicly by her first name and apologized.

He did imply strongly that his problem was with his ex-client’s mother, and when asked if he now doubted the rape allegations against Kane, said, “One has nothing to do with the other. One has something to do with someone other than my client.”

Exhaustion aside, this was a remarkably cavalier statement. Of course his withdrawal damages his former client, perhaps irrevocably. Of course it will cast public doubt on all of her claims, in a society already disinclined to believe women who come forward.

Immediately Kane’s lawyer, Paul Cambria, jumped on the news, saying that Eoannou’s withdrawal “shows that the entire case is a fabrication” and “there’s nothing you can trust” about the accuser. The previous day, Cambria seized leaked, unverified information about the accuser’s “below the waist” DNA test, trumpeting that she had “a mixture” of sexual partners, none of them Kane. (How an officer of the court can broadcast leaks and not be subject to censure is beyond me.) Cambria did not trumpet that leaks also show Kane’s DNA underneath the accuser’s fingernails as well as on her back, or that she showed up to the hospital with scratches and bite marks on her body.

(In a Friday press conference, the DA Frank Sedita was crystal clear that the investigation into evidence-tampering is continuing and the rape investigation is also ongoing. He would not comment on the case, but did say that with regards to seeing a grand jury, it’s a question of if, not when.)

In addition to Paul Cambria’s repellent pantomime, there is the Patrick Kane social media brigade, treating a rape case like it’s Game 7 of the Stanley Cup Finals. They took Eoannou’s resignation as an opportunity to crow in about how this case, no matter its result, is a tragic turn of events. It’s a tragedy because anytime a rape trial is turned into a circus it only benefits those who want to keep women silent in the face of sexual violence. It’s a tragedy because there are now masses of Patrick Kane fanboys getting “lulz” over a rape case, wallowing in their misogyny publicly and proudly, like a grinning baby in a full diaper. It’s a tragedy because such behavior has a ripple effect that they either are oblivious to or just couldn’t care less about. Reporter Julie DiCaro, who has been covering this case extensively, was threatened with what she described as very specific violence that mentioned places she frequents. She could not go into work on Friday for fear for her personal safety and the safety of her coworkers.

These shameless online armies are not the only thing that’s rank here. We will undoubtedly learn more in the days and weeks to come about what happened in Patrick Kane’s Hamburg mansion on August 2. This story is not over, and if there is one thing we can be assured of, given the last six weeks, there will be more ugliness to come.

Correction: This article originally stated that a rape kit had been deposited on the doorstep of the accuser’s mother. It was an evidence bag that allegedly contained the rape kit. The text has been updated to correct the error.