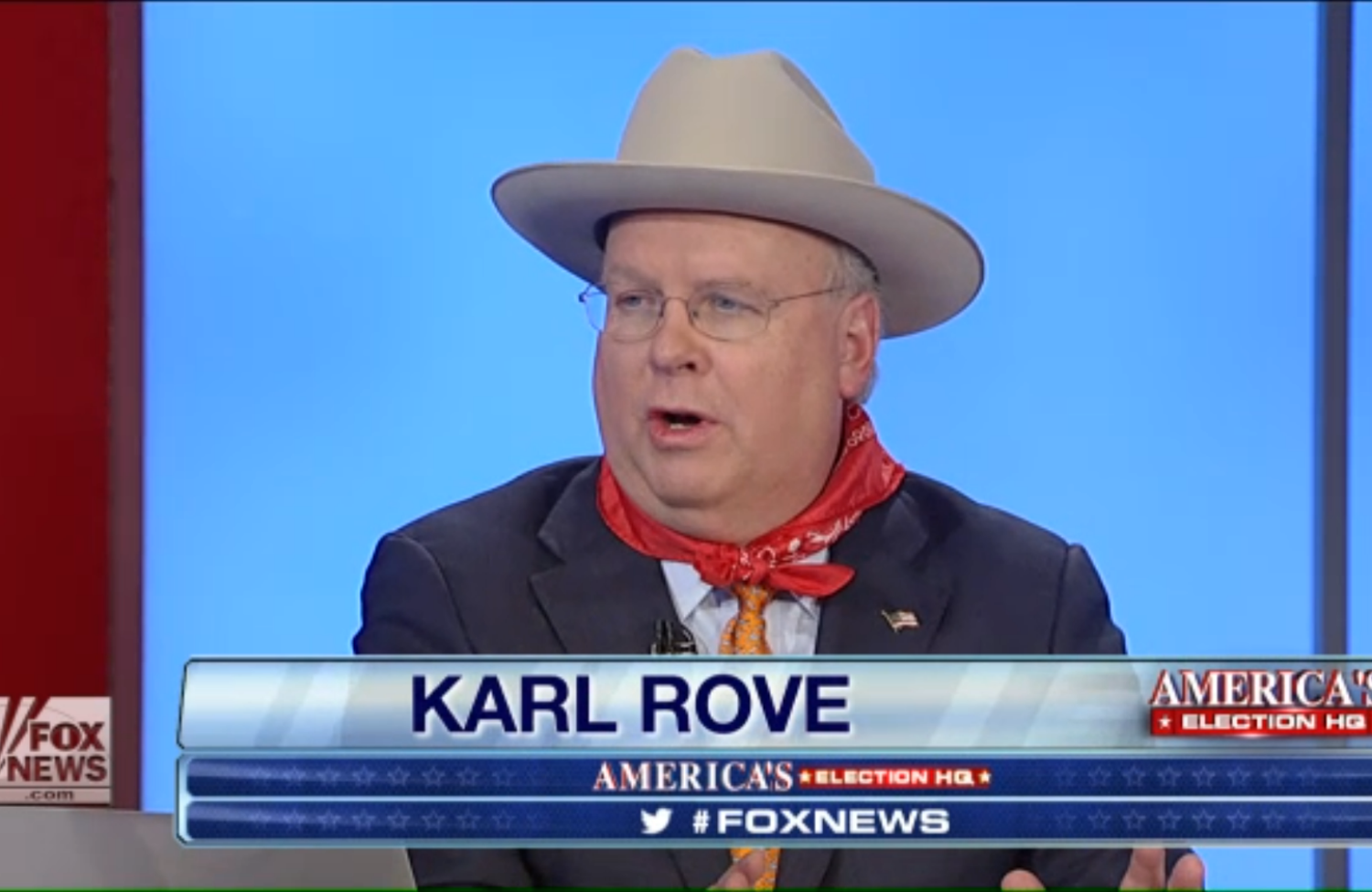 How bad was last night? It was so bad that, for me, the only emotional consolation prize was the small and admittedly puerile pleasure of seeing Karl Rove squirm, again on an election night. It had nothing to do with who won or who lost, but it was the only media moment that made me smile, a piece of spinach caught in the teeth of wall-to-wall Republican gloating.

I say this even as I acknowledge that Rove’s discomfiture paled next to that of 2012, when he infamously insisted on Fox News that Romney had won Ohio, despite the network’s calling it for Obama. Rove’s intransigence forced Megyn Kelly to walk with camera in tow to Fox’s “brain room” for confirmation, where she shot the ham-headed GOP op down on national TV.

Kelly was there again last night when Rove, who should have been doing a victory dance, instead invited the viewer to imagine him bending over for a rectal exam.

As the scale of the GOP victory started to register, Chris Wallace asked Rove what it felt like to lose a midterm election badly, because Rove had experienced George W. Bush’s midterm massacre in 2006, when the Republicans lost thirty House seats, six Senate seats, and both chambers of Congress. How did Bush’s Brain think Obama felt after being hit by this wave?

Every president is “idiosyncratic,” Rove started off and then, looking pained, he added, “It’s like going to a proctologist without an anesthesiologist.”

“Thanks for the metaphor,” Wallace said, wincing, as Megyn said something like “Eeeew!”

Actually, it was the second time Rove, whom W. had long ago dubbed “Turd Blossom,” has publicly likened presidential politics to proctology. In a 2012 Wall Street Journal column, he called getting vetted for the vice-presidential slot on Romney’s ticket (in the wake of John McCain’s choice of Sarah Palin four years earlier) “a political proctology exam.”

Yes, I’m not proud of it, but seeing “the Architect” being embarrassed on TV was my desperate little crumb of solace.

But for the moment, I see the glass 90 percent empty. Nunn and Orman didn’t come close, the “hairless serpentine” in Florida topped Charlie Crist. Scott Walker and even Sam Brownback survived. The Dems’ would-be Southern firewall, Kay Hagan, went under after a solid year of street demonstrations against her opponent. Voter suppression, which a couple of late court decisions limited for this election, will only get worse next time, when the delayed laws take effect, and the media will largely ignore the issue, again. How much of the vote yesterday was lost to voter ID, missing voter registrations and malfunctioning machines we’ll probably never know.

But at least Megyn Kelly thinks Karl Rove is kinda gross. That’s something. Isn’t it?