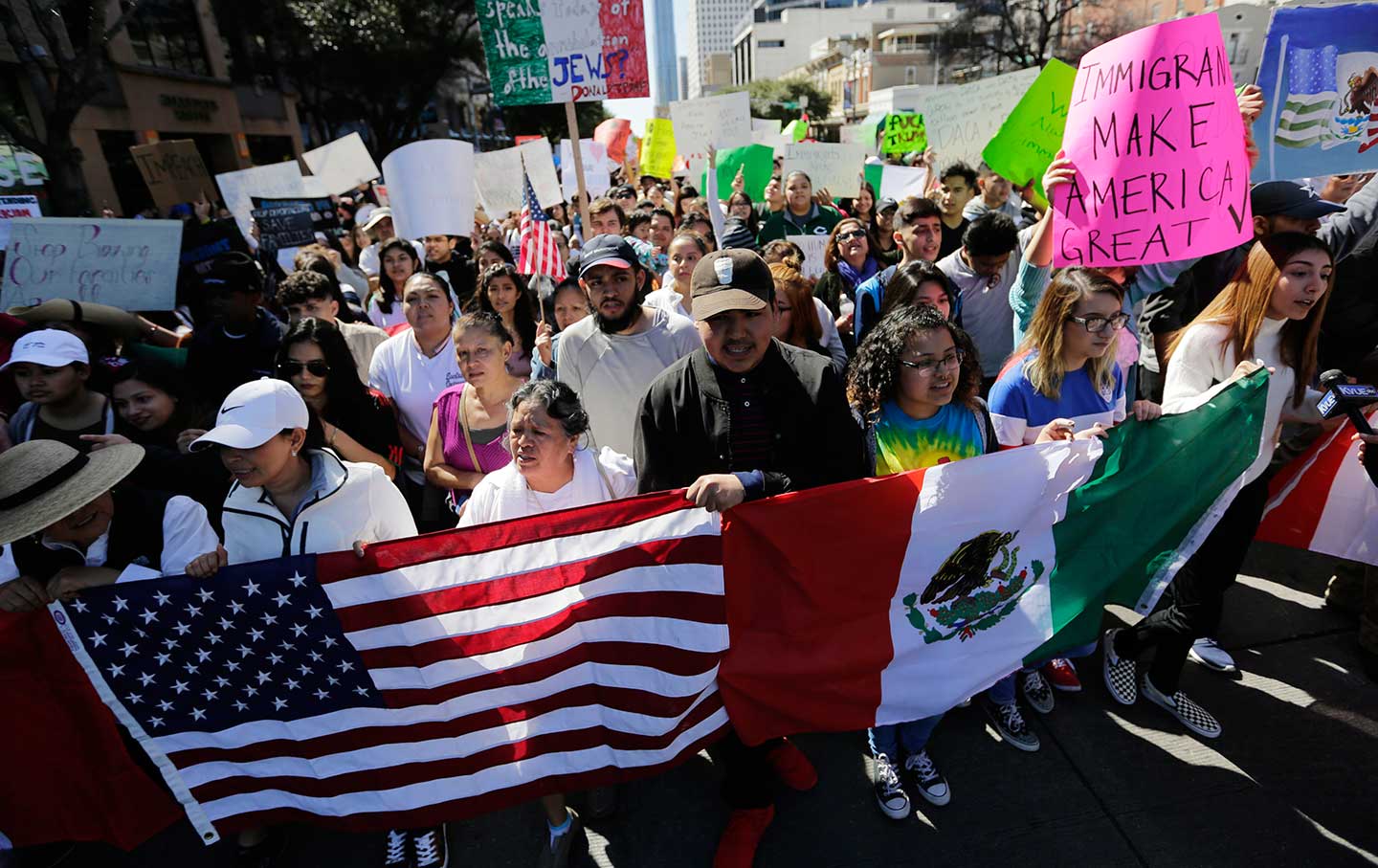 A group marches through downtown Austin heading to the Texas Capitol during an immigration protest, Thursday, Feb. 16, 2017. (AP Photo/Eric Gay)

This Monday, activists from Texas and across the country will gather in Austin for day of action to fight a law that promises to make life much more dangerous and difficult for immigrants, people of color, and anyone else likely to be profiled and targeted by police.

Scheduled to go into effect September 1, Texas’s Senate Bill 4 would allow local law-enforcement personnel to question the immigration status of anyone that they detain for any reason. It would also punish local officials who seek to limit cooperation with federal immigration authorities, effectively preventing them from prioritizing the needs of their communities over the federal government’s anti-immigrant agenda. The situation is so dire that the ACLU issued a travel advisory for the state of Texas shortly after the law’s passage. El Paso County, its Sheriff Richard Wiles, and several organizations and Texas cities have sued to prevent SB 4’s implementation. Activists have called it the “show me your papers” law and assert that it’s likely to result in rampant racial profiling.

On top of the damage it will do in Texas, this fight has national ramifications. As the organizers of Monday’s action point out, if we don’t loudly denounce racist laws like SB 4, emboldened conservative state legislatures across the country could follow Texas’s lead and double down on President Trump’s inhumane policies.

Whether or not you live in Texas, here’s how you can pitch in to Monday’s day of action:

1. If you’re in Texas and you can get to Austin, head to the Texas State Capitol this Monday, May 29. Participants are asked to wear red to show their support. The day of action will begin at 9:30 am and will consist of a full day of activities including teach-ins and rallies. You can find more information and RSVP here.

2. Spread the word on social media. Use the hashtag #SB4isHate and let your friends and family know what’s going on. Organizers have composed some sample tweets in English and Spanish to help you out. Here are a few you can copy and paste:

I pledge my commitment to our Texas community as they RESIST the racist SB4! #SB4isHate #HereToStay http://bit.ly/2rAfXPH

Showing our support for Texas to make sure laws like SB4 don’t come into our state! #SB4isHate #HereToStay http://bit.ly/2rAfXPH

3. Donate. Immigrants and allies across the country are traveling to Texas on Monday and they need places to stay, food to eat, and money for travel. Your donation helps ensure a massive show of resistance.

4. Learn about and support the national and local groups on the ground, most of them immigrant-led organizations that work day-in and day-out for dignity and justice for immigrants and others targeted by racist right-wing policies. Here are a few involved in Monday’s action:

United We Dream is the largest immigrant-youth led organization in the country, made up of over 100,000 immigrant youth and allies and 55 affiliate organizations in 26 states.

The Workers Defense Project is a membership-based organization based in Texas that “empowers low-income workers to achieve fair employment through education, direct services, organizing and strategic partnerships.”

Immigrants United is a non-profit based in Austin that empowers new leaders and works for better living conditions in immigrant communities.

Education Austin is the labor union for employees of the Austin Independent School District.

University Leadership Initiative is an undocumented youth-led organization that advocates for the rights of the undocumented community.