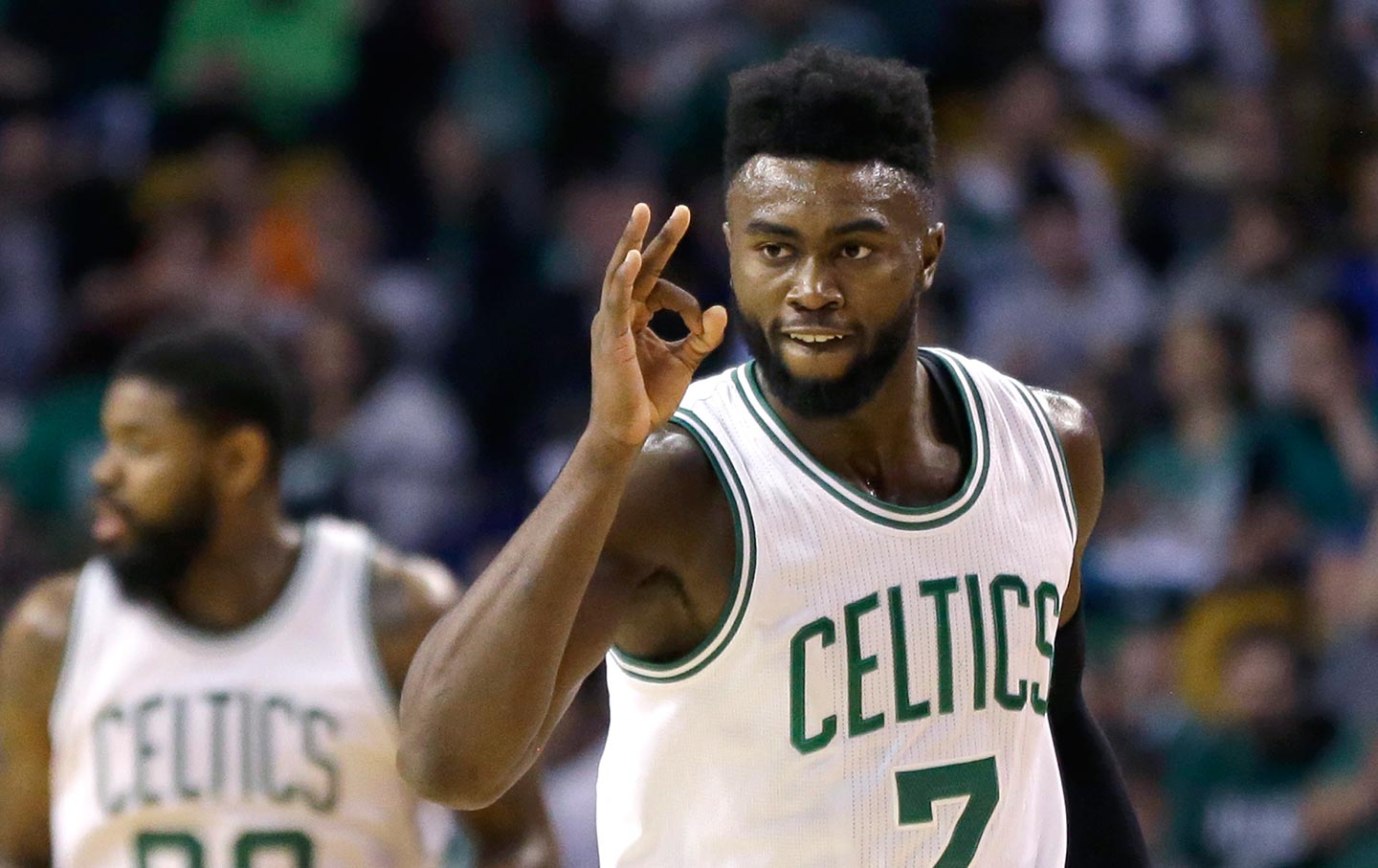 Roughly 18 months ago—as Colin Kaepernick was peeling back people’s eyelids—I was told by a friend at Cal-Berkeley that there was an NBA rookie—yet to play a single minute of pro ball—who was going to rock the sports-politics landscape. “He’s NBA talent, no question,” I was told, “But he’s also like those political athletes you write about. A lot of the same professors and lecturers at Cal who have been dialoguing with Kap [Colin Kaepernick] rave about this kid.”

He told me the young man’s name, Jaylen Brown, and I immediately put it out of my mind for two reasons. First, Kaepernick was setting the sports world on fire, and NBA rookies who impressed their college professors was not at the forefront of my mind. Secondly, he had been drafted by the Boston Celtics, and I am some combination of genetically or behaviorally conditioned to ignore anyone doing anything while wearing that cursed Celtic green. I had too many young memories of Larry Bird tearing out my heart and felt too set in my ways to change.

But damn, was I wrong. Jaylen Brown, now in his second year and already a budding star, just gave an extensive interview with The Guardian, and everything that those professors pointed out were on display: a sense of history, a belief in resistance, a systemic critique of racism and poverty, and a contempt for a certain orange demagogue who uses race to rule. People of course should read the entire interview, and all the props in the world to Donald McCrae for uncorking an article called “Jaylen Brown: ‘Sport is a mechanism of control in America.’”

Most of the media have missed what is truly bracing about this interview, focusing on Brown’s statement that Donald Trump is “unfit to lead” this country. But that is small potatoes compared to the aforementioned systemic critique of racism and poverty that Brown—again at age 21—brings to the table. It is common currency now to call out Trump’s bigotries, implying that if only he wasn’t in office, oppression would suffer a mighty blow. Brown does not support that wafer-thin view. Instead he references “a thesis” he wrote at Berkeley about the intersection of sports, race, and social mobility, saying:

There’s this idea of America that some people have to win and some have to lose so certain things are in place to make this happen. Some people have to be the next legislators and political elites and some have to fill the prisons and work in McDonald’s. That’s how America works. It’s a machine which needs people up top, and people down low. Even though I’ve ended up in a great place, who is to say where I would’ve been without basketball? It makes me feel for my friends. And my little brothers or cousins have no idea how their social mobility is being shaped. I wish more and more that I can explain it to them. Just because I’m the outlier in my neighborhood who managed to avoid the barriers set up to keep the privileged in privilege, and the poor still poor, why should I forget about the people who didn’t have the same chance as me?

As far too many people have set the bar of “the resistance” lower than Bill Kristol’s big toenail, or believe that a terrific speech by Oprah Winfrey means that her presidential prospects demand immediate debate, this statement by Brown raises the level of discussion at a time when it is sorely needed. Without a broader critique of the injustices baked into the DNA of this country and without examining how these issues manifest themselves in the 21st century, true change is impossible.

What has made Kaepernick so threatening is that his perspective on police violence is not one of saying, “There are good cops but bad apples.” It’s a systemic critique. Similarly, Jaylen Brown is saying that if you want to understand Trump, racism, or poverty, or even sports, you need to grasp how the system is designed so certain people fail, in order to have lucrative for-profit prisons operate at 100 percent capacity.

You need to understand that access to a great education will never be offered as long as certain un-unionized fast-food restaurants need to have someone at the cash register. You need to wrestle with how manifestly twisted it is that the way out of this trap is seen through the prism of sports instead of a relentless struggle for even a measure of justice.

Jaylen Brown could mark the beginning of the evolution of the activist athlete. Based upon his ideas, he could be attempting to bring a lot of other players along for the ride. I will never again disregard this new generation, even if they happen to be wearing the Celtic green.